This past summer I watched all four Lethal Weapon movies in as many days and I learned a lot—about myself, about movies, about hair in the 80s, about life in general—but possibly the most important thing I learned, something that most of us have forgotten since about 2004, is how immensely likable Mel Gibson used to be. Anyway, the mid-2000s did happen, and as a result, Mr. Gibson fell somewhat out of favor and popularity. Needless to say, at the end of this particular week in history, I did not expect him to provide a reassuring voice. 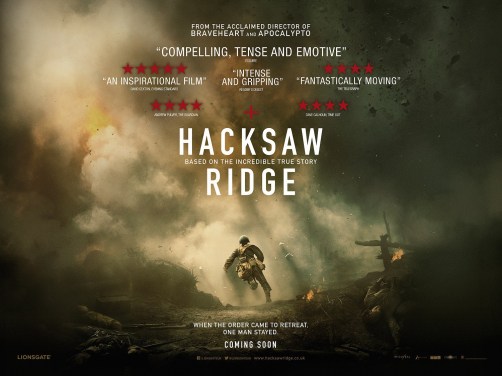 The Plot: When the Japanese attack Pearl Harbor, Desmond Doss (Andrew Garfield), a small-town Virginian Seventh-Day Adventist and avowed pacifist, feels the same sense of duty and conviction as everyone else he knows, and soon enlists in the US army as a medic. Throughout his training, Desmond’s refusal to handle a firearm makes him enemies throughout his platoon, as his brothers-in-arms (or not arms in Desmond’s case) doubt whether he would be able to defend them on the battlefield. Despite his tense relationships with the other men in his unit, and even a court martial, Desmond makes it through basic… to Okinawa.

For those of you unfamiliar with the Second World War, it was not good. You could make statistical arguments about where was the worst place to be deployed. The European sphere had its fair share of horrors on both Eastern and Western fronts, and in Northern Africa and the Mediterranean. The Pacific combined jungle combat with a society that viewed surrender as a thing worse than death. Who can say which was worse? There’s no convenient scale or unit of measurement for human suffering. The Battle of Okinawa lasted from April to June in 1945 and saw nearly 200,000 military casualties (and an uncertain number of civilian suicides). It was to be the last major island battle before the US military’s final push onto mainland Japan, and ultimately served as one of the major factors in the decision to drop the bomb. At that point in history, Okinawa was one of the very worst places in the world.

Twenty-five men received Medal of Honor citations for their valor on Okinawa, and Desmond Doss was one of them. He remained behind during an American retreat off Hacksaw Ridge so he could tend to the wounded. Even with the Japanese patrolling the battlefield, executing any Americans they found alive, Doss singlehandedly evacuated seventy-five wounded soldiers one at a time to safety, even having to lower them down a four hundred-foot escarpment. He was the first conscientious objector to win the Medal of Honor, a distinction currently held by only two other men, both medics in Vietnam.

This episode serves as the crux of the movie’s dramatic climax, and I suppose I ought to start talking about the actual movie, and not just the history it depicts. Much as I have come to enjoy Mel Gibson as an actor, especially in movies from the 1980s, I have shied away from his directorial efforts. Braveheart has some serious problems, and Apocalypto should have been a lot better than it was, and then of course there’s The Passion of the Christ. Gibson the director tells larger-than-life stories, frequently strays into the realm of heavy pathos, and usually compromises the messages of his movies with extreme, over-the-top violence. These issues do not plague Hacksaw Ridge, for the most part. Gibson does not attempt to make an icon out of Doss, he doesn’t promote Doss as a legendary figure whose example we can all follow, and that’s where the movie’s successes begin. Desmond is an instantly likable, easily relatable character. Hacksaw Ridge could simply have been a politically pandering, ostentatiously “inspirational” story in which its main character was more an archetypal figure than anything else, a kind of conglomerate of moral ideals rather than a human being. Gibson’s direction, along with Garfield’s performance and an excellent script from Andrew Knight and Robert Schenkkan, manages to create a complex character from what could so easily have been a stereotype.

My only potential criticism concerns the film’s portrayal of violence. Now, as some of you may know, I am not a squeamish person. I have an incredibly high threshold for violence in movies. The quantity or extremity rarely bothers me (although the justification of it, or lack thereof, frequently does). Hacksaw Ridge made me feel physically nauseous.  It was intense. In the moment, it felt uncalled for, over-the-top, and in other ways typically Mel Gibson, but upon reflection, I understand why he did it that way. Aside from trying to capture the unparalleled horror of war on Okinawa, the violence operates as an aligning agent, allowing the audience to absorb Desmond’s perspective further. He’s a devout Christian who abhors violence, who believes in the immortality of the soul, but selflessly endangers himself to protect and heal the body. Gibson uses the violence to create a unity between the body and the soul in Desmond’s eyes, the suffering of one reflecting that of the other, the preservation of one ensuring the perpetuity of the other. So, while shocking and gross and at times genuinely sickening, it serves a necessary thematic and narrative purpose.

It came at a good time, this movie. I found it oddly comforting to witness a true story about someone who actually did good things, despite the other horrors onscreen. Hacksaw Ridge—like its central character—doesn’t pass judgment on anyone, American or Japanese, soldier or civilian, pacifist or not, Christian or otherwise. It just reassures us that good people do exist, and they perform their most outstanding acts under the worst imaginable circumstances.