The Plot: After playing a last-minute gig at a sketchy club in Middle of Nowhere Oregon, a punk band finds themselves in a difficult situation when the lead singer, Pat (Anton Yelchin), accidentally witnesses a murder. Now trapped in the club with a gang of skinheads—led by the calmly unsettling Darcy (Patrick Stewart)—the band must put their survival skills to the test if they want to escape. The Nazis, of course, would rather kill a few more punks than be found out. 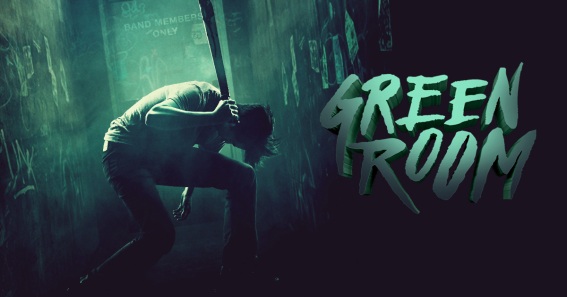 Film Science
This shot never appears in the movie, but it makes for a killer poster, eh?

Green Room comes to us from Jeremy Saulnier, the writer/director of 2013’s Blue Ruin, a brutally violent movie about hometown grudges and what happens when people finally act upon decades-old blood feuds. Blue Ruin is as sad and thought-provoking as it is violent, and the violence—while extreme—is never over-the-top. It perfectly complements the story and its themes. As such, and as I stated in my review of that movie last year, I really liked Blue Ruin.

Like its predecessor, Green Room quickly plunges into a primeval struggle for survival. Its tensely realistic setup gives way to what is basically a survival horror movie in the second act. Fortunately, it hangs onto that “tensely realistic” aesthetic. Saulnier shies away from cinematic and narrative conventions of plot and character, leaving the viewer with an uncomfortably realistic movie. As an audience member, criticizing characters for making irrational decisions under duress is one of the easiest things in the world. Throw on any horror movie, and at some point you’ll find yourself saying, “Don’t go in there!” That doesn’t happen while watching Green Room. Its atmosphere of panic and overwhelming threat is so contagious that you can’t criticize Pat and his friends for any of the decisions they make, rational or otherwise. With a deftly unassuming screenplay brought to life by a perfect ensemble cast, Saulnier manages to make us feel everything that the characters feel.

And that really sucks. 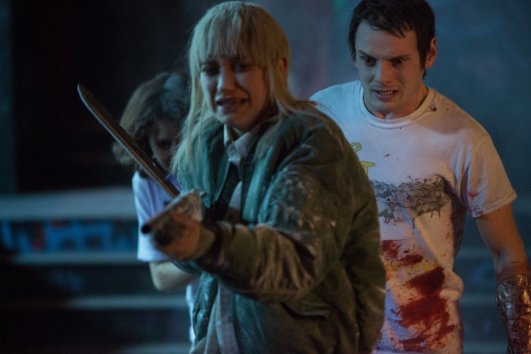 Film Science
It sucks so much.

Seriously, this movie takes all the fun out of both machetes and dogs. The violence is some of the most brutal and convincing I’ve ever seen on film. This makes it much more disturbing than any slasher movie. Darcy orders his men not to use guns, because they intend to clean up after themselves and not leave any evidence, and they don’t want to have to dig bullets out of walls and re-plaster everything. Understandable. So, they stick with blades and attack dogs, and Saulnier does not shy away from showing these consequences. If you decide to watch Green Room, maybe don’t eat anything while doing it, okay?

While the violence is, in many ways, the whole point of Green Room, it’s not the film’s greatest strength. Saulnier does a really excellent job realizing his skinheads. Humanizing Nazis is a tough thing to do, but he pulls it off. I think, as a culture, we demonize people way too much, and in the process forget that our enemies and opponents are just humans. Saulnier doesn’t forgive his skinheads or ask us to, because they commit horrendous acts of violence against innocent people, but he does make them real people instead of faceless baddies. Like everything else in the movie, the skinheads are very realistic. There are a few true believers on top and scattered throughout the organization, but mostly the gang is just comprised of misguided kids. They live in the middle of nowhere, they have limited education, and their lives have no real hope of improving. The Nazi movement gives them purpose and direction and it tells them that, despite everything, they are innately better than other people. This happens all the time, both throughout history and today, and it’s important to understand that about people before just writing them off as subhuman monsters. 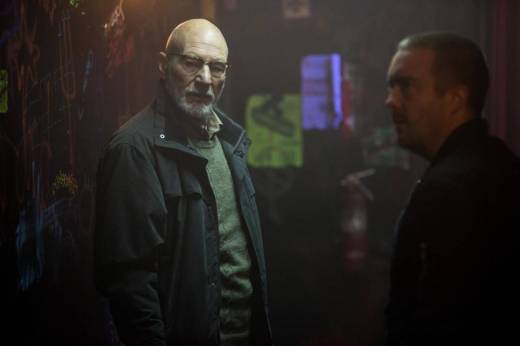 That’s the film’s great strength. Despite making movies that are so violent and disturbing, Saulnier strikes me as one of the most empathetic filmmakers in the biz right now. He understands every horrible angle of a situation, and makes the viewer do the same, much to everyone’s terrible discomfort. All of my criticisms of Green Room are completely subjective. There are a few narrative elements that I didn’t like, but I can’t fully fault them. Green Room achieves everything that it wanted to flawlessly, I just personally didn’t like some of what it wanted to do. As I said, in many ways, the violence is the point of the movie, and with that in mind, I think Green Room has less to say than its predecessor. If Green Room is about violence—the acts of committing and enduring it—then Blue Ruin is about why violence is committed and endured, and so is a thematically deeper movie.

As a closing, slightly unrelated note, I really miss Anton Yelchin, who died in a freak accident earlier this year at the age of 27. Green Room was one of his last films and, like so many others, exhibited a great talent. He was just on the cusp of breaking onto the A-list, and in his case it would have been well deserved. His performance in Green Room is of the rarest kind. His character spends most of the movie panicking and losing a lot of blood (remember what I said about Green Room taking all the fun out of machetes?), and while doing this, without much characterizing dialogue, he creates a richly realized and relatable figure out of Pat. It’s a wonderfully understated showcase of his talents. He’ll be missed.