“Octoberween is a celebration of life and death, of the very foundation of our humanity.”

With that in mind, I bring you a comprehensive history of Scooby-Doo.

In 1969, four meddling kids and their talking dog first graced the television screen, and with them they brought a gaggle of galloping ghosts, a spooky space kook, a terrorizing amusement park robot, and a mummy. Well, actually, MAJOR SPOILER ALERT HERE none of those monsters were real; they were just cranky old coots in disguise, hoping to scare off the locals in order to either A) find buried treasure, or B) make big on some real estate scam[1]. Oh, and the robot was totally real. No one behind that mask. The kids were in grave danger.

It’s a silly premise, aimed squarely at the enigmatic youth of the late 1960s/early 1970s, featuring dialogue perforated with superfluous “likes,” mandatory puns, and a wanton overabundance of the word “groovy,” but it nonetheless became one of the longest-running and most beloved television franchises in history. Something about it just clicked with children across the generations. Since I have a hard time believing the writers really did manage to connect with the youngsters solely through the word “groovy,” and since the mysteries themselves are entirely predictable[2], I’m left to explain this show with another example: NCIS. You don’t go back every week for the mysteries, but for the characters.

We all know Fred, Daphne, Velma, Shaggy, and Scooby-Doo. Their abundant proliferation in pop culture is unparalleled by any other original animated characters for children[3]. These five mystery-solving friends have known illustrious success and popularity, and part of the beauty of it—part of what has made them consistently accessible to children for five decades—is the very predictability of the original show. Scooby-Doo, Where Are You?, which premiered in 1969 and ran for two-and-a-half seasons before getting rebranded as The Scooby-Doo Show, features over two dozen episodes with the exact same plot, but a different monster each time. Well, a slightly different monster. Nearly every episode features a ghost of some kind. There’s a ghost pirate, a ghost miner, a ghost ghost, the ghost of Geronimo, a vampire ghost, a werewolf ghost, a space ghost, a caveman ghost, a deep-sea diver ghost, a bedsheet ghost, a ghost puppeteer… you get the idea. Occasionally they branch out to include witches and mummies and the like. My favorite episode from the original series is “A Gaggle of Galloping Ghosts,” which, despite its entirely misleading title, features zero ghosts, but instead the gang gets trapped in a castle with a vampire, a werewolf, and a Frankenstein monster. While predictable and repetitive, these episodes have a genuine spirit of fun, spooky entertainment for kids that’s impossible to fault. I love Scooby-Doo, Where Are You?, but then… The Scooby-Doo Show. Oh boy. 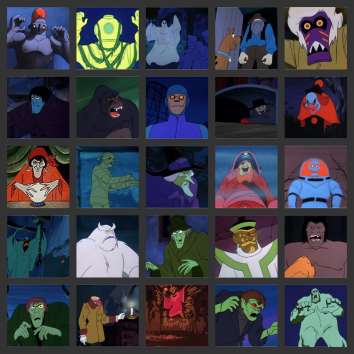 So, season three of Scooby-Doo, Where Are You?, was produced several years after the second season and my goodness does it ever have some problems. And by, “does it ever have some problems,” I of course mean, “every episode is terrible.” How terrible? So terrible that after three episodes, they canceled the show and rebooted it as The Scooby-Doo Show. Desperate to break away from the formula, wrongly blaming said formula for season three’s poor quality, the showrunners decided to spice things up by transforming Mystery Incorporated into a globe-trotting gang of super-sleuths. No longer do they simply drive around in their garishly colored Mystery Machine; now they travel the world to hunt down wrongdoers, reaching such outlandishly far-flung locales as Turkey[4], Brazil, Scotland[5], the North Pole[6], the Bermuda Triangle[7], and even Canada, because that’s real freakin’ plausible.

Also in this period are the New Scooby-Doo Movies, which aren’t actual movies, but are double-length TV specials featuring popular guest stars. They vary dramatically in quality. During this time, Scooby and the gang teamed up with the likes of Dick Van Dyke, The Addams Family, Josie and the Pussycats, The Harlem Globetrotters, the Three Stooges, and Don Knots, but the highlights are definitely the two Scooby-Doo Meets Batman specials. The recurring characters of Batman, Robin, the Joker, and the Penguin are all heavily influenced by the incredibly popular Batman television series of 1966 starring Adam West and Burt Ward. Unsurprisingly, marrying these two deliciously campy children’s shows begets nothing but good, family-friendly fun and endless puns. Unfortunately, most of the movies follow the example of The Scooby-Doo Show, attempting to spice up the premise with cheap gimmicks and celebrity shortcuts.

Yes, Scooby-Doo jumped the shark before it was cool[8].  Someone clearly pointed out to the writing team that this was, in no arguable way, a good idea. So, shortly after Scoob’s globe-trotting adventures, he and the gang return stateside to the loving arms of the Mystery Machine, and the by the late 1970s, the show had returned to its old roots… with the unfortunate addition of a new character, Scooby-Doo’s cousin Scooby-Dum[9]. Scooby-Dum was the first of Scooby’s extended family to make an appearance, but unfortunately not the last. Despite only appearing in four episodes, Dum left an irreparable mark on the show, and managed, in part due to his presence in the opening title sequence of every episode, to drill himself into the collective consciousness of avid Scooby-Doo viewers, of whom there are many, I’m sure. With his insufferable “catch-phrases”, strained hillbilly accent, and general inanity, it’s no wonder his tenure was cut short. Unfortunately, still sensing a staleness to the old formula, the showrunners felt the need to replace Scooby-Dum with another new sidekick, a far worse terror…

But more on that next week when the Octoberween Scooby-Doo Saga continues. While Scooby-Doo did manage to go downhill pretty damn fast, nothing will ever sully those first fantastic seasons, which brought us this lovable gang of mystery solvers, and a few great monsters, too[10]. Next week I will continue my comprehensive history of the character with a sometimes-horrifying, sometimes-wonderful foray through the 1980s.

Warner Bros.
And if I can, I will never mention Scooby-Dum ever again.

[1] Interestingly, of the twenty-seven villains featured in the original run of Scooby-Doo, twenty-three of them devised their elaborate schemes solely for the illegal procurement of money. One of them did it to win a dog show, but we needn’t speak of him.

[2]The man behind the mask is almost always the only adult the kids meet in the episode. In the seventh episode, “Never Ape an Ape Man,” they visit a film set for a movie about an Ape Man, which is being plagued by mysterious attacks from an Ape Man, identical to the one in the film. The culprit? You guessed, it’s the actor who plays the Ape Man in the movie. He’s literally just wearing the costume he has to wear for his job.

[3]Probably, I think; I dunno, and I’m not going to bother to try to corroborate that.

[4]Invited for some inexplicable reason to assist in a major archaeological dig, Scooby and the gang are among the first in millennia to visit a buried city. Scooby and Shaggy spend most of the episode crashing into priceless artifacts and trashing this spectacularly well-preserved site.

[5]In an episode that features what is without a doubt the most offensively bad Scottish accent I have ever heard.

[6]Where they face a dinosaur, for some reason.

[8]A whole year before Henry Winkler did it. It is also worth noting that Scooby rides water skis while being chased by a shark in the opening title sequence of every episode of The Scooby-Doo Show.

[9]Mistakenly referred to as Scooby’s brother and cousin in two episodes.

[10]Who can forget the Creeper?