Welcome to Octoberween, everybody! For this month we will be looking at films of the horror genre, or have a general air of “Halloween” to them. Let’s start it off with a mind-warping psychological thriller from Japan, known as “Perfect Blue.”

Satoshi Kon is one of my favorite filmmakers, and his films tend to be pretty dark, adult, and often bend reality through the magic of animation. One of my favorite film watching experiences that I’ve ever had was watching the Satoshi Kon anime, Perfect Blue. I was watching with a good friend and fellow anime lover, and we were both watching the movie for the first time. Perfect Blue is a rather intense psychological thriller and we  “oohed” and “aahed” in unison as the plot took its many twists and turns. Throughout the viewing, both of us speculated about what was happening on screen and were equally shocked and delighted at the films conclusion. Sharing such an exciting film experience with a good friend is what made that moment so, well, perfect! It was more the setting of the viewing than the film itself that makes me love this movie, so forgive my inherent bias. However, the film is excellent in its own right. It is a great psychological thriller, with impressive stylized animation, and a plot that will keep you guessing until the end. In addition to this, it provides a really good thematic example of the male gaze inherent in the media and the ideas of self-identity of women in such an environment. 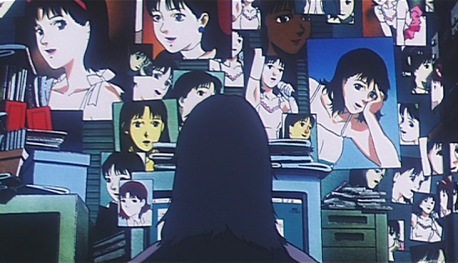 Madhouse
You know, the production company’s name goes quite well with this film…

First, let us talk about some of the aspects that make this film a top-notch psychological thriller. Perfect Blue is about a woman named Mima Kirigoe who ends her career as a pop idol in order to become an actress. After doing so, she starts getting threatening letters, she finds a website about her called “Mima’s Room” with information about her that only she would know, and people around her start getting killed. Things get even worse for her when she ends up filming a rape scene in a detective drama called “Double Bind”, which adds to her mental stress and ever changing image from a pop idol. She begins to lose sight of what is real. The audience, as well, is taken into her downward spiral. With many jump-cuts, scene switches, and double takes, that is common in Kon’s style, the viewers become just as disoriented as our main character. We, ourselves, are uncertain of what happened, and just when we think we’ve got it figured out, the scene changes again, and says “nope, you have no clue at all”. This is an excellent use of animation, making a fairly realistic look and setting, unrealistic. We are constantly given the feeling that everything is a little off, and that everything we thought was real, isn’t.

Madhouse
Did you know that the scene portrayed here was copied in Darren Aronofsky’s “Requiem for a Dream?”

Most films in the psychological thriller genre, obviously, will look into the psyche of their characters, and a lot of them make us question if what is going on in the film is real or simply all in the character’s head. Perfect Blue is certainly an example of this. But unlike other such films where the ultimate “reveal” is that the character really was or, conversely, really wasn’t crazy, Perfect Blue‘s ultimate conclusion and message is a lot more complicated than that. The problem I tend to have with movies in this genre is that whether what is happening is real or not is all that we are given to look at or contemplate. There’s nothing really beyond that one mystery. Perfect Blue manages to do this, while also tackling themes about how women are portrayed in the media, how women see themselves as a result, and gives us an understanding of and sympathy for Mima’s situation.

This brings us to the second part of the film that I only really started realizing after I had re-watched it a few times. The film has a lot to do with exploring the idea of the male gaze in the media and with Mima’s self identity when going from a pop idol to an actress. In the very first scene which shows Mima singing and dancing on stage with her pop idol group, there is a moment where a man in the crowd is looking at her with his hand cupped around the bottom of his gaze, to simulate the action of literally holding her in the palm of his hand. This key action sets up the idea that a lot of what we see of Mima while in public is through a man’s eyes. It should also be noted that everyone in the crowd in this initial scene are men, and that throughout the film, the background characters that continuously comment on and gossip about Mima are mostly male. Most of the scenes in the movie where Mima is sexualized and objectified is directly through either a camera or a male gaze. As Mima poses for a risqué photo-shoot, we are shown it primarily through the camera lens – through the view of the man holding the camera.

Madhouse
She’s in the palm of his hand…

On the other hand, whenever Mima is by herself, she is often seen through a reflection, or there is a reflection or picture of her somewhere in the scene. It is when Mima looks at herself in the mirror that she sees her old pop idol self. When she looks in the spotlight, she sees her adoring fans from when she sang for them on stage. Mima is torn between trying to gain a new image as a serious actress, despite the push from her fans and her former self to stay “pure”. She begins to literally see a double of herself, dressed in her pop idol outfit, that constantly taunts her about her image change. This battle with self-identity is presented quite well in the rape scene that Mima does for the TV show. It can be seen as a metaphorical raping of her identity as a pop idol, and a “tarnishing” of her “pure” image. As fake-Mima tells her, she can never go back to what she used to be; she is “filthy” now. This can be interpreted as a metaphor of how women are seen and treated after they lose their virginity, or how people react when women are sexually assaulted. This also presents us with how women are viewed in the media, and how they are often held up to more stringent standards, which can be quite damaging. The movie shows us how this can lead to not only one’s reputation, but one’s psyche completely changing in an instant. 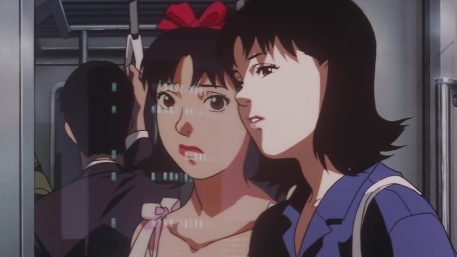 One could go on and on with speculation and varying interpretations with this movie. A lot of the metaphors often smack you in the face, but when mixed with the crazy editing, a lot of the themes can be obscured along with the mystery. That is very much Satoshi Kon’s style of film-making. He will take a fairly basic story with easily interpreted themes, but pair it with a not-so-easy to interpret plot, visuals, and a lot of mind-melting so as to mask the meaning behind the film, and also give the viewer a hell of a ride when viewing his movies. It makes Kon’s style so very unique, and I love his films for it.