Soviet film is not typically known for horror movies. Horrors of a capitalist society, sure, but not really a whole lot of ghosts, werewolves, or any of the other beasties that make for good Halloween viewing. For that very reason, Viy, released in 1967, is a bit of an oddity.  Adapted from a Nikolai Gogol story of the same name, Viy –and its host of witches and demons– evaded government restrictions on movies about the supernatural on the back of its literary and folkloric pedigree. And if Viy is anything to go by (and I propose that it is), then it’s a shame other supernatural terrors didn’t follow it onto Soviet celluloid, because for literally the only Soviet horror movie ever released*, Viy is beautifully crafted and at times genuinely unsettling.

The plot: Khoma (Leonid Kuravlyov), a young seminary student, is asked to hold a three night vigil over the body of the daughter of a wealthy merchant (Natalya Varley), and is told that she had specifically requested him before her death, despite having never met her. To his horror, Khoma finds that the merchant’s daughter is a witch from whom he had earlier escaped. As Khoma attempts to hold his service, the witch’s corpse comes to life and conjures demons and monsters in an attempt to stop him, including the dreaded Viy.

Viy is from my understanding a faithful adaptation of Gogol’s original, which is to say that it takes a while for things to get truly spooky. While this might be bad news for someone hoping for the straight, closed-quarters horror the synopsis suggests are going to find something different. The first 45 minutes are deliberate, giving the audience sense of who Khoma is, what the world he inhabits is like, and Khoma’s first encounter with the witch. The viewer gets a sense of a world without a whole lot of options for peasants, and that is reflected in Khoma, who is witty, clever, but doesn’t seem particularly devout. There are loads of horror movies centered on priests having to overcome their doubts in their faith, but horror movies about priests having to call upon faith that may have never really been there to protect them is still a pretty fresh idea. Kuravlyov gives a performance that is in turns funny, charming, and frail. The way he interacts (and drinks) with the Cossacks that bring him to the village, versus the way he negotiates with the austere and intense merchant over the rites for his daughter inform how he’s going to handle his encounters with demons, and make his breakdown all the more tragic.

It’s during Khoma’s (rather one-sided) spiritual battle with the witch that Viy really shines. Each scene is relatively short, but they feature some remarkable practical effects. These scenes feel like a missing link between the silent horror movies of directors like F.W. Murnau and the boldly colored horrors of Hammer films and Mario Bava. The chapel is filmed more like a stage set than a film one, the camera frequently takes a fixed point and the scene unfold in front of it. Natalya Varley’s performance as the undead witch Pannochka is decidedly stagelike as well, composed of exaggerated facial expressions and gestures that are unnatural and disquieting. The practical effects, including an assortment of claylike demons and hands that lunge out from the walls are horrifying in that way that only old SFX that aren’t quite organic can be. When the title monster is summoned, it’s a scene that goes from eerie to kind of funny and then right back to being eerie.

Perhaps the movies Viy brings to mind most are the Evil Dead movies, and Evil Dead II in particular. I can’t claim to know if Sam Raimi had Viy in mind when making his most-beloved work, but it’s hard not to see the DNA these films share. The use of old-school practical effects, surreal film techniques, and the film’s strange sense of humor are all what we’d now refer to as “Raimi-esque”. Viy uses editing and exaggerated acting to humorous effect, particularly in its early scenes: a shot of a cow chewing cud in a barn quickly cuts to Khoma chewing food in a remarkably similar manner. An early scene of Khoma rejecting the advances of a crone-ified witch wouldn’t feel out of place with Bruce Campbell’s voice in place of Khoma’s. At no point during his vigil does Khoma exclaim “yo, she-bitch, let’s go” (as Gogol would have intended, I’m sure), but it wouldn’t feel terribly out of place if he did. 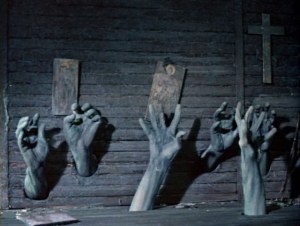 What’s most frustrating about Viy is that it’s the only of its kind. I have my share of gripes with the Soviet Union, but chief among them is that they produced no more horror movies. That the world was denied similar movies taking on Russia’s rich vampire tradition or that OG of fairytale witches the Baba Yaga is a damn shame. Viy is a quirky and inventive anomaly, and it’s one that’s more than worthy of your Octoberween viewing.

*As far as I can tell from my research. Please sound off in the comments if I’m missing some more!