Yeah, I know it’s the middle of May, but guess what. Peter Cushing is always seasonally appropriate. Anyway, it’s been kind of gloomy here lately.

More than that, and more importantly, how is a person expected to go a year between Halloweens? I mean, just what the hell do you expect me to do with myself for eleven months before the next Octoberween begins? In my case, at least, the answer to that question usually involves several B horror movies. Maybe a few more than several. Okay, a lot. Here are two starring the incomparable Peter Cushing. 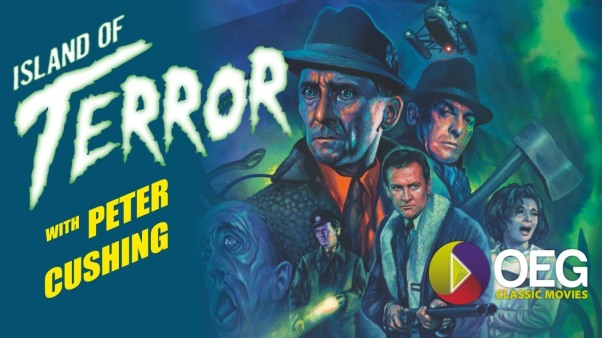 The Plot: While trying to find a cure for cancer bunch of scientists on a remote island off the coast of Ireland accidentally create a race of bone-dissolving tentacle monsters, which are every bit as dreadful as they sound. Perturbed by the sudden appearance of skeleton-free corpses on the island, the local authorities appeal to London pathologists Drs. Stanley (Peter Cushing) and West (Edward Judd) to come and check things out. As the monsters begin to multiply and the mushy bodies start piling up, paranoia and fear mount, and the doctors have to get creative until a convenient solution presents itself… which it of course does, in the nick of time (spoiler).

Yeah, the first half of this movie is the type of low-budget, silly B horror movie that gets endlessly lampooned on The Angry Beavers. The second half of this movie is straight-up Day of the Triffids level uncanny horror. I mean, this stuff gets weird. This is exactly the kind of movie that would have absolutely fucked me up as child. Nah, seriously. Every time I walked out the door I’d worry about running into one of these little critters. They shouldn’t be scary, and… you know, as an adult they’re not, but there’s something very off-putting about them. It’s probably the noises they make. 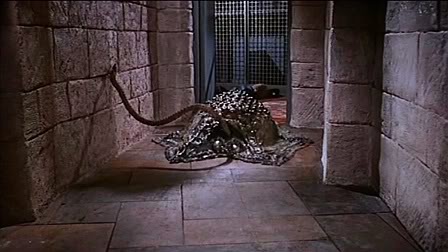 This movie definitely owes a lot to Day of the Triffids. It features unstoppable and weird organic monsters with a single swiping deadly tentacle plaguing a rural community of hearty Brits. Like its 1962 predecessor, the horror is twofold, derived both from the truly uncanny monsters and from the propensity of innocence amongst its victims. At least nobody’s blind in this movie. And Peter Cushing’s in it. And (spoiler alert) he survives without having his bones dissolved in his body, so that’s something.

The Plot: Recently orphaned twins Maria and Frieda (Mary and Madeleine Collinson, respectively) move from the cosmopolitan splendors of Vienna to the remote countryside to live with their uncle Gustav Weil (Peter Cushing), who just so happens to be a puritanical witch hunter, hell-bent on eradicating evil in all its forms. Sure enough, the local count (Damien Thomas) turns out to be a satanic vampire. Typical. Lamenting the tedium of the countryside and suffering the tyranny of her uncle’s zeal, Frieda becomes increasingly enamored with the count and everything his evil has to offer.

Hammer
Actually, only one of the twins is evil.

Most of the movie focuses on the twins and their gradual disagreement over the whole, “Devoting your entire existence to Satan” thing. There’s a good twin and an evil twin, plenty of mistaken identity, close calls, sexy vampire stuff, bloody violence, Gothic architecture, more sexy vampire stuff, more bloody violence, more Gothic architecture, and everything else that made Hammer what it was. What really makes this movie interesting and separates it from others of its ilk is its combination of vampires and witch hunters. Peter Cushing became famous as professional vampire hunter Van Helsing in Terence Fisher’s Horror of Dracula, costarring Christopher Lee in the title role, and he absolutely kicks ass in that movie. He is the greatest. But Twins of Evil, oddly enough, has a more complicated sense of morality.

It was just recently announced that Nicholas Winding Refn plans to produce a remake of the Vincent Price classic The Conqueror Worm (a.k.a. Witchfinder General), which sees Vinny not as a monster or as a hero, but as a dastardly Puritan Witch Hunter. It is his most sinister role and his most violent and genuinely disturbing movie, so Refn totally works for that. Price’s witch hunter is pure evil; Cushing’s is something much more complicated. He plays a character so devout and obsessed with the idea of vanquishing the forces of evil from the face of the earth, that it consumes him and blinds him to reason and compassion. He burns witches, most of whom are innocent, and Cushing manages to give the impression—just in his face and eyes—that somewhere deep down he probably knows they’re innocent, but he keeps telling himself he’s doing the right thing. There’s a fabulous moment late in the movie when he faces the vampire for the first time and realizes that it’s claimed one of his nieces. Nothing in the script indicates that he should do this, but again, it’s in the subtleties of his innately lovable face: he beholds true evil for the first time. In the span of a few moments, his expression changes from abject horror to woe and disgust. His first instinct is to fear the vampire, sure. Then it dawns on him that this is what evil looks and feels like, and he really was wrong about all those innocent people he condemned. The look on his face… damn. Well, I know it’s just a B horror movie, but you don’t get performances like that everywhere you go. 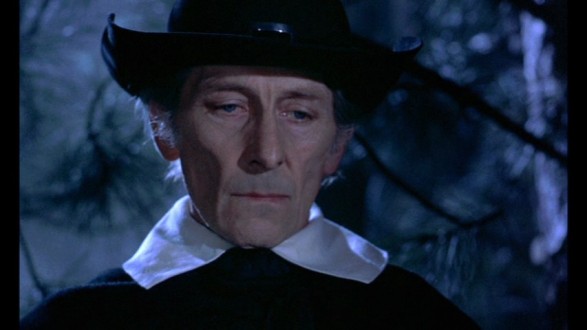 Hammer
Not your typical zealot.

So, Island of Terror isn’t… really… great, but I loved Twins of Evil, especially Cushing’s performance therein.  If you find yourself getting those Octoberween blues in May and just need to get some horror in your life, you check out a Peter Cushing movie. Or a Vincent Price movie. Or a Christopher Lee movie. Boris Karloff, Bela Lugosi, Lon Chaney, etc.… Ah, you know what to do.