And the Octoberween celebration continues. I’ve been pretty busy lately, juggling school and work like so many juggling balls… two, I suppose. Day in and day out it’s just one thing after another and seldom, so seldom, do those things have anything at all to do with Halloween. Every now and then, perhaps, I can pause and bask in the seasonal atmosphere, but I have little time to get well and truly into the spirit of things. I have these weekly articles, at least, to remind me what’s really important in life. For that, I am truly grateful to this cockled, illusory fowl that we make our namesake. Though thy crest be shorn and shaven, thou art sure no craven, ghastly grim and ancient Rooster. As my patrons would say, “Cheers, fella.” An outlet is provided:

I love this month. I get to write about whatever the hell I want as long as it’s moderately spooky.

The Plot: Following a devastatingly failed assassination attempt against the evil vampire Count Dracula (Christopher Lee), seasoned monster-hunter Van Helsing (Peter Cushing) must guard himself, those he loves, and countless innocents against the incurred retaliatory wrathful onslaught of the undead.

Horror of Dracula is the first installment in what became an incredible, time-travelling, bloody, often campy Hammer Horror franchise starring Lee in the title role. I have not yet watched all of those movies, and cannot—and will not—pass any sort of judgment on them. Of Horror of Dracula I will say this, resoundingly and inarguably: what a great movie. A shocker to all those who know me: I think I prefer this to the more canonical Bela Lugosi-starring Dracula of 1931. That movie, while important and atmospheric and beautiful, has some weird pacing issues and a terrible anti-climax. Horror of Dracula diverts even more from Bram Stoker’s novel, but does so in some awesome and, yes, intriguing ways.

Rather than adapting the novel, it seems the filmmakers aimed more to respond to the now well-known cinematic realizations of the story. Most movie adaptations of Dracula had done away with some of the secondary characters and imbued Jonathan Harker (John Van Eyssen here) with the heroic characteristics typical of monster movie protagonists. Anyone who has read Stoker’s book will know that this is not Harker on the page, but more or less what you get if you combined him with that gun-toting Texan that most adaptations remove for some reason. Well, Horror of Dracula goes full-force making Harker a hero. We find out early on that instead of being some innocent realtor, he’s one of Van Helsing’s monster-slaying agents, sent on a mission to dispatch Dracula. And then he gets brutally killed in the first ten minutes. Horror of Dracula immediately does away with its Oxnard Montalvo and instead focuses on a suspenseful game of wits between Peter Cushing and Christopher Lee. Always magnificent, Cushing absolutely steals the show here. His performance is not just good by Hammer standards, but by general cinematic standards, too. I love this man.

Screw it, I’m gonna do another double feature.

The Plot: A couple of unassuming, perfectly respectable British academics (Cushing and Lee) enjoy a perfectly respectable, uneventful journey on the Trans-Siberian Railway. That is, until that ancient MUMMY they brought on board comes to life and starts murdering people. Oh yeah, I guess maybe bringing a mummy onto the train wasn’t a great idea.

I’m sharing something with you, the Internet, and I don’t want you to exploit it. I am trusting you here not to steal my idea. Don’t disappoint me. The greatest film pitch I have ever created (alongside fellow columnist Will Standish of A Bomb in the Lasagna “fame”): Werewolves on a Train. Boom. Done. That’s all the description you need. You’re sold, right? Werewolves. On a Train. Perfect movie.

Well, Horror Express isn’t Werewolves on a Train and, therefore, isn’t perfect, but it’s still pretty damn great. I certainly have a soft spot for mummies, although this monster turns out (spoiler) not to be a mummy, but an evil spirit/alien/actually-the-Devil-himself possessing the mummy. Once they destroy the mummy (retroactive spoiler alert), the true monster hops to another host. Oh no! This leads to a Thing-esque search for the killer when, indeed, the killer could be anyone. This in turn leads to my favorite ever line from one of these old horror movies. At one point the inspector aboard the train, now working with Cushing and Lee, wonders out loud, “One of you could be the monster,” to which Cushing, dead serious and only mildly offended, responds, “Monster? We’re British, you know.” And that is the end of that. They are never called into question again, because you just can’t argue with that kind of logic. 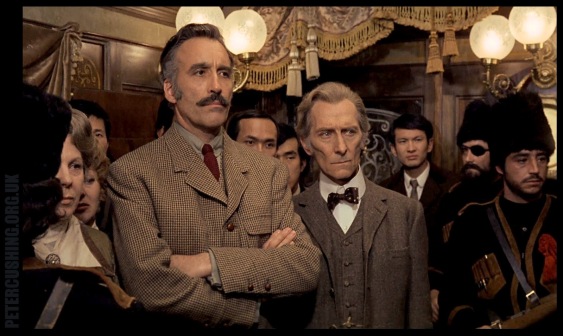 Also, side note: Telly Savalas has a small role as a Cossack.

The fact of the matter remains, if you are desperate for something to watch this Octoberween but just can’t think of anything (and maybe don’t like really scary movies), here’s what you do: print out a giant six-page copy of Peter Cushing’s IMDb page, tape it to a handy wall, and throw darts at it. When you hit a movie title instead of the wall or the framed family portraits, you have your evening planned.

One thought on “Second Breakfast/Octoberween: A Bit of Cushing and Lee”