Well, folks, it would seem, and should come as a surprise to no one, that I, like the rest of the world, have become completely and irreparably enamored with Tom Hardy. Obviously, I loved him in the first movie I saw him in… Inception? Bronson, maybe? Whichever. And since then, my appreciation for his skill has only grown. His performance in Locke blew me away and I recently re-watched The Dark Knight Rises, basking in the perfection of his incredibly physical performance, enjoying how he creates a deep and layered character without the use of his masked face. Yes, Tom Hardy is really one of the best in the biz right now. So, needless to say, I gleamed with excitement when I heard he would bring both Kray twins back to life on the silver screen. 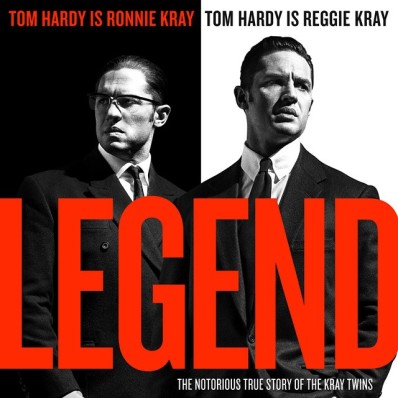 The Plot: Reginald and Ronald Kray (Tom Hardy) rose in power, infamy, and actual fame in 1960s London constructing a high-profile but nigh untouchable criminal empire. When we meet Reggie this makes perfect sense to us. He’s a smooth-talking, dashing, intelligent, charismatic businessman. His unflappable devotion to his mentally-unstable, vicious, violent, and otherwise distasteful twin could easily bring about the downfall to his carefully cultivated success, both in his professional criminal life and in his blossoming personal life with his future wife Frances (Emily Browning).

Legend comes from Brian Helgeland, the Academy Award-winning writer/director behind such films as LA Confidential, Mystic River, and A Knight’s Tale. Now, everybody’s IMDb page has its ups and downs, movie’s we’re proud of and some that we’re not, but given the overall makeup of his, I can honestly say that I expected better. Legend, though competently directed on a shot-by-shot level, suffers from a distracted, inconsistent, and amateurish screenplay. Helgeland can’t seem to decide which of his myriad strands he wishes to focus the most attention on, and so focuses a little on all of them and not enough on any. Much like A Knight’s Tale, actually, Legend dips its toes into every genre it can reach. Unlike A Knight’s Tale, however, it clearly thinks of itself as a serious film and possible awards contender. It is neither of those things. In a single scene it can jump from romance to comedy to crime to thriller to family drama and all the way back again with little to no coherence in its plot.

StudioCanal
Once again, Christopher Eccleston’s expression pretty much says it all.

Like so many biopics, Legend is more concerned with fitting everything that happened without considering the most important, medium-defining truth: cinema is not reality. Even realistic cinema is not reality. Even documentary is not reality. As such, real life does not make for a good movie. Accuracy should always be a primary concern to the biopic filmmaker, but ultimately has to play second fiddle to filmic quality. You have to change some stuff. Every time. That’s just how it is. I am positive that Helgeland changed quite a few things about the Kray’s lives, but not enough, and he changed the wrong things.

Combine all these unfortunately negative elements and you know what you get? If you answered with, “A confused mess with no character motivation,” you are nearly right. I think if left to directorial incompetence, that statement would hold true, but an outstanding cast, expanding to include the likes of David Thewlis, Christopher Eccleston, Tara Fitzgerald, and a needlessly squandered Paul Bettany, did their best to provide some depth. I’m definitely noticing a trend in autumnal releases. Actors are outshining their films. I don’t like this.

StudioCanal
I’m not the only one.

Remember Lawless? Man, I bet you haven’t thought about that movie in a while. We all got very excited for it, then it turned out to be bad, and we all kind of forgot about it. You know what I do remember about Lawless? Tom Hardy was great in that movie. Tom Hardy is great in every movie. Tom Hardy is great in this movie. That’s that. No two ways about it. Time spent watching Tom Hardy is never truly time wasted, but that said, my mind wanders to another viewpoint. If there is never any variation in the quality of his performances, then I should get an equally perfect performance from him in a good movie as in a bad movie. So… why watch the bad movie? I guess I couldn’t have known that Legend would be such a letdown, but I found myself wondering, over the course of the excessive 131-minute runtime, “I should probably be re-watching Fury Road right now.”