Before I start the review, I’m going to take a moment to talk about the massacre in Colorado.  Better, wiser people than I have said better, wiser things than I’m going to say.  But bear with me.

It’s a terrible, terrible thing that happened. I can’t fathom what the victims and their families are going through, and there’s not much I can do to help.  All that these people wanted was to see a movie. And they were murdered for that. Movie theaters should be one of those places where nothing bad ever happens. That’s where you go for things like hope and escape and pure, joyous entertainment. Not horrific acts of senseless violence.

All I can really do is tell you not to avoid the theater.  Don’t let one sick bastard rob you of something you love.  If you were going to see The Dark Knight Rises–or any other movie in theaters–do it.  I, for one, plan on seeing it again in IMAX this week.  And I’m going to enjoy the hell out of it. 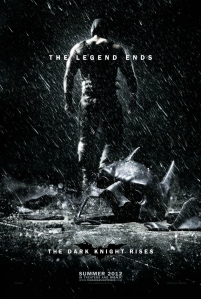 Warner Bros.
Buy it on Amazon!

The Plot: After bringing in the Joker and taking the fall for Harvey Dent’s crimes at the end of The Dark Knight, Bruce Wayne (Christian Bale) retired from being Batman (Bruce Wayne). Eight years later, he’s a bitter recluse who doesn’t see a place for himself in the world. When a mysterious and terrifying mercenary known only as Bane (Tom Hardy) threatens to destroy Gotham and everything that Bruce has worked so hard to build, both the billionaire and the Bat return to Gotham. But has Batman met his match in Bane? Does Bruce even still have the will to act? Also, where does the seductive cat burglar Selina Kyle (Anne Hathaway) fit into all this?

So, you may not know this, but Nolan’s films have all been about Bruce Wayne. A man who uses a mask to give criminals fear and good people hope. That’ll come as a surprise to some of you, who I’m sure just watch these things for the action and the cool gadgets. Which, let’s be honest, are both pretty neat. But those are just the means to an end. Parts of a Myth created by one man to protect the city he loves.

Bruce Wayne. Batman’s lesser half. The façade that the crime-fighting badass has to put up in order to protect his less badass loved ones. We’ve become so enamored with the myth of the Caped Crusader that it’s all we see. Batman is the guy who always wins. The ultimate badass. You just used the word “badass” three times in two sentences.Welcome to the internet, kid. 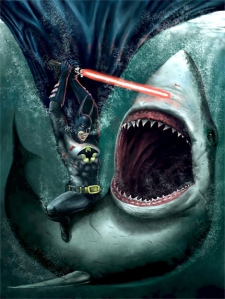 We get so wrapped up in superficial badassery–what are you even saying–that we often forget there’s a man underneath that cowl. Sure, we know the name, but most of us would rather see the Dark Knight than the billionaire playboy. Well, all of us.

But Christopher Nolan’s bat-trilogy is about Bruce Wayne. His character arc takes all three films to fully develop. We see him as a young man in Batman Begins, taking years of anger and using it for something more than revenge. Making a symbol; using fear to create hope.  The Joker’s chaos in The Dark Knight tests that symbol.  And Bruce has to sacrifice the Myth in order to show Gotham that it’s worth saving and give it the hero it needs in Harvey Dent.

Eight years later, Bruce Wayne is a man obsessed with the past. Rachel’s death isn’t the only thing keeping him from the world. Even after giving Gotham hope, Bruce still can’t move on. The hope is fragile, and his anger is still there. A deep self-loathing now. The feeling that if he’s done all he can to help Gotham, then he doesn’t serve a purpose anymore. 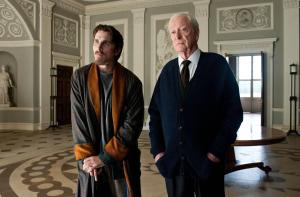 Warner Bros.
He’s too sad to shave. I’ve been that sad before. It sucks.

The Dark Knight Rises is about Bruce redeeming the Myth and completing his journey.  What I loved about the film is that it’s not just a sequel to The Dark Knight.  It’s a true end to the trilogy, incorporating story elements and thematic arcs from Batman Begins. The purpose of these films isn’t just to plot the trajectory of a Myth, from inauspicious beginnings to a place in history. At its heart, Nolan’s Bat-trilogy is about Bruce Wayne struggling to take the anger he’s felt since he was a child and turn it into something positive, something that can save Gotham.

HERE BE SPOILERS, FOR PRETTY MUCH LIKE THE REST OF THE REVIEW 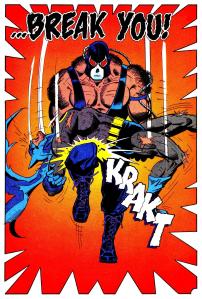 And oh boy, does Gotham ever need saving. Fans of the comics will probably know that this film draws from two major story arcs, Knightfall and No Man’s Land. The former introduces Bane, who releases all of the inmates from Arkham in order to wear down Batman, and eventually goes to the Batcave and breaks the hero’s back.  The latter arc sees the Caped Crusader trying to restore order to a broken Gotham after a massive earthquake hits the city.  The government abandons Gotham, and the city soon dissolves into a massive gang war, with different villains–and the Police, led by Gordon–carving out sections of the city.

The Dark Knight Rises uses elements from both of those stories to great effect. After an eight year retirement, Bruce is no match for Bane. The villain toys with him during their first fight, taunting Batman physically and verbally. Bane, too, was trained by Ra’s Al Ghul (Liam Neeson), but was expelled from the League of Shadows for being too extreme. He has all of Batman’s training, knows all of his tricks, can see his strengths and weaknesses. If there were ever any doubts that Nolan’s Bane would live up to the trilogy’s standard, Tom Hardy dispels them here. His physical presence alone is intimidating, but his theatricality and cunning are what really establish him as a truly memorable villain. 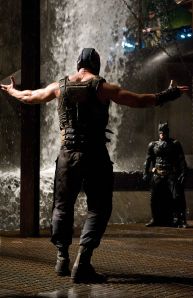 That first fight is an intense, almost harrowing scene. We quickly realize that Batman doesn’t stand a chance. Bane beats him to a pulp, and then…breaks his back. Like, Bane picks up Batman and breaks his back over his knee. That is a thing that happens. And that’s when I realized that Nolan was going all the way with this thing. Sure, the opening airplane heist is impressive, but taking that iconic moment and translating it to the big screen is…epic.

Maybe that’s the best word to describe the film. Not epic in an internet sense, where it just means cool. Epic like The Odyssey or Beowulf. A story told in broad, bold strokes, where men (or women) strive to become more than men (or women) and ideals are at war. Nolan’s ability to convey a lot of information very quickly allows the film to move at a breakneck pace. Even in moments of respite, there’s a feeling of urgency. Aiding this is Hans Zimmer’s score, alternately bombastic and uplifting. The highlights of the soundtrack are a slinky, seductive melody that introduces Selina Kyle and, of course, the “rise” chant used in all of the trailers.

Nolan goes big here, focusing less on gritty realism and more on crafting something wide in scope and ambition. The threat this time isn’t just to the sanity or the soul of Gotham, but to its very life. Bane is out to destroy the city in every way possible. To break its spirit and then raze it to the ground, fulfilling Ra’s Al Ghul’s legacy and avenging his death.

Bane’s plan has a kind of Bond villain level of genius to it. I’m not going to bother summarizing the movie science behind it, because I’m not a movie scientist, but it involves destroying all but one of the bridges leading into Gotham and forcing the American military to prevent citizens from leaving the city. Forcing them, of course, by using a nuclear bomb to hold the city hostage. If one person makes it across the bridge, Gotham will be destroyed. Although the bomb is set to go off in six months anyway. Why give the citizens of Gotham hope if they’re going to die anyway? So that Bruce can see them suffer while he languishes in the hellish prison where Bane grew up.

With Batman out of commission–and as far as anyone in Gotham knows, dead–it’s up to people like Commissioner Gordon (Gary Oldman) to fight back against Bane and his mercenary army. Oldman, as always, gives a solid performance. Jim Gordon is worn out, burdened by the lie he’s had to uphold for eight years–that Harvey Dent, the man who tried to kill Gordon’s child, was a hero, and that Batman was a villain. Joining him is an idealistic young cop, John Blake (Joseph Gordon-Levitt). JGL is extremely likeable, but beneath his handsome charm is the same anger that drives Bruce Wayne. Blake and Gordon play well off each other, a grounded take on the age-old rookie/veteran pairing. 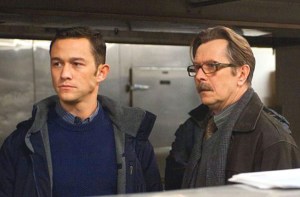 Warner Bros.
And yet Gordon never says that he’s “too old for this shit.”

In fact, the whole cast is pretty damn excellent. Nolan has not one, but two (!) strong, engaging female characters here. Two! Anne Hathaway is fantastic here, crafting a fascinating character. Selina Kyle is engaging and seductive, dangerous and cunning. But also damaged by a hard life, and yearning for something better. Selina is well used in the film, but ultimately it’s Hathaway’s performance that makes the character work. 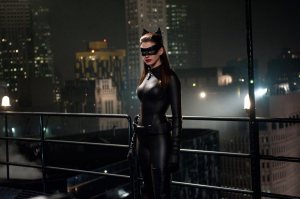 Marion Cotillard’s Miranda Tate is equally alluring, but a match for Bruce’s willpower. Her character, even before an important third act revelation, is defined by her convictions. You don’t have to stop there, we’re in spoiler country. Ah, right. The revelation that she is, in fact, Talia Al Ghul is handled perfectly. It doesn’t feel forced at all. Not so much a twist as an interesting layer to her character. Talia Al Ghul, for the uninitiated, is Ra’s Al Ghul’s daughter. I could go on about her in the comics, but this review is getting long enough. I’ll just say that Nolan’s interpretation treats her as a worthy heir to Ra’s.

The rest of the cast is just as solid. Morgan Freeman and Michael Caine return to their respective roles of Lucius Fox and Alfred, both acting as Bruce’s moral compass. Alfred, especially, plays a significant role in Bruce’s emotional journey. Many of the film’s key emotional scenes focus on the relationship between the butler-turned-father-figure and his stubborn Master Wayne.

And I guess that brings me to the ending. I thought that it was perfect. I’ve read reviews complaining that it’s too happy, and that it feels like “fan service.” I’m gonna have to politely disagree there. The end of the film, with Batman faking his death and retiring with Selina to live a normal life spent making, as a friend said, “ass-kicking babies,” is the emotional payoff that the series deserved. And the one it needed.

Ultimately, that’s what this movie is about—Bruce Wayne learning to be a real person. Because he hasn’t been yet. He’s invested so much time in Batman that he’s driven himself too far inside. And now he gets to rise out of the shadows of the past and into a brighter future. Get it?