In the past few years I have made no secret of the fact that I harbor a deep, undying, unabashed love and reverence for old monster movies, particularly those produced by Universal Studios in the 30s, 40s, and 50s, and anything starring Vincent Price, Christopher Lee, and/or Peter Cushing. As such, I shan’t repeat myself here, explaining, yet again, why I love these movies and these people so much, and urge you instead to just accept the simple fact that I do. Many of the films might warrant the otherwise unfair label of “B” movies; they have low productions values and hastily written scripts, etc. Every so often, though, when browsing the genre installments available for free on YouTube, one might, hypothetically, stumble across a previously unrecognized masterpiece of filmmaking. I wouldn’t call it a common occurrence, but it does happen from time to time. 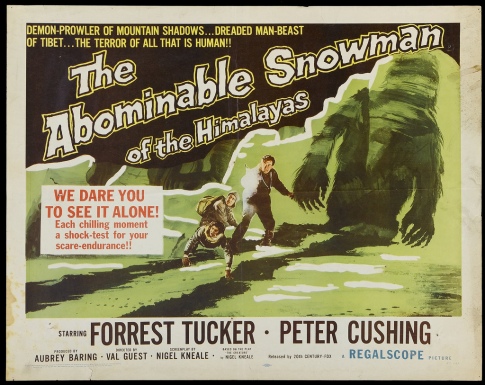 The Plot: English botanist and former mountaineer Doctor Rollason (Peter Cushing), while researching the sparse flora of the Himalayas, joins up with an American expedition in search of the legendary yeti, the titular abominable snowman. Against the advice and warnings of local monks, and the incredibly sensible pleas of his wife (Maureen Connell), Rollason braves the dire conditions of the oppressive Himalayan wilderness, and faces thought-provoking questions about human progress as he and his companions, led by the wannabe cowboy Tom Friend (Forrest Tucker), make questionable contact with their quarry.

Yes, this movies does sport the title The Abominable Snowman. That may or may not strike you as a rather bold move, since surely no one could ever take such a film seriously. The title really says one thing: “I am a B movie starring either Vincent Price or Peter Cushing.” Inaccurate, sorry; it says two things; the second: “They spent ninety-five minutes and a bottle of bourbon writing me.” Thus, I begin my suit against The Abominable Snowman for reckless and inconsiderate false advertising. Imagine my surprise when I press the play button and meet not a stupid-but-entertaining horror movie, but instead a perfectly clever, thought-provoking, well realized drama with themes comparable to The Creature from the Black Lagoon and Jurassic Park. Like those films, King Kong, and so many others, our heroes journey to a stunning, awe-inspiring, but uninhabited wilderness, expecting to find wonder and glory, but instead descending into an Aguirre– or Heart of Darkness-like spiral exposing human frailty, the futility of heroism in the face of an uncaring nature, and how far human progress will actually succeed against the unrelenting tides of time. Seriously. I watched a 1957, black and white monster movie starring Peter Cushing and titled—no fooling—The Abominable Snowman, about a group of adventurers hunting a yeti, and was floored by how expertly made it was. As previously insinuated, I have watched a lot of these movies before, but this is easily one of the best, ranking amongst the more widely recognized canonical horror icons like Frankenstein and The Phantom of the Opera. 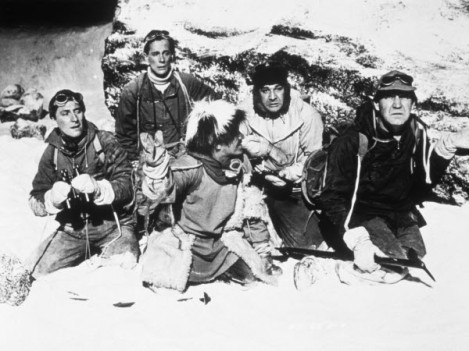 Hammer Horror
Be careful, fellas, it’s out there somewhere.

Movies like this always come as a treat to watch, but also kind of worry me. If I found this by accident while craving a stupid monster movie, what other hidden masterpieces lurk out there that I will never watch? I think that’s what I liked so much about Only Lovers Left Alive; Jim Jarmusch’s vision of immortality is merely a means to never have to miss an irreplaceable piece of art. It’s worth noting that his immortal bohemians never watched a Peter Cushing movie (on screen, at least), but really, that’s their loss.

I’ve devoted a lot of my attention recently to Peter Cushing. Where Vincent Price and Christopher Lee perfectly played the weird, the frightening, the mad, the charismatic, Cushing makes the perfect straight man. His gentle voice and pleasing accent always make him instantly relatable (I have seen this twisted to divert attention in films where he turns out to be the killer or, you know, Star Wars). The Abominable Snowman features, thanks to Cushing’s efforts, a rare incarnation on a familiar archetype: the Movie Scientist. One thing and one thing alone drives Movie Science: the pursuit of knowledge at all costs. Dr. Jekyll and Mr. Hyde, Frankenstein, The Thing from Outer Space, Jurassic Park, Prometheus, Ex Machina and just so many other movies spanning the decades feature this theme to some degree, because mad scientists are fun to write and easy to punish. I think this might be the only time where the scientist, driven by the pursuit of knowledge with little thought given to the consequences, is the most likable and understandable character in the film. 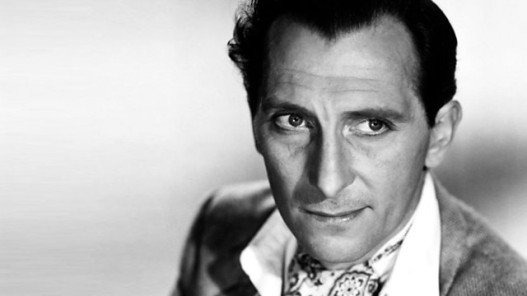 BBC
Plus, he didn’t even look gaunt and terrifying in the ’50s.