Verdict: Quite a bit better than Predator 2

The Plot: You know the plot, right? The hideous, ghostly Phantom (Lon Chaney) haunts a Parisian opera house and seeks love with a beautiful singer named Christine (Mary Philbin). Ugly shut-away woos attractive woman. Does it sound similar to Disney’s bizarre adaptation of The Hunchback of Notre Dame? Because it shouldn’t. By “seeks love,” I really just meant kidnapping, coercion, threats, attempted murder, actual murder, etc. Is this not what your wooing process is like? Hm. Either you or the Phantom is doing it wrong.

Sarcastic critic tone aside, this movie is great. A landmark of silent horror, The Phantom of the Opera stands equal alongside predecessors like The Cabinet of Dr. Caligari (1920)and Nosferatu (1922), and helps set the stage for successors including Metropolis (1927), Frankenstein (1931), and really all those other Universal Studios monster movies. What makes this film great is how nicely all its technical elements blend with its story to create a balance of terror and passion. In fact, the film is built upon these contrasts. Phantom’s locale is inspired by the seemingly contradictory styles of Hollywood and German Expressionism. Director Rupert Julian clearly worked closely with art directors Charles D. Hall and Elmer Sheeley to create the spectacular opera house sets, which echo the opulent grandeur of Cecil B. DeMille and D.W. Griffith. Meanwhile, though, beneath the opera house is the Phantom’s lair, an endless maze of catacombs, trapdoors, underground lakes, secret passageways, dungeons, and medieval torture chambers, all decked out with horrible traps controlled by the Phantom’s thundering pipe organ. This underground realm recalls F.W. Murnau’s stylistic, but grounded expressionism from Nosferatu. This division represents a fresh new Paris, trying to literally build over the mistakes of the past, raising opera houses on the ruins of prisons and dungeons. Here we have the elite trying to suppress the memories of old sin.

These decorative differences play out in the themes of the film as well, though. This is a film about the divisions between beauty and horror, rich and poor, art and violence, love and greed, present and past, truth and disguise. That last one, in particular, is very important. Ruper Julian plays these themes out with a number of excellent literary references, including Faust, Poe’s “The Masque of the Red Death,” and Don Juan. While all are important, Don Juan is perhaps the most interesting as it appears ironically in the form of a song that the Phantom composes for himself, “Don Juan Triumphant.” The Phantom tries to find comfort in painting himself as a Romantic, Byronic character capable of love. 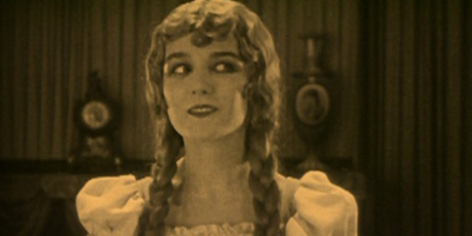 Universal Pictures
I get your references, Phantom. I see what you’re doing there.

This effort is also apparent in a few speeches, presented in inter-titles, because this is a silent film, in which the Phantom tries to make Christine understand him, his world, and his motivations. Erik, as we discover is his name, is a misunderstood soul, driven to villainy, tormented by a society that has branded him a monster. Other adaptations take this a step further in allowing Christine to love him a little (see Broadway), but I prefer this version wherein she does not have feelings for him, not even pity. The message is and his motivations are clearer if we see that even the woman he loves is afraid of him. This is really where we see The Phantom of the Opera’s legacy in later films. I mentioned earlier the subgenre of Universal Studios monster movies. Most of these, except any Dracula adaptation, are built upon the ideal of a sympathetic monster. Frankenstein, The Mummy (1932), King Kong (1933, The Wolf Man (1941), Creature from the Black Lagoon (1954), in all of these films, you feel sorry for the monster. I might be wrong about this, but I think that no one really did that before The Phantom of the Opera. I don’t know about you guys, but I didn’t feel bad for Count Orlok or Dr. Caligari. It is important to understand our enemies and our abominations. This is something that the horror genre has pretty much lost sight of since the sixties. Norman Bates? Not really. Michael Meyers? Definitely not. Alien? Why did I even bother asking? I have just named a few excellent adversaries, but terrible characters. The monsters of the good ole days weren’t just monsters; they were characters.

If you love horror movies and want to see a quintessential example of fright done right, and if you can sit through a 90 minute silent film, check out The Phantom of the Opera.

For those of you who really care, yes, I know that King Kong is not a Universal movie. It’s RKO. Rooster Illusion retains its professionalism.

P.S. Lon Chaney did all his own makeup for this movie, which is awesome.

3 thoughts on “Second Breakfast Gets in the Spirit of Things”