HOLY CRAP IT IS ALMOST HALLOWEEN I HOPE YOU HAVE YOUR COSTUMES READY.

What am I going as, you ask? Not sure. It’s a toss-up between Skinny Indiana Jones (Skindiana Jones?) and Video Store Clerk Who Didn’t Make a Costume.

But enough of my wicked awesome Halloween plans. Let’s get on to the important stuff, like how Francis Ford Coppola wrote his midterm paper on eroticism in Dracula, and how I really hope this was his first draft.

The Plot: Jonathan Harker (Keanu Reeves, for some reason), a chaste, boring law clerk, leaves his chaste, boring fiancé Mina (Winona Ryder, for some reason) in London to go do some law clerk stuff in Transylvania. Staying at a castle owned by a wicked old, super creepy (Gary Oldman, for good reason) Count Dracula, John soon discovers that things are not what they seem, in that Dracula is a vampire and there are some naked vampire chicks who want to sleep with him, even though his English accent is terrible. Meanwhile, Mina watches with envy as her “free-spirited” friend Lucy (Sadie Frost) romances three men and talks about sex a lot. Then Dracula shows up in London, gives Lucy twenty minutes of orgasms, and turns her into a vampire. Fortunately, one of Lucy’s men is a doctor, and he was mentored by the famous Abraham Van Helsing (Anthony Hopkins), who knows his shit about vampires. Meanwhile (but after the previous meanwhile, obviously) Dracula seduces Mina, because he is young and Johnny Depp-lookin’ now, and she is apparently his dead wife reincarnated, which is stupid. Meanwhile again, Jonathan escapes the castle. But will he be able to save Mina? Will Van Helsing choke on all the scenery he’s chewing? Will anyone ever settle on an accent? Only time or a vague knowledge of pop culture will tell.

Clearly, this is a film that will prompt some strong reactions from the viewer. Realizing this about two minutes in, I decided to take some notes, which I’m not normally in the habit of doing. Here are a few observations I made:

“Tom Waits? Yerp.” Note: Tom Waits is in this. His performance is okay.

“Everything is so meaningful and sexual!”

“That’s a pretty bitchin’ castle, though.” 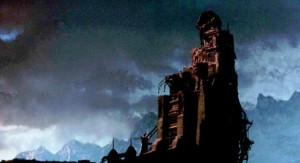 Columbia Pictures
It really is.

To be fair, Coppola didn’t write this. James V. Hart did. Though Mr. Hart would later go on to write the brilliant Muppet Treasure Island, he is to blame for things like underdeveloped characters and a story that seems to be largely made of climaxes. He’s also responsible for the abundance of sexual metaphors, or, as the film would say, SEXUAL METAPHORS!!1!!!

Sexual metaphor, in this case, is just a nice way of saying that there’s like twenty minutes of orgasms. If you’re over fourteen, then that’s as stupid as it sounds. The whole concept of Dracula representing unbridled passion and repressed desires is offered in such a heavy-handed fashion that he actually turns into a Sex Wolf at one point and…uh…seduces? Rapes? Pulls a Zeus? Whatever it is, he does it to Lucy, the “free-spirited” girl who’s more likely to give in to her primal desires. He’ll save the absinthe and romance for the virgin, thank you very much. Sounds almost okay on paper, doesn’t it, Junior Film Theorists? Okay, yeah, metaphors and stuff.

Sorry, I couldn’t find an actual still from the movie on Google, which is surprising. But after you’ve spent a couple minutes searching for “Dracula Sex Wolf Lucy” images, you start to feel a little dirty. Rest assured, though. That little statue thing is totally accurate, which makes me think that some poor artist needs to get some air.

All of this obsession with creating the perfect erotic mood and sexual metaphor shortchanges things like character depth and character motivations and character consistency and plot. Keanu Reeves gives an admittedly wooden performance, but Jonathan Harker is written so blandly I’m amazed they didn’t just put a beige carpet swatch in a wig and call it a day. Actually, the carpet might have done a better accent. Jonathan exists as a foil to Dracula, the stuffy English clerk who’s only ever kissed his fiancé. Very Victorian, but you’d think that the character might react a little more—or at all—to being imprisoned in Transylvania, or to discovering that EVERYONE IN THE CASTLE IS VAMPIRES. Seriously. 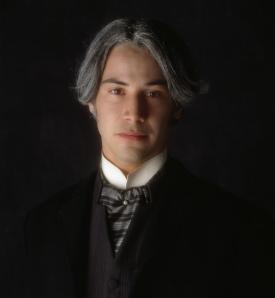 The other characters, for the most part, fall into the same pattern of being driven by the plot and having truly baffling accents. It’s a relief when Cary Elwes shows up to do his generic English Cad voice, because Keanu and Winona have apparently never heard an English accent before.

The only really noteworthy performances come, unsurprisingly, from Gary Oldman and Anthony Hopkins. Oldman’s Dracula alternates between menacing and seductive, but he makes it feel like those are real character traits and not just emotions required by a shaky plot. He’s especially unsettling in early scenes in the castle, convincing us that beneath the ridiculous hair lies an enormous ego and a cruel spirit. 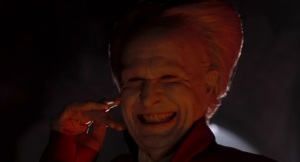 Columbia Pictures
Hey, I’m Gary Oldman, and I’m playing an Old Man! I just got that!

Later, when he’s all Depp-ified, Oldman actually kind of sells the stupid idea that Dracula has just kind of been hanging out for hundreds of years hoping to find a woman who looks exactly like his dead wife. Well, he makes the character’s emotions seem real. It’s not his fault that the concept is a dumb gimmick to make his character more “relatable.”

Anthony Hopkins’ bombastic performance is fun, but the character lacks the nuance of even Diego de la Vega in The Mask of Zorro, which I think we can all agree takes itself a lot less seriously than Bram Stoker’s Dracula. He’s over-the-top and kind of crazy, and it works for the character. It’s a shame that Van Helsing is the only part of the movie that doesn’t take itself way too goddamn seriously.

I realize that some of you would probably like this movie a lot more than I did. Some of you already do. That’s fine. I don’t think that my own opinion is law. I’m not trying to give a fair and balanced review here. I’m just telling you guys what I think of stuff. It’s up to you to decide if you agree or not.