Well, it’s been a fortnight since I wrote here last, but after some travels and long holiday retail hours, I’m back, I’m full of holiday cheer, and I’m ready to spread it through the world via film reviews.

So with that, let’s look at a harrowing drama that ends with a murder. 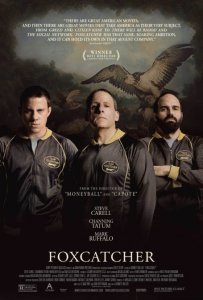 The plot: Two years after winning the gold medal during the 1984 Olympics, wrestler Mark Schultz (Channing Tatum) is living alone in a shoddy apartment as he trains for the 1988 games. Forever living in the shadow of his more successful older brother Dave (Mark Ruffalo), Mark’s luck seems to turn around when he receives a call from John du Pont (Steve Carrell), scion of the du Pont chemical fortune, offering him an astounding amount of money to live and train at du Pont’s state-of-the-art wrestling facility in his Pennsylvania estate, Foxcatcher. Despite no prior wrestling experience, du Pont is eager to help instill a sense of heroism and patriotism in America by helping to bring home a gold medal in wrestling, a plan in which the angry and adrift Mark is key. Though awkward and eccentric, du Pont offers Mark a sense of purpose and a surrogate mentor as he trains, but soon things begin to take a turn for the worse as du Pont becomes more manipulative and their relationship gets stranger. Mark’s performance is jeopardized when du Pont brings Dave in as a coach and Mark’s role at Foxcatcher is suddenly minimized. As the games draw nearer, the relationship between the three men grows more and more strained, ending in fatal results.

As is probably clear from the above synopsis, Foxcatcher is deeply concerned with the psychology of its lead actors and the way they interact with each other. Despite its sordid, “based on a true story” subject matter, Foxcatcher is, above all else, an intense character study. I tend not to like docudramas terribly much, as I feel they tend to want to focus much more on the sensational details of an incident rather than the actual people involved, and luckily, the almost entirely the case in this film. Director Bennett Miller, whose previous directing credits include Capote and Moneyball, is certainly no stranger to intense character study; and as previously displayed with Jonah Hill in Moneyball, certainly knows how to get excellent performances out of unlikely actors.

This type of film is new territory for both Steve Carrell and Channing Tatum, and both rise to the challenge with aplomb. With legacy and family as its central themes, Carrell and Tatum are cast as foils; both are the overlooked members of famous families attempting to find their own way in the shadow older relatives, and as such they both drift towards each other. Carrell, acting with silvered hair and a prosthetic nose, disappears into the role of the uncomfortable, unsettling du Pont, even his voice obscured by deliberate, occasionally stuttered dialogue. The challenge of this kind of film is striking the delicate balance between making du Pont appropriately creepy and keeping him human, and aside from some straying further into creep territory in the third act, Carrell does an admirable job of making someone cold, unnerving, and ultimately a killer sympathetic. 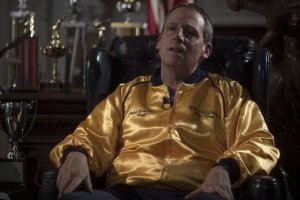 Tatum, who has gone on record as saying this was his most difficult role, is pretty impressive. A lot of Tatum’s acting comes from his physicality and how he holds himself in this film. Frequently hunched, Mark looks physically uncomfortable in his surroundings away from the wrestling mat, particularly in his cramped apartment in the beginning of the film. As he grows closer to du Pont, he becomes more confident and physically looks the part, only to become almost feral and scary as du Pont begins to exile him. The role taxes Tatum, and while it’s not the standout performance of the film, it demonstrates this dude is capable of heavier roles than many (especially this critic) gave him credit for.

The most interesting interactions aren’t between Mark and du Pont, but between Mark and older brother Dave. Ruffalo is excellent in this film, a figure of warmth and stability that Mark is unable to fully accept. Dave wants to help his troubled brother and tries to guide him, even if he realizes that this may ultimately push his independence-seeking brother away. His voice never rising above an indoor speaking register, Ruffalo’s is the kind of quiet performance that regretfully gets overlooked come Oscar nomination time in favor of more bombastic performances. The complexity of the Schultzs’ relationship is captured beautifully in which the two wrestlers spar. A practice between the two in the first act shows the viewer everything they need to know about these brothers where they stand with each other, as an angry Mark lands a hit on a shocked, but calm Dave who easily pins him afterward. If noting else in this film held up, that scene would still be a shining example of excellent filmmaking. 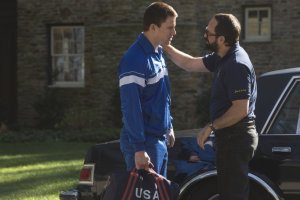 Unfortunately, some elements of the film don’t hold up as well. The film focuses so intently on the central relationships, that when it looks elsewhere, a lot of the tension—and interest—is released. As the Olympics draw nearer, the film focuses more on a despondent and overweight Mark trying to get back into shape to make his weight class. It provides some interesting visuals, but strays from what made the film compelling earlier. It’s worth noting that by this point in the film, Dave has become the protagonist and the film becomes his perspective. This is a gambit that I assume is meant to highlight the off-putting absence of a now near-silent Mark, but it’s more confusing than it’s worth. Mark is the character through whom we’ve seen du Pont for most of the film, so changing things to Dave’s perspective muddles some of the character work they built for du Pont earlier on, making the murder he commits shocking, but a little less human (to the degree you can humanize murder, I guess).

A final nitpick is the confusing chronology of the film that compresses a few years into a much shorter span, making some of the arcs the characters take seem surprisingly brisk.

Foxcatcher is best when it keeps its plot small in scale but rich in character work and aside from some diversions into forgettable sports drama, is an intense, unsettling watch.