Production studios are weird, and I gather involve a good deal of politics. Film festivals are also weird, and also heavily political. Things like the Cannes Film Festival are nice for indie filmmakers (the high-profile and non-indie indie filmmakers like the Coens and Wes Anderson) to screen their films and get picked up by major production studios for distribution. What happens after someone like, for example, Harvey Weinstein buys the distribution right? It hits theaters in the US and becomes the critical darling that it already is in Europe. Or nothing happens at all for over a year and a half. Fortunately, our travels and studies do occasionally take us across the Atlantic, and we get to see things long before their arrival here. 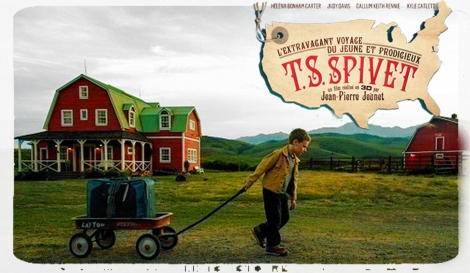 The Plot: Child-genius T.S. Spivet (Kyle Catlett) wins a prestigious award for scientific invention from the Smithsonian Institute in Washington D.C. The problem is that he hasn’t said a word of this to his emotionally distant parents (Helena Bonham Carter and Callum Keith Rennie), and fears that his achievement will be denied of him should the Smithsonian discover his true age. So, hoping the element of surprise will serve him well, he embarks upon a solo journey from his Montana ranch home to the bright cityscape of the nation’s capital. Before long, though, we realize that this isn’t a simple story of a precocious child travelling cross-country to achieve glory. T.S. leaves behind his home in an attempt to escape the overwhelming guilt and sadness he feels at the recent accidental death of his twin brother (Jakob Davies).

The most incredible feat of T.S. Spivet is that it’s remarkably not irritating at all. T.S. could so easily grate on the nerves, as most child prodigies do. It’s an insufferable character type. Catlett delivers an admirable and genuine performance, however, and his intellectual brilliance feels innate, and never too cutesy or hokey. In fact, what really works is that every character is well-defined, realistic, and accessible. Even T.S.’s stoic and silent cowboy father and his spacey-but-thoughtful scientist mother appeal to some deeper understanding of humanity despite their emotional distance. Although the sorrow of the death hits them all differently (including the overly-dramatic teenage sister (Niamh Wilson)), they all deal with it in believable ways. The emotional backbone of this film will be familiar to anyone who has ever lost a loved one, or ever witnessed someone else endure that loss.

Of course, a great understanding of human emotion should come as an expected trait of any project by writer/director Jean-Pierre Jeunet, who brought us such wonderful films as Delicatessen, The City of Lost Children, Amélie, and A Very Long Engagement, and also the not-so-great Alien: Resurrection. Forget that last one, though. I shouldn’t have mentioned it. I wrote a paper in college once about the most prevalent recurring theme in Jeunet’s work: the conversation between fate and coincidence. The conclusion at which I arrived was that Jeunet himself seems to like both, but favor neither. Either way, whatever happens is ultimately beyond the limits of control. What makes humans extraordinary is not their ability to command and manipulate circumstances, but the way they choose to react to the twists and turns of life. Spivet fits cozily into that oeuvre, examining how a ten year old boy could possibly overcome the death of his beloved twin brother. I’ll not tell you what the resolution is, but I will say that it’s lovely.

The only negative reviews I’ve read of this film have complained that it’s all flash and style, and lacks heart or any type of point. I guess that reading is understandable if coming from someone who never had a childhood and never loved anyone or anything. Yeah, that’s the only explanation I can think of for that review. Spivet does have a great sense of style. Jeunet often breaks into his signature magic realism by superimposing T.S.’s thought process and world vision onto the screen. Ultimately, these instances are all character driven, and offer the audience a clearer understanding of the main protagonist’s psyche. I guess you could get distracted from the point of the film if your gaze is too preoccupied with the absolutely stunning cinematography and your ears can’t hear anything except the perfect soundtrack. Otherwise, what’s not to like? Dominique Pinon plays a crazy hobo, for Pete’s sake.

I don’t know why this film hasn’t been released in the United States yet, or why it doesn’t even have a release date lined up. I’m sure people would like it. Everyone I know who’s seen it has liked it. Whatever. Hollywood’s weird. Spivet is on DVD in the UK now, so if you have a region 2 player at home, I would highly recommend a quick visit to Amazon UK to check it out. Certainly any fans for Jeunet’s previous work should bask in the glory of his American journey. He makes this country look beautiful, and at a time where you never hear anything positive about it anymore, it’s nice to be reminded that there’s some good out there. I would also recommend this movie to anyone struggling with a death. Though incredibly heart-wrenching and tear-jerking at times, The Young and Prodigious T.S. Spivet is an ultimately uplifting and reassuring story about coping. Sorry to tease American readers who can’t see it easily. Hey, that kind of thing is out of our hands. All you have to do is decide how to play the hand you’ve been dealt. Let the record show, however, that I do not condone piracy.