Winter is a double whammy in the film industry: blockbusters and prestige films. That’s enough to totally clog up well-meaning amateur film blogs like the one you’re reading right now. It’s also enough to burn out the avid movie goer and plant a dangerous little seed of “Geez, I could use a small movie. What’s floating around the indie circuit?” Now, independent cinema can be a truly great thing, but it has equal if not greater potential to be a brutal waste of time. It’s important to be reminded every now and then of why we need Hollywood. 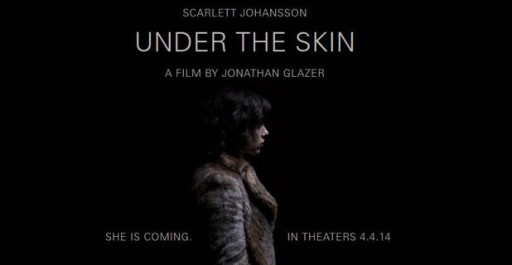 The Plot: A nameless sexy alien (Scarlett Johansson) wanders around Scotland seducing men and feeding them to a mysterious pool of black stuff.

It’s been a while since I managed a one-sentence synopsis. In this case, though, I’m not consciously opting for brevity, there’s just nothing more to say in terms of plot. “Writer”/director Jonathan Glazer committed the obvious sin that seems to tempt all first-timers making an indie movie: he assumes that sequences of stylized, hyper-artsy shots and offensively gratuitous nudity will substitute for character, plot, and point. This approach to filmmaking may or may not strike you as entirely ill-advised and just downright incorrect; if it doesn’t, you need to reevaluate your life. I will concede, of course, that art cinema has its place, and I can certainly appreciate it from time to time, but Under the Skin is not art cinema, it’s just garbage. Jonathan Glazer is also not a first-timer making some egregious error because he doesn’t know any better, he’s the experienced and critically-lauded maker of Sexy Beast. He has no excuse.

And yet, despite that, much more legitimate critics than I have given this film rave reviews. Now, perhaps it would be wrong of me to say that some opinions are more valid than others. In fact, I’m hiding behind the idea that all opinions are equally valuable, because otherwise why would anyone read my articles? That said, I truly believe that anyone who liked this movie simply fell for the trick that Glazer told his actors, “This is art, you guys. If you fail to understand and like this movie, you just don’t get art, Nick.” It’s sort of the classic Freudian argument, “If you claim your entire life isn’t motivated by sex, it’s because you’re repressing your deepest desires (e.g. if you claim I’m wrong it just proves my point even more).” You gotta love people like that. 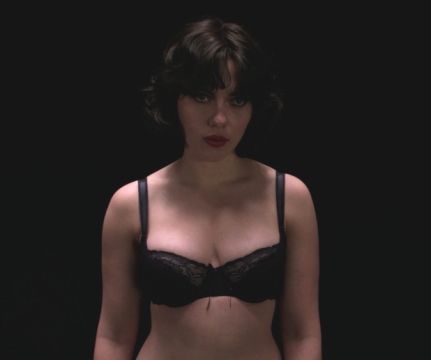 Film4
This is art, you guys.

Or hate them. So, Scarlett Johansson stars in this movie. If you’re somehow unfamiliar with the name, this is the same Scarlett Johansson who has starred in three recent Avengers franchise films and has another coming out next year. In addition to that, she’s also starred in such critically beloved films as Sofia Coppola’s Lost in Translation, Woody Allen’s Vicky Cristina Barcelona, Christopher Nolan’s The Prestige, and Spike Jonze’s Her. She’s known rare success in both mainstream blockbusters and Oscar movies. This leaves us with a mystery on our hands. Why would she pick a plotless, pointless, pretentious indie movie when she could probably be in any movie she wanted, and her C.V. includes references from some of the most powerful and well-respected people in Hollywood? The obvious answer to me is that she wanted to be taken seriously as an artist, so she figured on doing an artsy movie.

Enter Jonathan Glazer, the artist with a vision, a vision to exploit star power as shamelessly as humanly possible. At some point, he must have realized that his movie lacked substance altogether, and had to confront the fact that no one would ever want to watch it, because people tend to like movies they think are good. On top of that, star power is an undeniable force. Audiences will flock to movies because of a particular actor or actress. I myself am occasionally guilty of this, as I’m sure my close personal friend Michael Fassbender would vouch, if only he’d return my calls. Regardless of the how or why, Glazer got Johansson, proceeded to con her into thinking that she was contributing to great art, and then exploited her name, face, and body in any and every way possible, recognizing that no one would watch his movie otherwise. 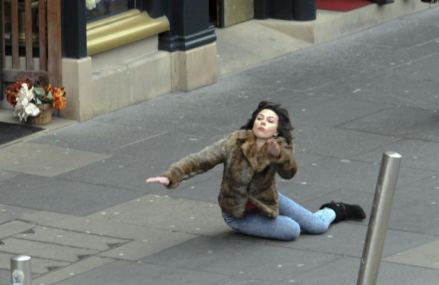 Film4
Although she does fall down at one point, and falling down is pretty funny.

I don’t want to turn this into a big rant about nudity. A couple months ago I wrote an article about violence in film. I talked about how to do it well, and how to do it badly. Essentially, my argument boiled down to the idea that if violence is deliberately placed to serve the overall theme of the movie, either for the sake of realism or art, or if it is absolutely essential for plot and character development, then it’s okay. If it’s only there for its own sake, then we have a problem. I can say the exact same thing about nudity, except I think the ratio between necessary and unnecessary is even more unbalanced. If it’s there because somebody thinks it looks neat or just to ramp up sex appeal, then it doesn’t need to be there. It certainly does not make up for a lack of character or plot or, you know, any sort of point whatsoever.

Under the Skin frustrated me. You probably got that by now. And yet, I watched the whole thing… that was a waste of time.