Family is important. Duh. I’m looking forward to spending this coming week hanging out with my brother (so expect a hastily-written filler article next week; you have been warned), and it seemed only fitting that to welcome him on his temporary stay I should review a movie that he recommended, and that supports strong, undying family values. Values like violence and vengeance.

The Plot: When the man who supposedly murdered his parents is finally released from prison, dirty vagrant Dwight (Macon Blair) returns to his hometown to exact his long overdue revenge, the consequences for which are far beyond his reckoning. Everybody has family, and nobody takes kindly to being wronged. Even more important for him to learn: violence breeds violence.

Blue Ruin is a rare and refreshing film, fitting snuggly amongst the otherwise bland droves of unassuming, forgettable, quiet indie films with lessons everybody already knew to begin with. I tend not to like indie movies with no screenplays that were made simply as an excuse for directorial indulgence, but that’s not Blue Ruin. The amount of dialogue in the film, though little, perfectly suits the characters and circumstances. I never feel as though too much is said or left unsaid. It’s a quiet movie about sad people searching for resolution and finding only more sadness, a kind of film I’ve seen dozens of times before, a kind of film I would normally term “forgettable” or even “regrettable,” but with the same care it gives to its story and its people, Blue Ruin softly avoids the pitfalls of its peers. No, perhaps avoidance isn’t right. It implies intentionality and deliberation. More accurately, I think writer/director Jeremy Saulnier simply followed the natural course of the art, but that art was good to begin with, and would have had to be ruined on purpose if it were to fail. 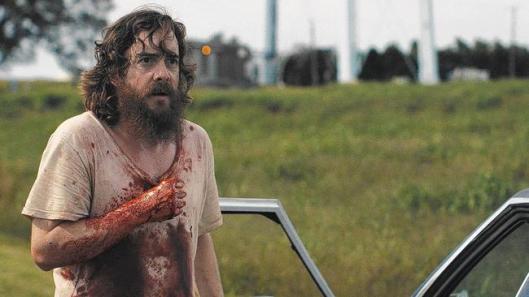 Of course, to steer clear of the narrative disaster that ensnares many an indie filmmaker is one thing, but Saulnier also avoids the tropes of the revenge drama. Yes: revenge is never the best option and violence always breeds more violence; every revenge tragedy worth its salt from Shakespeare and Middleton up to Chan-wook Park and Nicholas Winding Refn posits as much. There might not be anything new to say, but there are always, endlessly new ways to say it.

Much of the originality of the film is due to the efforts of unconventional leading man Macon Blair. Take a look at this guy and tell me he doesn’t remind you just a little bit of Detective Boyle from Brooklyn Nine-Nine (obviously don’t heed that dare if you’ve never watched the show). This is not a violent man, not a bad-ass, not even someone you could potentially train into a bad-ass. Dwight is as normal a man as they come, undone by family tragedy and compelled by a force he doesn’t quite understand and can’t control, an innate impulse to stand by those who share his blood, even if they aren’t around anymore. 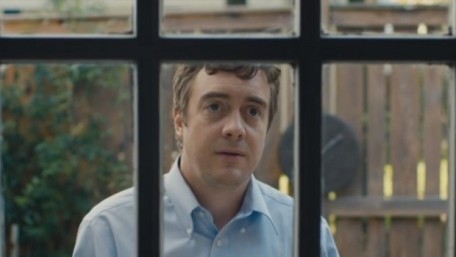 There are only a few minor cutaway scenes where Dwight is absent. For the rest of the film, the viewer stays beside him, watching him as he struggles to stay alive and to rob others of life. Despite this primeval conflict, Dwight’s an immediately likable character. He has our pity and our vote, although Saulnier makes it difficult to get fully behind anything he does. The violence in the film lacks any glory, style, art, or choreography, making it fast, brutal, frank, and indiscriminate. I’ve written about violence before, and it’s something I generally pay a lot of attention to in movies, so I can say with some confidence that Saulnier’s chosen depiction of it is (sorry for the repetitive adjective use) as rare and refreshing as the movie itself.

With its extraordinary combination of elegant direction, understated performance, an appropriately sparse screenplay, beautiful cinematography, disturbing violence, and moving tragedy, Blue Ruin easily and deservedly takes its place as one of the best revenge stories of recent years. It can, admittedly, be difficult to convince yourself to watch a movie that you know will be unpleasant or upsetting in some capacity. I myself commonly end up postponing those viewings indefinitely, as I did with Blue Ruin and Calvary and several others that I’ve only recently gotten around to watching. Take it from me that in this case, you should just take the plunge. It’s an immediately enticing, immediately rewarding watch.

One thought on “Second Breakfast: ‘Blue Ruin’ and the Wonderful World of Violent Revenge”