The Plot: Vincent McKenna (Bill Murray) is a heavy drinking, foul-mouthed, chain-smoking, hooker-hirin’ gambler. In other words, the kind of guy who’s probably pretty low on your list of potential babysitters for your meek, precocious 12 year old boy. Despite all of these charming qualities, fate and long work hours make Vincent the afterschool caretaker and de facto role model for his new neighbor Oliver (Jaeden Liebehrer) while his recently divorced mother Maggie (Melissa McCarthy) puts in hours at the hospital. At first, Vincent sees his $12/hr babysitting gig as nothing more than a means to pay off his debts to the bank, his bookie Zucko (Terrence Howard), and pregnant Russian prostitute Daka (Naomi Watts); but soon, Vincent and Oliver form a fast, montage-aided friendship. Under Vincent’s influence, Oliver finds newfound confidence to stand up to his school bullies, but begins to drift away from his concerned mother. Complications arise as Oliver’s father tries to gain custody of his son and both Zucko and the rising price of the assisted living facility where Vincent’s Alzheimer’s stricken wife resides press Vincent for money. As Maggie tries to pull her son away from the questionable influence of Vincent, Oliver refuses to give up on his crusty neighbor, and sets about using a school assignment from his teacher Brother Geraghty (Chris O’Dowd) to delve into Vincent’s past and prove to the world—and to Vincent himself—that his gruff exterior hides a caring, wounded person.

If any of that sound familiar to you that’s because, by and large, it is. The story beats in St. Vincent have been done many times before in other films. At this point, “lonely boy forms unlikely bond with haggard older mentor” is as synonymous with prestige film season as “somber period drama” or “presence of non-pirate Keira Knightley”, and is for the most part just as predictable. Is the mentor in deep with some nefarious thugs? Yep. Does a meek child learn to defend himself and beat up a bully with surprisingly little consequences? Ah-dur. Will a parental figure yell at the haggard older mentor about “only caring about themselves” Well, obviously.
The specter of the familiar hangs over just about every scene in St. Vincent softening the impact of even the most touching scenes. Though certainly well crafted by first time director Theodore Melfi, Melfi doesn’t take us anywhere new, as even the big tearjerker scene in the film’s final act brings to mind other, similar scenes so as to be distracting.

But still, a film dealing in familiar plot mechanics and themes can be heightened by strong performances of well-worn characters; and this is selectively the case with St.Vincent. Since his reinvention as a sought-after indie sensation and The Internet’s Favorite Person within the last 15 years, Bill Murray has given some of the best performances (and he wasn’t exactly too shabby before), and his turn in St. Vincent is no exception. Murray has played jaded, occasionally reprehensible older men struggling with fading masculinity before, but Murray expresses these qualities in ways much different from his turns as Steve Zissou and his ilk. Murray is grimy and appropriately layered, and makes even the most played-out notion of the softhearted angry old man textured and tangible. Even when Vincent takes on what appears to be his version of a bad Christopher Walken impression in the wake of his character having a stroke, there’s real heart in the performance. Also doing great things with a potentially generic role is first-timer Jaeden Liebehrer as Oliver. Gawky, small, and brainy, Oliver gets to be funny without seeming scripted in the manner neither of Hollywood nor too much like the overly earnest embodiment of innocent childhood that seems to plague some indie films. Liebehrer is funny, bright, and given the same capacity for anger and negative emotion as you would expect from a real, if wiser than average, 12 year old.

Unfortunately, the same depth of character doesn’t extend to many of the other characters, many of which feel underwritten or like outright caricature. Melissa McCarthy does excellent things with what she’s given as put-upon mother Maggie, but it rarely feels like enough. A disappointing amount of her screen time is spent on her arguing with Vincent, crying, or fretting over the crumbling of her marriage. It’s cool to see an actress like McCarthy take a role different from her usual performances, but the script and underwritten Maggie rarely play to her strengths. The rare moments where she’s allowed to crack a joke or be funny are great, but these scenes are few and far between. Terrence Howard’s Zucko is a cartoon of a greasy bookie. The two times he shows up in the film, he approaches the performance with the nuance of someone who spent an afternoon watching the Fat Tony episodes of The Simpsons and practiced a “tough voice”. The performance I took that I took most issue with, however, was Naomi Watts as Daka. While the film attempts to peek past the conventions of the “hooker with a heart of gold” arcehtype and provide her with ample screen time to do so, she often feels more like Bad Russian Stereotype than fully realized character. Daka spends so much of the film yelling about money in broken, heavily accented English that it begins to feel like a bad joke. “This place is peace” she says of a pond she visits with Vincent as I audibly groaned at my Tuesday matinee screening. At no point does it seem like it occurs to the screenwriters that perhaps the best way to dismantle a stereotype is not to place it on screen for long stretches of time and try to humanize it rather than just not using the stereotype in the first place. 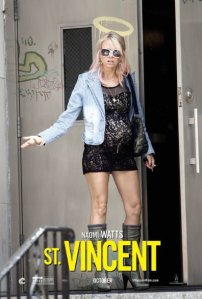 The film does a lot of work to invert some of the other stereotypes of this kind of drama and, refreshingly, makes a few archetypes actual humans. Oliver’s bully and his father, both of whom could have been easy Bad Guys are treated as people instead of challenges. Dario Barosso as Oliver’s bully Ocinski becomes his friend and, while perhaps not as deep as one would want, is thankfully treated as more than a mindless thug to be taught a lesson. Even the philandering father, here played by Scott Adsit (who also provided the voice of lovable balloon robot Baymax in Big Hero 6) isn’t the absusive psychopath of many a boy/rugged mentor film, and even Oliver is willing to look past his crappy qualities to realize his father isn’t a monster. It’s small details like this that make the film stand out amongst it’s many played-out scenes, but which also highlight how egregious Daka’s characterization is.

Terrible stereotypes aside, I can’t call St. Vincent an outright bad movie. It’s well constructed and features some good performances, yet none of these quite help the film overcome its sense of sameness. If you’re interested in watching Bill Murray be an ornery Brooklynite (and that is truly tempting), you might want to catch this on VOD or home release, but, for most viewers, it’s likely you’ve already seen this story under a different title.

One thought on “A Bomb in the Lasagna: You’ve Probably Seen “St. Vincent” Before”