With Disney’s purchase of Marvel in 2009, it was a question of when audiences would see a Marvel property under the Disney animation banner, not if. Perhaps that’s why it was so surprising that Disney’s first animated Marvel film wasn’t based on renowned characters, but a reimagining of a comic obscure to all but the most diehard Marvel fans, allowing Disney some room to improvise without risking the ire of comic fans. In result, Big Hero 6 is a film imbued with the strengths of Marvel, Disney, and anime, but also saddled with some of their weaknesses as well. 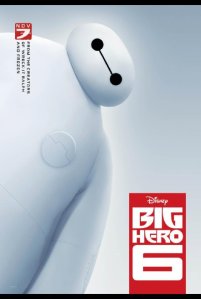 The Plot: Having graduated from high school at 13, orphaned (therefore fitting Disney and superhero origin quotas) boy genius Hiro Hamada (Ryan Potter) is content to squander his gifted mind for robotics and engineering on hustling opponents in illegal robot fights in his hometown San Fransokyo. Hiro’s ambitions change when his older brother Tadashi (Daniel Henney) takes him to visit his university and meet world famous robotics expert Professor Robert Callaghan (James Cromwell), who challenges Hiro to apply to his school. At an admissions exhibition, Hiro unveils a prototype for microbots that could push the limits of technology, all but securing Hiro’s admission. Hiro’s celebration is short-lived, however, as a fire in the exhibition hall claims the life of his brother and of Professor Callaghan. Heartbroken, Hiro refuses to interact with anyone but his aunt and legal guardian Cass (Maya Rudolph), until he discovers that someone else is manufacturing his microbots, and that their intentions for them may be pretty evil. Utilizing his robotics skills, and with the help of his brother’s college friends Wasabi (Damon Wayans Jr.), Honey Lemon (Genesis Rodriguez), Go Go (Jamie Chung), Fred (T.J. Miller), and his brother’s cute, inflatable medical care robot Baymax (Scott Adsit), Hiro puts together a superhero team to find the mysterious kabuki masked microbot thief and put a stop to his plans.

As mentioned above, Disney worked to create something that had touches on what makes Marvel and Marvel films so appealing, while existing distinctly outside of the cinematic universe which Disney and Marvel have created. Outside of the necessary Stan Lee cameo (a presence no longer reserved to characters he helped create apparently), this film is more akin to the worlds built by Disney and Pixar. Stellar animation and production design create a bright and vibrant city that’s much more interesting and suited to the story than the slightly heightened versions of New York/DC/LA/the uninteresting small towns from Thor and Iron Man 3. As its portmanteau of a name suggests, San Fransokyo collides San Francisco and Tokyo into a city that blends elements of both into a busy, hyper-modern metropolis where Blade Runner-esque billboards illuminate buildings and giant fish-shaped aircraft things float above skyscrapers. It’s clear that anime and manga informed the design and portions of the plot in a way that was immediately clear to someone who grew up glued to Toonami on Cartoon Network as a kid. Clearly, Osamu Tezuka was taken into consideration here as much as Stan Lee and Jack Kirby or Walt Disney himself.

While the design is more Astro Boy than Avengers, the film’s Marvel heart can be felt most distinctly in its themes of loss and revenge. From the moment Ben Grimm emerged a monster instead of a super-idol in the pages of Fantastic Four #1 and Peter Parker learned the consequences of letting a petty crook escape in the hardest way possible in Amazing Fantasy #15 back in 1962, Marvel has been a company where pathos and inner-conflict have defined their superheroes as much as spandex and superpowers, and Big Hero 6 is no exception. Between the (unexplained) death of his parents and his brother, Hiro carries tremendous loss with him throughout the film, driving Hiro forward and informing his decisions, occasionally leading him to choices that are morally questionable but which he feels might bring him solace. Ultimately, it’s a movie concerned with overcoming grief and understanding the difference between fighting crime for revenge and fighting crime to do the right thing; especially when it’s revealed that the main villain (called Kabukiman in the film, but henceforth called Tinybots Spookyface in this review). That Baymax is a robot built specifically for healing that is taught to fight in Hiro’s quest for closure crystallizes these themes (it’s on the nose, but it’s a kid’s movie). Rather than a theme injected to give fans something to chew on between jokes n’ fights, the notion of loss is central to the core of the movie and one handled with deft emotional maturity.

The relationship between Hiro and Baymax is far and away the best in the film. As voiced by Scott Adsit (Peter on 30 Rock), Baymax is eternally chipper and helpful, even during a crisis such as, say, a supervillain bringing a hideout on a quarantined island down around the protagonists. So much of the best humor in the film comes from the interactions between Hiro and Baymax, Baymax failing to grasp human expressions and interactions. There’s a fist-bump gag that gets funnier every time it’s brought back in the film and which will probably make me unbearable every time someone tries to fist-bump me for the next few months. They build a rapport that fits the high standards set by such forbearers of the “a boy and his robot” genre as T2 and The Iron Giant, with spoiler an inevitable poignant fourth act scene that evokes both, if you know what I- hold on a sec, I’ve thought about The Iron Giant ending for too long. Excuse me, I need a moment.

As strong as the dynamic between Hiro and Baymax is, it also reveals the weakness of the film’s supporting characters in comparison. While certainly enjoyable to watch and with their share of funny moments, the other heroes in this film are surprisingly hollow. Despite their title billing, the four members of Big Hero 6 who aren’t Hiro or Baymax aren’t given much characterization beyond their surface traits. Go Go is headstrong and tough, Honey Lemon is ditzy and caring, Wasabi is precise and cautious, and Fred is the lovable comic-obsessed slacker. The film rarely explores these characters so that we know them in any way other than their relationship with the central character. This strikes me as odd in a movie about a superhero team, as they are by their very nature driven by the complexities and traits of their members. The Avengers and X-Men work well on screen and on the page because they are teams composed of distinct, occasionally conflicting personalities that must work through their issues for the greater good. Here, a majority of the team serves only to help the needs of Hiro, and end up less lively than the robot that is literally built to fulfill Hiro’s needs.

Also curiously thin is the plot. Carried by the themes discussed above, it’s nonetheless pretty easy to see where this film is going before it happens. Perhaps because it has taken so much inspiration from superhero cinema and anime, anyone with even passing familiarity with the genres or has seen a cartoon in the past 15 years will know the beats of this film. Also problematic is the way in which information is delivered. When Microbots Spookyface’s entire back-story is delivered through conveniently functional video footage in a years abandoned laboratory, it may be time to rework the script a little.

The plot may be played out for seasoned viewers, the animation and action still dazzle. The action in the film is breezy and energetic, especially as the characters learn to play to their individual strengths to compliment each together to pull together as a team. The animation for the microbots is particularly stunning, the level of detail becoming most impressive in the film’s final act. And this may be a curmudgeonly cape film snob talking, but it was really refreshing to see a superhero battle that didn’t level an entire city.

Midway through the film, I realized that, with its anime influences, futuristic design, and robot action, had this film come out when I was 8, it would have been my favorite movie in the entire universe. While still incredibly enjoyable at 23 (I’ll gladly watch whatever sequel or spinoff inevitably comes of this), the flaws seemed a little clearer than I would have noticed at 8. Though a little blurry around its edges, Big Hero 6 is exciting hero cinema and well worth checking out, even if you don’t necessarily need to run out to theaters to see it immediately.