The Hollow Crown! Part 3: Henry IV, Part 2. Lots of numbers. I probably could have done this in the same article as Part 2 of The Hollow Crown, which was Part 1 of Henry IV… Not much has changed to be honest, except all of the characters because they’re developing because Shakespeare knew a lot about people. 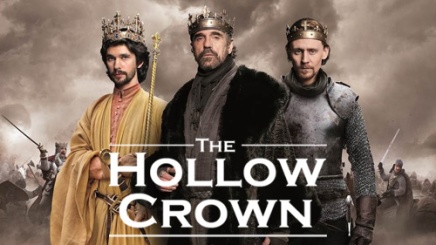 The Plot: Falstaff (Simon Russell Beale) is living it up as an Earl following his commendations for the death of Hotspur, who in actuality was killed by Prince Hal (Tom Hiddleston). In an uncharacteristic stroke of generosity, Hal allowed Falstaff to take the credit, even though the truth would have solidified Hal’s position in his father Henry’s (Jeremy Irons) esteem. Unfortunately, Henry is nearing the end of his days and believes that Hal will be a miscreant king, and will be unable to manage the responsibilities of leadership. As Henry’s death approaches, Hal must choose between his two lifestyles, and more importantly, between Henry and Falstaff.

The only major complaint I had about Henry IV, Part 1 was that Richard Eyre didn’t quite know how to manage the lengthy soliloquies. This wasn’t a problem here, for some reason. He has no voiceover, no breaking the fourth wall, just pretty straightforward direction. I’m not sure why that happened in Part 1 and not in Part 2. It just seems like a weird mistake to be inconsistent with, especially because these were made simultaneously. Once again, Eyre doesn’t go crazy with his direction; there’s not a lot of imbedded symbolism or layered imagery, but that’s okay. He does his job competently and without offense.

What I said about the performances in my previous article remains true. Tom Hiddleston does an excellent job managing Hal’s arc, and making sure the struggles he faces in this play don’t seem too redundant, even though they’re very similar to those in Part 1. Essentially, Hal’s made his decision by the climax of the first play, and in this one must only figure out how to go about convincing his father he’s worthy of the crown, and how to let go of Falstaff. Hal’s reluctance is appropriately humanizing, but is secondary to his resolve. His sense of duty overwhelms his love of his lifestyle, and though he mourns its loss, he knows it can’t concern him too fully. 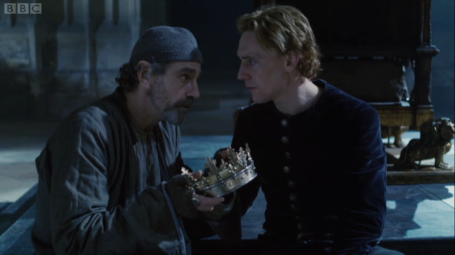 Falstaff, too, begins to come to terms with things. The first time I read this play, it felt like mostly comedic filler distracting from the much more important conflict of Hal’s impending coronation. Simon Russell Beale manages to make me care more about his relatively pointless subplot than Hal’s story. Basically, he spends most of the play dithering in the middle of nowhere with some old pals. Beale’s performance and Eyre’s subdued direction make these sequences heavily pathetic. The life Falstaff led with Hal wasn’t spectacular, and Hal was borderline cruel to him, but it still brought him a certain degree of joy. Now, he faces a preview of life without Hal, forcing him to confront the soul-crushing realities that surround him. The “chimes at midnight” scene is especially heartbreaking to watch, second only to the (spoiler) climactic rejection at Hal’s coronation. Beale manages to show an alarming amount of inner devastation in a single look. His performance is never over-the-top, which is amazing for a Shakespearean clown (and even more amazing for a tragic character). I can’t fully express how much I loved his performance. It’s a real shame he’s not in the next one. I shall miss him dearly. 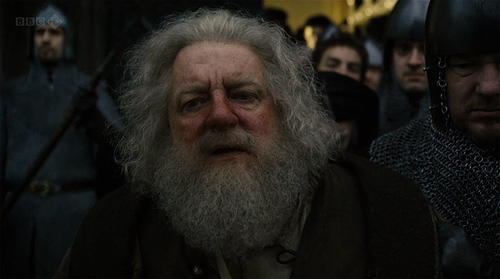 The great success of this film is that it does feel like an equal part of four. If one play in the tetralogy stands out as a little less necessary, it’s Part 2, but the production—particularly Beale and Hiddleston—elevate the conflicts of the story to a high point of drama, producing relatable characters with issues, ambitions, and feelings that are easy to understand and relate to despite the language and the social and historical barriers. This is an old play about even older people. To add to that, they’re wealthy and powerful, and their personal struggles are intrinsically linked to the future of a nation. Most audiences can’t directly identify to that situation, but as I’ve mentioned before, Shakespeare has a wonderful insight into humanity. He knows what makes people tick, which will be demonstrated further in Henry V. Whether or not the actors have that same complex knowledge of people doesn’t matter; they clearly get Shakespeare. It’s rare to see actors who have such a clear concept of their characters.

The question surrounding all Shakespeare adaptations concerns their necessity. With so many Shakespeare movies in the world, and so many more on the way, one has to ponder whether or not we need all of them, especially because so few are actually good. I know that there’s one installment left in the tetralogy, but Falstaff isn’t in it, and neither is Hal (because he’s morphed into Henry V, Power Rangers-style; it’s a great scene), so I’m closing the book on Henry IV with this statement: it was necessary. While Richard Eyre did stumble a few times directorially, all wounds are healed by Simon Russell Beale and Tom Hiddleston. I don’t mean to overstate anything, but it’s possible that Beale was born for this role.

One thought on “Second Breakfast: Brush Up Your Shakespeare 10: The Hollow Crown (Part 3)”