Terry Pratchett, or I should say Sir Terry Pratchett, in his book Sourcery, outlines a wonderful conceptualization of inspiration. He imagines particles of inspiration rocketing through the multiverse, just waiting to strike some poor, unsuspecting brain. Sometimes they hit the wrong brain, one of a “small and bewildered duck,” for example. Some people’s brains are just so perfectly configured that they operate as magnets for inspiration particles, and they end producing countless and invaluable ideas to humanity. Shakespeare, I believe, was one of these. He’s responsible for the development of modern English, and he invented over 1700 words still in use today, including, by the way, Jessica. His mind was struck countless times by inspiration. In fact, you could say that it bombarded him.

Before you ask, yes, that was a hundred-and-twenty word build-up to a cheap pun, but that’s the kind of thing Shakespeare was all about, much to the infuriation of many modern readers. Despite the base humor and rambling setups—despite the abhorrent Comedy of Errors—Shakespeare had a pretty sweet career, and wrote some pretty sweet plays, and for some reason we just can’t get enough of him. That’s why there are over a thousand adaptations of his works for film and television to date. Even though we’re practically being drowned in Shakespeare, I still feel the Histories don’t quite get their due representation, which is why I’m very excited to be devoting the entire month of July to his most popular tetralogy: Richard II, Henry IV Part 1 & 2, and Henry V. Sorry for the lengthy intro. 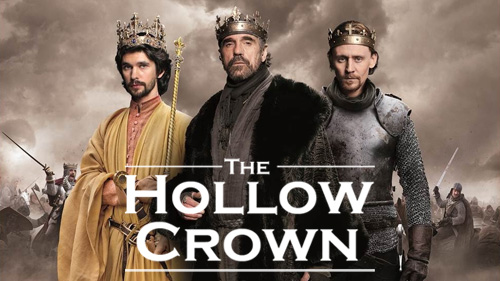 The Plot: Richard II (Ben Whishaw) is not what you would describe as a particularly good, or competent, or thoughtful, or useful monarch. He’s just really bad at his job. He likes the decadence and comfort, but hates conflict of any kind and will avoid it like the plague, always opting for the quickest and easiest resolution, regardless of long-term consequences. This is particularly problematic when faced with his cousin Bolingbroke (Rory Kinnear) accusing his close friend Mowbray (James Purefoy) of high treason. Unsure of how to respond, Richard exiles both of them. When Bolingbroke’s father, John of Gaunt (Patrick Stewart) dies, Bolingbroke breaks his exile to pay his respects, only to discover that Richard has seized his rightful inheritance to fund a war in Ireland. Needless to say, Bolingbroke is mightily displeased, and now Richard has an unavoidable conflict on his hands: civil rebellion.

This is a great play and the first of Shakespeare’s eight-part canonical history of the War of the Roses. Though all of the characters in this play are long dead by the time the actual War begins, the conflict they’re disputing is the justness of Bolingbroke’s revolt. It’s a wonderfully crafted story, and a very rewarding reading experience. Richard II is one of those great histories that borders on tragedy. The character of Richard is, in many ways, a tragic hero. Incompetence being his major flaw. I’ve always read him as a woefully unprepared chap, whose heart is basically in the right place, but who’s completely ill-equipped for the demands of kingship, simply because he’s been pandered and sheltered by an entourage of yes-men. You can’t help but pity him by the end of the play.

Unfortunately, I didn’t feel that level of affection for Whishaw’s Richard. This interpretation of the character presents all of the characterizing flaws without any of the pathetic charm. Richard is, in both play and film, at times kind of a jerk. He can’t handle a situation when it is in his control, and as soon as he’s lost hold of it, he falls back onto desperate accusations and weak attempts at gaining pity from his enemies, making several allusions between himself and Christ, proclaiming Bolingbroke & Co. “worse than Judas.” These rhetorical techniques are not supposed to actually work on the audience, but just make Richard a more shameful failure before he finally comes to terms with his defeat. Director Rupert Goold, who does provide some exquisite visuals, opts for some rather heavy-handed visual comparisons between Richard, Jesus, and St. Sebastian, seemingly missing the point. This technique wouldn’t be as problematic if Whishaw had done a better job making Richard more loveable earlier on, but he comes off as a spineless, occasionally despicable, overpowered fool of king instead, so I’m not sure what the Christ/Sebastian visual cues are really supposed to accomplish. 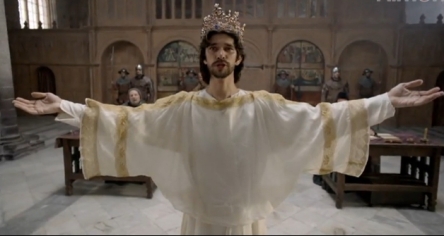 This is only Goold’s second cinematic endeavor, so clearly he has work a few things out. There’s great promise in his direction, though. When he’s not getting caught up in misguided symbolism, he achieves some wondrous shot-composition. With the exception of a few overly-stylized scenes (one or two, only), this is a magnificently filmed adaptation. Goold didn’t have a hand in the other three installments of the tetralogy, directed by seasoned veteran Richard Eyre and relative newcomer Thea Sharrock, but hopefully the visuals will remain as strong throughout.

Despite a poor realization of… you know, the main character of the movie, most of the other performances are really good. Kinnear’s Bolingbroke is perhaps a bit wooden, and it probably doesn’t help that the character is played by Jeremy Irons in later installments, who will likely be anything but wooden. The best performances are by Patrick Stewart as Gaunt and David Suchet as the Duke of York, but I guess we shouldn’t be surprised by Patrick Stewart being good in Shakespeare. The only major disappointment is Ben Whishaw. I had high hopes for his performance, but got the impression that he just didn’t know where to go with the character. It’s unfair that he had so many scenes with Stewart and Suchet, who clearly both knew their Shakespeare, because his delivery doesn’t feel as natural or as thoughtful as theirs. 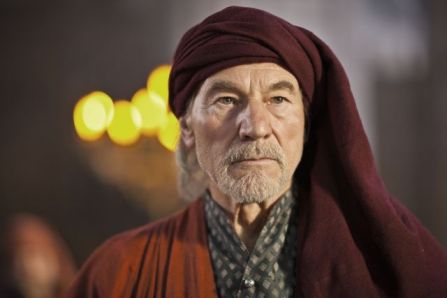 I don’t expect this to be as much of a problem with the Henry films, starring Jeremy Irons as Henry IV, Tom Hiddleston as Hal, and Simon Russell Beale as Falstaff. I think we’ll be just fine.

One thought on “Second Breakfast: Brush Up Your Shakespeare 8: ‘The Hollow Crown’ (Part 1)”