Last year I reviewed two films from Korean director Chan-wook Park: his new release, Stoker, which I’ve referenced several times since then, and his most famous film, Oldboy. I watched these films a couple weeks apart, and it’s been over a year since then. I needed that year. I really needed it. Oldboy, for anyone who has not yet seen it or read my article, is a harrowing experience, despite its cinematic excellence and surprising sense of humor. The year off has settled my immediate repulsion, and in retrospect, I realize that I quite liked that film. The same goes for Stoker, which was considerably less disturbing, but which has been rising in my esteem as of late.

Anyway, I’m beginning to recognize a pattern in my relationship to Park’s oeuvre. It goes like this: I hear about a movie; I am intrigued; I learn that he directed it; I am hesitant; I learn more about it; I realize that it will be very disturbing; I decide I shouldn’t watch it; I develop a morbid curiosity for it; my interest gets the better of me; I watch it; it upsets me at least on some level, but I appreciate how well it’s made; I move on with my life; months later, I find that I can’t stop thinking about it, and realize that I really, really liked it, despite the fact that it was disturbing.

The Plot: Sang-hyeon (Kang-ho Song) is a Catholic priest and all-around splendid guy, but most of his time is spent listening to the confessions of dying hospital patients. This starts to bring him down a bit and he decides he wants to do something that will really help people, you know, before they die. He volunteers as a test subject for a study on a deadly disease, hoping that he can help find a cure. Well, things go south, he dies, but a miraculous blood transfusion brings him back moments later. Since he is the only survivor of 500 patients, people start treating him as a saint, asking him to pray for their ill loved ones to cure them. Among these people is Lady Ra (Hae-suk Kim), the mother of Sang-hyeon’s cancer-ridden childhood friend Kang-woo (Ha-kyun Shin). While caring for Kang-woo, Sang-hyeon experience a strange attraction to Kang-woo’s unhappy wife Tae-ju (Ok-bin Kim), he also starts to notice other animalistic urges surfacing. It’s not long before he realizes that his transfusion was tainted with vampire blood, and that he himself is now a creature of the night. The ensuing plot regards Sang-hyeon’s intense inner struggle to remain pious in the face of his own vampirism.

Like Stoker and Oldboy, Thirst is a highly visceral film; it’s extremely violent, gritty, and pretty disturbing, but that’s not what makes it horrific. It’s weird how Park manages hyper-violence in horror without allowing it to contribute to horror. Thirst is an atmospheric film, and the ambiance is one of nausea, craving, and lust. It’s uncomfortable to watch, but would still be that way even if there was no blood in the whole movie. If anything, this speaks to Park’s quality as a director. He’s subtly excessive. It’s weird, but it works super well.

Horror aside, Thirst is not in any way your standard vampire movie. Even though the main character is an undead monster for most of the film, the story is very human. Sang-hyeon’s arc is heavily grounded in widely-applicable existential conundrums. Some vampire mythology, like, for example, the familiar Buffy type, opts for a strictly evil, immediately soulless vampirism. That’s not how it is in Thirst. The title is very appropriate, actually. It denotes an intense, animalistic craving that exists in everyone. Sang-hyeon is an objectively decent man, but the vampirism magnifies all those carnal urges he’s worked so hard to suppress all his life. Suddenly, he’s finding it difficult to overcome sexual yearnings, hunger, and the desire to kill those who do wrong. His Catholic sensibilities battle against these morally corrupt inclinations, but how long can he manage it?

This also allows for a nice discussion of criminality, especially with regards to the mentally deranged. Park treats vampirism as a disease. Once he’s exposed himself to Tae-ju, Sang-hyeon desperately tries to convince her not to shun him. In his defense, he asks her how she would treat a victim of cancer or a cripple. Does the cancer patient ask for cancer? No, he gets it against his will, just as Sang-hyeon has become a vampire against his will. He doesn’t want to commit crimes, but he’s struggling to conquer what the disease has established as needs within him. Does it remind you of the werewolf argument at all? It’s also applicable to the wider debate over the criminally insane and how to treat them. Can we forgive their crimes? Are they to blame for their loss of control? What do we do with people who need to kill? What if there’s no cure? What if this was you or someone you loved? Thirst asks all of these questions, but doesn’t provide any concrete or absolute answers. Rather, Park wants us to think. 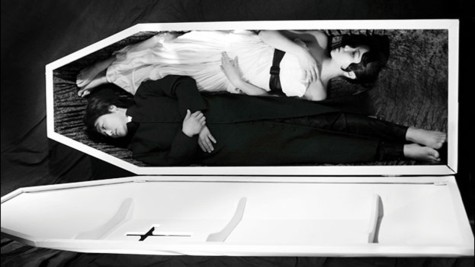 Focus Features International
Not a typical vampire movie, but, you know, some elements creep in.

Surprisingly, the film credits itself as inspired by Thérèse Raquin by Emile Zola. Admittedly, I have not read the book, but I understand it takes place in France and features neither priests nor vampires, but certain characters, plot elements, and themes remain the same. I guess this can operate as a testament to the wondrous possibilities of adaptation. You can take a Zola novel and turn it into a weird Korean vampire movie to great success, apparently.

Overall, I quite liked Thirst. If this follows the same progression as Oldboy and Stoker that should mean I’ll like it even more in a few months. Chan-wook Park is a fascinating director, even though his movies are often really disturbing. Nonetheless, I’m bummed to glance at his IMDb page and see he has no up-and-coming projects listed. Hopefully he can make a new movie soon so I can hear about it, become intrigued, learn that he directed it, act hesitant, learn more about it, realize that it will be very disturbing, decide I shouldn’t watch it, develop a morbid curiosity for it, allow my interest to get the better of me, watch it, let it upset me at least on some level, but appreciate how well it’s made, move on with my life, and months later find that I can’t stop thinking about it, and realize that I really, really like it, despite the fact that it was disturbing.