Remember a few weeks back when I reviewed Oldboy in anticipation of Stoker because all of the advertisements for Stoker seemed to recommend that I try Oldboy, and then I did try Oldboy and I had a minor freak out, but decided in the end that I still wanted to watch Stoker, and I made a pun about how “stoked” I was? Remember that? 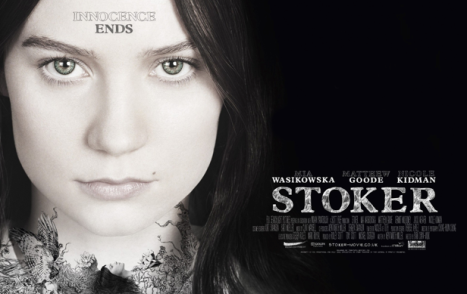 The Plot: India Stoker (Mia Wasikowska) is a weird girl living a weird life. Her weird life gets even weirder when her father (Dermot Mulroney) dies under mysterious circumstances and her even more mysterious Uncle Charlie (Matthew Goode), of whom she has never before heard, shows up and begins an unconventional relationship with India’s mother (Nicole Kidman). What’s the deal with Uncle Charlie? How did India’s father die? How do we feel about incest, you know, as a concept? Is this movie going to be scary or just disturbing? All these questions and more are asked; not all of them are answered.

So, I guess to start I should mention that this is from the same director as Oldboy, Chan-wook Park. Or Park Chan-wook. Tell you the truth, I’m entirely unsure how that’s supposed to be written, and different sources keep telling me differing things. Hey, Chris, have you met Ignorance? Once or twice, good buddy, once or twice. Anyway, in my review of Oldboy I glorified Park’s exquisite direction. Basically, I said that the film was technically perfect. I can’t quite say the same thing about Stoker, unfortunately. While very well directed, and aesthetically beautiful, the film is not without fault. I think that many of its biggest problems lie with the screenplay by first-timer Wentworth Miller. It’s a clever story, an intriguing mystery, and has some interesting things to say about family, mental imbalance, and violence, but the dialogue is, by and large, very stiff and unnatural. I can’t confidently criticize the actors for this stiffness, because they’re all very talented performers and they tackle the material with appropriate levels of crazy, but the dialogue ranges from bland to forced to clichéd to uninspired, and sadly does not do the story or characters justice.

Of course, some of that fault could lie with the director, as he was responsible for the staging, and theoretically could have thought of some good ways to spice up the script. This is Chan-wook Park’s first American film, and, though I don’t know for certain, it’s possible that he’s just not accustomed to working in English. Interestingly, English and Korean are very different languages. Often when watching a foreign film, I’ll read the subtitles and think to myself, “Boy, am I ever glad that I don’t have to listen to this in English, because what sounds really good in Korean/Japanese/German/French/Spanish/Italian/Mandarin/Hindi/Arabic/Hebrew/Danish/Swedish/Portugese/Elvish/Canadian/Dutch/etc. sounds really really really dumb in English.” I felt that I probably would have preferred Stoker in Korean.

The worst writing (and also acting) comes from the bizarre and unnecessary high school scenes. India is bullied and molested by some jock stereotypes that are so poorly written that I just… never mind. Frustrated. “Hey, Stoker, or should I say Stroker, because I hear that’s what your mom has been doing… to your uncle.” While I have no doubt in mind that teenagers do say such stupid things (I went to high school once, too, you know), there’s just no excuse for dialogue like that to appear in a serious movie.

Aside from the dialogue, Stoker has few weaknesses. The actors—particularly Wasikowska and Kidman—all deliver strong performances. Mia Wasikowska is, in this film, transformed. I’ve always really liked her as an actress, and she has a tendency to brighten up even really weak films (see Alice in Wonderland), but she definitely has a type of role. Generally, she’s the sweet, virginal, but curious girl who breaks rules, but not any really serious rules (Alice in Wonderland, Jane Eyre, Lawless). Stoker is a little different. The whole movie has kind of a fairy tale vibe, and like in so many fairy tales, it has a really twisted theme of sexual maturation. Like Snow White, Briar Rose, Little Red Riding Hood, Cinderella, and countless other heroines, India makes the transformation from girl to woman following a series of events with an older, strange male in the absence of her father. See how that works? Well, much like her character, Mia Wasikowska plays what will likely stick out as a transformative role in her career. She’s shown now that she has a versatility and artistic range. She can be good, sweet, innocent, and funny, but she can also be dark, violent, strangely sexual, and creepy.

Fox Searchlight
I’m kidding. This is actually a still from Alice in Wonderland. She hasn’t changed a bit.

Let’s talk about that creepiness for a little while, shall we? Stoker has been marketed as a horror film. Let’s review: isolated setting, Gothic house, mysterious death, handsome stranger, disturbed child, Clint Mansell soundtrack, murder, cinematography, opera, the act of digging, a name that recalls Dracula (because Bram Stoker wrote that book, but you all knew that); yep, sounds like we’ve got a lot of potential for horror. Indeed, Stoker is absolutely packed to brim with potential for horror, but only some of that potential is realized. I generally don’t like horror movies. I don’t like being scared, but I love and appreciate the technical prowess and sophistication that it takes to create a good horror movie. That having been said, I was really disappointed by how scary Stoker wasn’t. It was morbid, it was macabre, it was disturbing, it was unsettling, it was creepy, but it wasn’t scary, and it could have been, and it probably should have been. What’s more, I think it had the initial intention of being scary. The story and the characters certainly called for it, and Chan-wook Park tended towards shooting things in a horror style, but overall, it just missed out. There were a lot of scenes and motifs towards the beginning that I expected to be the setup for a really scary sequence later on, but that weren’t. For example, early on in the film, India ventures into her expansive, creepy, poorly lit basement. Dim lights hang from the ceiling and illuminate only what is directly underneath them. In order to properly navigate, India pushes the lights so that they swing like pendulums, creating a swaying strobe-light effect, and I thought, “Damn, I guess I know where our climax is going to take place.” Nope. The basement is used in one other scene, it’s not creepy, and the light thing doesn’t matter. It’s that kind of stuff that really disappointed me.

Fox Searchlight
“Uncle Charlie, why is there an acclaimed Korean filmmaker in our basement?”

I don’t mean to be too critical, and I hope I haven’t come across as scathing, because Stoker is not a bad movie. In fact, it’s really quite a good movie. It’s intriguing, inventive, and mostly well executed. It draws heavily upon fairy tales and Gothic literature, which is never a bad thing, and the brilliant soundtrack by Clint Mansell (Requiem for a Dream, Black Swan) only enhances that dark ambiance. Park and Miller have some really interesting things to say, they just tend not to say them very well. I think, however, that this will prove to be an important film in the long run for the careers of Mia Wasikowska (who will now be making grown-up movies), Chan-wook Park (who will now be making American movies), and Wentworth Miller (who’s had success as an actor in things like Prison Break, and shouldn’t give up this writing thing quite yet).

3 thoughts on “Second Breakfast Gets Stoked About ‘Stoker’”