Did anyone read my review of Much Ado About Murder? I published it several months ago. Let me tell you, friends, that is a truly great movie. I only bring it up now because I have a strange feeling that this week’s article is going to be a somewhat similar rant/rave. I’ll just cut right to the chase. What I have for you all this week is a double feature of epic proportions: a double feature… of 1970s luchador films.

I am pleased to present:

The Plot: World famous lucha libre superstar El Santo (himself), renowned not only for his incredible wrestling career, but also for his monster-fighting prowess, is hired as an escort on a scientific quest into the jungle to disturb the tomb of a millennia-old mummy and incur its wrath. Well, that’s not the official objective of the expedition, but you get the idea. Anyway, sure enough, the scientists profane the resting place of this ancient mummy, and soon after start dying one by one. Has the mummy returned from the dead to seek vengeance, or is there a more Scooby-doo explanation? Only Santo can find out.

The Plot: Trouble’s afoot! By that I mean some crazy scientist has been kidnapping women, switching their brains, killing them, resurrecting them, and unleashing them on an unsuspecting society. Santo and his on/off nemesis/best friend Blue Demon don’t see a reason to get involved until Santo’s maybe girlfriend goes missing. This time, it’s personal. Some savvy investigating uncovers an army of super strong zombie-like creatures, a centuries-old mystery, and a disturbing truth. Will they manage to save the helpless lass? They might, and maybe along the way they’ll learn that there’s more to justice than just a personal vendetta.

To begin with, the most important thing for all of you to know is that Santo was a real-life luchador. He was King of the Ring, Cinematic Icon, Philanthropist, and, perhaps greatest of all: Folk Legend. That’s right. Santo was so beloved amongst the people of Mexico that he eventually took on a legendary status, even within his own lifetime. People loved this guy, and how could they not? Almost every online biography I’ve seen of him at some point describes him as a “symbol of justice for the common man.” Santo had it all, man. That’s all I want in life: to someday become so good at what I do that I assume a mythos and become a symbol of justice for the common man. Santo was Mexico’s Batman, but real. And of course, he never removed his mask, except once, a week before his death, just to show everyone that their beloved hero is no more special than any other man, and that anyone can do what he did, and also I think because he wanted to remind them that he was human, and all humans have to die at some point. Santo was buried in his mask, though, and his funeral is generally considered to be the biggest in Mexican history. Several statues have been erected in his honor since then.

So, about these actual movies. How can I sum them up in a concise way? They’re great. Santo en la Venganza de la Momia has pretty much everything you would want from a movie like this: a wacky professor/nutty old codger, a mummy… um… Santo fights a panther at one point. I think the thing I loved most about this movie was… the fact that it was great. Never mind. Abort that sentence. No, but seriously, I loved a lot of things here. The backstory for the mummy is lifted almost verbatim from Karl Freund’s 1932 film, just translated to Mexico. The design for the mummy itself is awesome and surprisingly creepy. And the script! Oh my goodness, the script is fabulous. There’s a good deal of unintentional hilarity mixed in with the deliberate humor. My favorite moment comes when people start really panicking about the mummy coming back, and turn to Santo for help or an explanation. Now, despite all the crazy stuff he’s seen over the years—vampires, werewolves, ghosts, witches, etc.—Santo remains a firm skeptic of the supernatural. In every movie. When people start freaking out, he just very rationally and logically states, “Look, guys, take a moment and think about it. In all of recorded history, no mummy has ever come back from the dead and started murdering people, so why should this one?” Even after he sees the mummy he’s not totally convinced. I’m not sure he’s totally convinced during his climactic wrestling match against the monster. 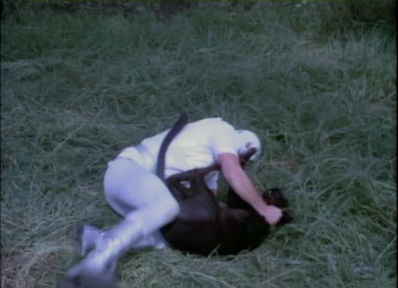 Oh, that deserves a paragraph of its own. Every one of these movies ends with a climactic wrestling match, nicely complementing the other wrestling matches throughout. Usually either right at the beginning or at some completely inopportune moment, there will be some break from the plot to insert a ten-minute wrestling scene. They’re pretty great, and tend to offer some foreshadowing of a great move that will later allow Santo to defeat the monster.

In Santo y Blue Demon Contra el Dr. Frankenstein, the climactic wrestling match is a legit wrestling match. Dr. Frankenstein (not the famous doctor, but his grandson, Irwin) puts his strongest creature in a wrestling mask and challenges Santo to a match in the ring and with a live audience. It’s super-duper. Unlike La Venganza de la Momia, the tone for this film isn’t quite straight horror. There’s a sort of ‘60s Batman vibe to it. Santo and Blue Demon always wear their masks, but not always the rest of their outfits. Sometimes they wear super fly ‘70s suits, complete with colorful ties/ascots, and sometimes turtlenecks. This offers a nice contrast to the safari outfit Santo wears in Momia. Oh yeah, one more thing: these movies are not low-budget black and white. They are in popping color. The color pallets for these movies are out of control.

Goodness me, I’ve broken 1,000 words already. There’s just so much more to say, though. Okay. I’ll wrap this up. The thing that really makes the Santo movies so brilliant is that they have the right attitude. The stories are contrived, the actors are mostly low-rent, the makeup is subpar, the soundtrack is… questionable, the sets are cheap, there are typos in the subtitles, the continuity problems are rampant, and the boom mic even dips into frame a couple times, but despite that, these are excellent films. Santo takes it seriously, and not in an exhausting, grim way. You can tell just by watching that he knows the flaws in his movies, but he doesn’t care. He’s not trying to make art, and he’s not trying to make a lot of money. There’s nothing self-aggrandizing about these films. Santo knows he’s a folk icon, and he wants to be the best folk icon he can be, despite production values. He goes in to each movie, takes his job seriously, and gives it his all. This isn’t a blow-off thing for him. If there’s a bad guy committing a crime, it’s up to Santo to beat the crap out of him, and teach kids what’s right. I mean, that’s what being a symbol of justice for the common man is all about, right?

I’ve seen a couple of Santo’s movies now, and you know how many more I have to watch? Over fifty. Yeah, Santo made over fifty films, battling all kinds of monsters, including zombies, Martians, shark-people, and even Nazis. I have a weird impulse to watch all of them. In conclusion, God bless you, Santo, wherever you are.