Season 2 continues to be excellent. This episode sees Will almost crossing a line, and Hannibal coming even closer to an undignified end. Things are moving quickly now. We’ve still got eight episodes left in the season. We all know what’s going to happen eventually, but it’s getting harder to tell when it will. And that, ladies and gentlemen, is very exciting.

You’re excited to read this recap. I can see it in your eyes. Since that excitement is probably clouding your memory, here’s a picture to remind you what happened in the last episode: WARNING: THERE WILL BE HELLA SPOILERS AHEAD PROCEED WITH CAUTION

While the FBI team tries to move on after Beverly’s death, Will takes action and almost becomes a murderer. The discovery of Beverly’s body leads Jack to conclude that the Ripper is back, but Will won’t tell him who the Ripper is. Because it’s Hannibal, and that knowledge won’t mean anything at this point if Jack doesn’t figure it out for himself. In his quest for revenge, Will begins to ally himself with increasingly unsavory characters. He convinces Chilton to transfer Abel Gideon (yeah, remember him?) to the hospital, since he now remembers seeing him at Hannibal’s house. That goes about as well as you would expect. Then, he stoops even lower, reaching out to Freddie Lounds. The article she writes on his behalf brings the attention of none other than the real Copycat killer, who killed the Bailiff in the trial episode. Guess I owe Hannibal an apology.

It turns out that the Copycat is a fan, and is more than willing to kill for Mr. Graham. Beverly’s death has sent Will over the edge, so he asks his fan to kill Hannibal. The Copycat killer almost succeeds, but Jack and Alana show up just I the nick of time.

“Mukozuke” opens with Jack having breakfast at Hannibal’s house after a long night at Bella’s side in the hospital. Jack thanks Hannibal for saving his wife, but the good doctor doesn’t quite manage to hide the fact that he almost let her die: “As a doctor, I had no choice. It wasn’t what I could do for Bella, it was what I couldn’t do to you, Jack.” Hannibal even says that he’s cool with suicide if a person’s standard of living has sunk too low. There’s a brief moment where Jack gives him a look, because that’s some weird shit to say when your friend’s wife just tried to take her life. Ultimately, Jack waves aside his own doubts and tells Hannibal that he’s a “great friend.” Looks like Hannibal’s coin toss paid off.

Meanwhile, a nervous Freddie Lounds approaches the observatory where Dr. Chilton misplaced a kidney. Halfway up the stairs, she draws a gun, but quickly switches that for a camera when she sees what’s inside. The look of horror on her face is real, if fleeting. She is a professional, after all.

Cut to Jack approaching what is now a crime scene at the observatory. Outside, Freddie stops him: “Send someone else, Jack. She’s one of yours.” Oh, shit. I guess they found Beverly.

Inside, Jack slowly breaks down in silent tears. The camera pans back, revealing Beverly’s corpse. She’s been sliced into pieces, like a museum display of the inner workings of the human body. It’s both gruesome and heartbreaking; Hannibal at its best. 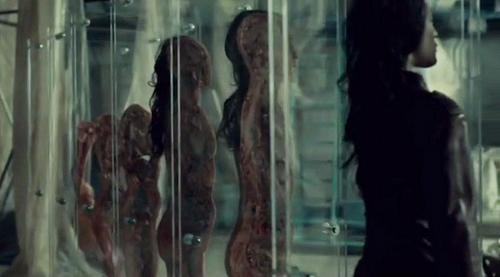 And then, of course, we cut to the credits.

“I Want You to Kill Hannibal Lecter.”

I think that Beverly’s death was the breaking point for Will. It’s more than just losing the only ally he had who was looking for evidence—he lost a friend. Worse, he sent her to her death. Will knows that Hannibal did the deed, but he blames himself. Towards the end of the episode, people keep talking about the need to prevent will from becoming a murderer (I guess we’re not counting GJH). In his mind, he already is. It’s his fault that Beverly is dead. He can’t bring her back, but he can avenge her.

Of course, we know better. That’s why it’s painful to see Will lose himself like this. So far this season, he’s been incarcerated but in control. His memories are coming back, and he’s been slowly manipulating everyone around him in order to set up Hannibal’s downfall. He’s been cunning. Now, grief has buried his moral compass. The scene where Jack takes him to see Beverly’s corpse is heartbreaking. He needs Beverly’s ghost to remind him to put his emotions aside. Unfortunately, the advice doesn’t stick. I guess it’s to be expected. She is just an ethereal manifestation of his guilt, after all. 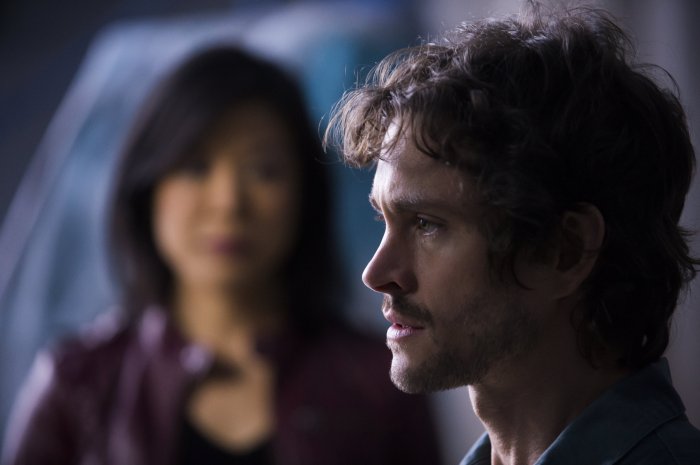 You guys, I know she’s not really a ghost.
Source

His scenes manipulating people like 80s Principal Chilton and Freddie Lounds don’t feel clever anymore—they feel desperate. For most of the episode, he’s trying to put his emotions aside so he can outsmart Hannibal, and he’s partially successful. It’s pretty clear that Dr. Chilton knows who Hannibal really is, now. He’s too smart to play his cards just yet, and too selfish to help Will without something in return. This time, Will dangles the possibility of catching the real Chesapeake Ripper in front of him. Chilton may know how dangerous Hannibal is, but if he keeps having these subtext-heavy chats with the Ripper, he may end up losing more than a kidney.

While it’s a pretty big deal that Will asks for help from Freddie Lounds, it’s probably a worse sign that he also reaches out to Abel Gideon, the artist formerly known as the Chesapeake Ripper. For me, Gideon has always come across as a kind of a tool doing his best to look sophisticated, but he is a real serial killer. He may not be as sharp as Hannibal, but he’s still dangerous. And Will should know better than to think that he can manipulate him into incriminating Hannibal: “Am I your evidence? Oh, you’re in trouble, Mr. Graham.” Yeah, maybe this wasn’t such a good idea.
Source

This conversation serves as more than a reminder of Will’s desperation, though. It’s here that Gideon introduces Will to the idea of killing Hannibal instead of exposing him: “He is the Devil, Mr. Graham…If you want him, you will have to kill him.” A steely-eyed Will responds with: “Fair enough.”

Also of note is the fact that now Gideon knows that Hannibal sent Will to kill him, which makes his eventual decision to save Hannibal all the more interesting. He does it under the pretense of saving Will’s poor tortured soul, but I seriously doubt that was his real motivation. I look forward to seeing how Gideon’s intentions factor into the dangerous game being played by Hannibal and Will.

“Maybe Your Murders Will Become My Murders.”

There are some fairly important conversations that I’m skipping over, but this is already my longest recap yet, so I’m moving on to the end.

The Copycat Killer kind of showed up out of nowhere, didn’t he? Maybe when I re-watch this season I’ll notice him in earlier episodes, but as far as I know he didn’t pop up until the beginning of this one, when Jack is taking Will to say goodbye to Beverly. The Copycat is unhinged and smart enough to be dangerous, but he feels a little undercooked as a character. Still, he serves his purpose, and this episode isn’t about him anyway. It’s about Will crossing a line.

Edit: A Kind Kommentor let me know that the Copycat does, in fact, appear earlier in the season. I guess that’s one mystery solved!

His scene with Will comes across as typical “serial killer fanboy” stuff, and again, it’s more interesting because of Will’s reactions.

Much more interesting, at least in regards to the Copycat, is his scene with Hannibal. He doesn’t seem at all surprised to hear that Will isn’t really a murderer. Maybe he has a Gaydar thing, but with serial killers. I love the conversation they have about cannibalism, although I’m pretty sure that the Iroquois didn’t do that. Hannibal’s response to “I’ll be the Chesapeake Ripper now” is great: “Only if you eat me first.” In the context of the conversation, it’s a valid point, but it’s also a kind of witty “fuck you.” Also, apparently, something that I’ve always wanted to hear Mads Mikkelsen say to someone.

As for the whole cross/hanging thing, while the Judas/Jesus dichotomy is interesting, I’m not sure if there’s much to it beyond: “Hey, this is a neat visual and kind of relevant to the character?” Hannibal has his whole God complex, and he did betray Will in a big way. Now that I think of it, maybe that set-up gives credence to the idea that Copycat already knew about Hannibal. Interesting…

Recap of the Recap:

The conflict here is basically a physical manifestation of the conflict that’s been driving the season. Will is trying to orchestrate Hannibal’s downfall from prison, but Dr. Lecter’s support network keeps him safe. Jack and Alana trust Hannibal. What’s more, they like him. These people see Hannibal Lecter as a friend. His person suit has kept him safe so far, but the charade won’t last forever. This is the closest that Will’s gotten to defeating Hannibal. But Gideon was both wrong and right—killing Hannibal isn’t the answer. With Hannibal dies Will’s only chance of clearing his own name.

Right now, Will is at the end of his rope. He’s gone too far this time. The world would be better off without Hannibal Lecter, sure, but the fact that Will is willing to kill by proxy means that he doesn’t care about his own fate anymore. Here’s hoping that he gets out of this “Biblical place” soon.

So what did you guys think? Do you wish that the Copycat Killer had succeeded in killing Hannibal? What are Gideon’s motives for saving both Hannibal’s life and Will’s soul? Who’s the next victim on the list of expendables? Either let me know in the comments, or just think really hard in my general direction. I’ll probably get it.