Hey, Archer fans. James here. The Boss (of this site, not to be confused with Bruce Springsteen). It’s been a while since I wrote about Archer. Last time, I promised you a Reckoning. Well, the time has come. If I’m caught up on these by Monday, I’m buying myself a Talking Heads album. I like that band. The odds are pretty good.

This is, by far, the best episode of season five. In my last recap, I celebrated the return on Competent Archer. Well, “The Rules of Extraction” manages to continue nailing the best parts of the character, and this time without ripping off a better episode!

“The Rules of Extraction” picks up where “Smuggler’s Blues” left off, with Archer and co. on their way to “prison.” And by “prison,” I of course mean “ruthless execution in the jungle.” While Archer, Ray, and Cyril are bickering in the back seat, the cops escorting them get distracted long enough to miss a cow on the road. Unfortunately, the jeep they’re riding in notices the obstruction and takes offense. Soon, our intrepid heroes and their would-be-killers are tumbling down a mountainside in a hilariously punctuated sequence. 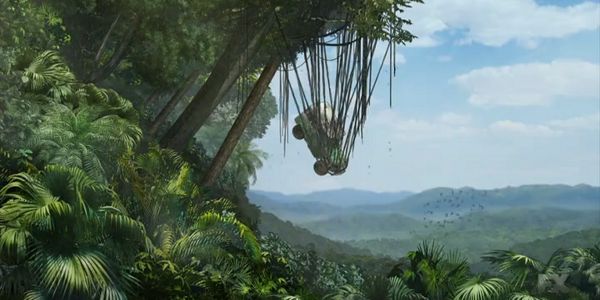 Meanwhile, Mallory is on the verge of a nervous breakdown. She’s broke, her husband has left her, and her son may be dead in Columbia. Lana, being one of the few characters on the show capable of feeling genuine sympathy for another human being, decides to treat Mallory to a spa weekend at the mansion. Cherlene and Pam are the masseuses, so that goes about as well as you’d expect. Also, that’s pretty much their whole storyline for this episode, so I won’t mention them again.

This pretty much sums it up.
Source

Ray is, of course, paralyzed—yet again—in the jeep crash. So instead of walking back through the jungle, Archer and co. end up rafting through a crocodile-infested river with the two injured dirty cops also on the raft. “The Rules of Extraction” manages to bring up Archer’s fear of crocodiles, holy shit, without doing a call-back to a previous episode. Humans rejoice. Lions cuddle with lambs. Angels sing out in a beautiful  chorus. In my head, I mean.

Things go from bad to worse, as they are wont to do, and two enormous crocodiles climb onto the raft and gruesomely devour the two injured cops. Archer douses the raft in gasoline to ward them off, and Ray ends up accidentally setting the whole thing on fire. Archer douses himself and his two colleagues in “crocodile repellant”—gasoline—so that they can swim to shore. Once again, the show has the titular character hitting that right mix of insane and competent. I missed it.

As Archer carries Ray through the jungle, the crippled former-agent berates him for “half-assing this entire cocaine debacle from the get-go.” Archer responds with: “That’s only because I thought it was gonna be way easier!” Classic Archer. The whole conversation is hilarious, and almost makes up for the half-assed season we’ve gotten up until now. Almost. 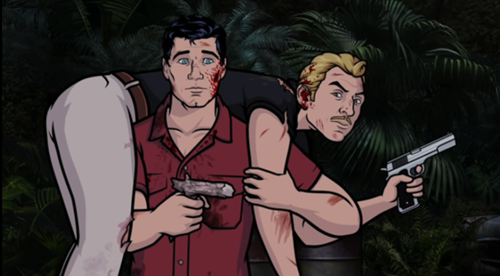 “You think everything’s gonna be easy!” “It almost always is!”
Source

Proving Archer’s point, the gang stumbles upon a group of smugglers loading up a plain with cocaine. They, uh, incapacitate the drug dealers, and Ray lashes out at Archer one more time: “How long will it take you, Archer, to admit you dick around every time we’re in danger, just to screw with everybody, because of your complete, no your utter contempt for your own mortality?” Again, this is the first episode of season five that feels like the writers really “get” their own character.

Archer takes a moment to think, and comes back with: “I mean, yeah, duh.” Satisfied, Ray reveals that he wasn’t paralyzed at all. He just wanted to get Archer to admit that he’s irresponsible. With their only certified pilot back in flying form, the gang heads off into the sunset.

Archer: Now give me the goddamn weapon!

[Cyril gives him the gun]

Cyril: I thought you were going to hit me with it. 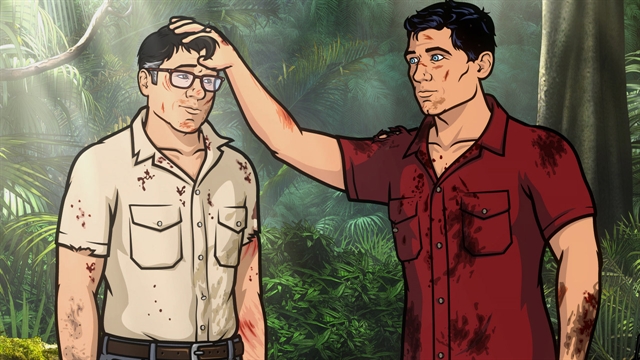 Archer: They eat everything! And fear is their bacon bits.

Archer: I don’t know, Cyril. Maybe deep down, I’m afraid of any apex predator that lived through the KT extinction.

Ray: How long will it take you, Archer, to admit you dick around every time we’re in danger, just to screw with everybody, because of your complete, no your utter contempt for your own mortality?

Seriously, I loved that.

It’s hard to pick, but the jeep crash made me laugh hard both times I watched it. Archer’s “Goddamnit,” punctuated by yet more calamity, is hilarious.

A close second would be that entire conversation between Ray and Archer about the latter’s total irresponsibility in the field. Again, it’s really funny, but it also serves as a reminder of what makes the character work in the first place: He’s immature and completely selfish, but things do usually work out for him, because he’s a competent blowhard.

“The Rules of Extraction” is, by far, the best episode of Archer Vice. It’s a return to form that sees Archer back in his element, overcoming setback after setback through sheer bravado. And, y’know, years of field experience. If I have one complaint, it’s that the storyline back at the mansion feels completely perfunctory. Yeah, Mallory’s had a lot on her plate this season, but they didn’t really do interesting with the whole “spa day” thing.

What did you guys think, way back when this was the most recent episode? Or even now? I’m not picky. Am I being too hard on Archer Vice? Or is this really the best episode of the season? Sound off in the comments.