If I caught you up relatively early this morning (very early if you are on the west coast) and you missed out on some earth-shattering comedy this last calendar year, you’ll thank me for this review. The well known Brit comedy duo of Simon Pegg and Nick Frost–You may know them Shawn of the Dead, Hot Fuzz, and Pau… you know what, we’ll leave that little experiment out–joined together to make the last film of their “Cornetto Trilogy.” It’s thematically linked, rather than chronologically, so you shouldn’t be confused when familiar actors showing up playing brand new characters.

Let’s get this first bit out of the way.. I dislike most modern comedy. The Anchorman movies, Grown Ups 2, and any other manner of lowest common denominator garbage that Hollywood spills out on a regular basis. That said, certain comedies, such as The Big Lebowski, or, in this case, the work of Pegg and Frost speaks to me on a more personal level. Like all comedy, you’ll have to knock yourself down a few rungs on the ladder to enjoy it. Having a few drinks wouldn’t hurt either. But the film is funny and random enough on its own to make it at least an amusing experience for even the most stoic of movie-watchers. 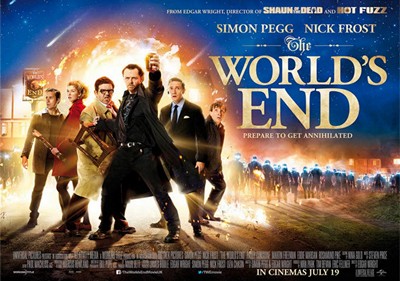 The premise is familiar; five high school friends had a night out on the town after graduation, looking to down a dozen pints over a mile walk through town. Having failed, many years later one of the kids, now a grown adult, still struggles with the fact that high school was the best time of his life. All his friends have gone on to various successful careers; they have grown more mature, given up partying, and become pretty regular sticks in the mud all around. On the other side of the dichotomy, the man-child Gary (Played by Pegg) still shirks any responsibility or maturity. He guilts, bribes and or forces every member of his posse into heading back to their hometown and re-attempting the mile of pints and drunken debauchery. Here is where things get odd, as they often do in Pegg-Frost films. The town is entirely different from how they remember it. No one running the bars seems to remember them, and they have all been changed into generic, run of the mill corporately owned chain establishments. As it turns out, aliens (yes, aliens) have been taking over people in a sort of the Invasion of the Body Snatchers type scenario. Now, it’s up to the five guys to try to fix the town, or die trying.

Most of the strength of this film is in the interactions between its characters. The plot itself, while amusing, is not enough to stand under its own weight. It is the sharp, quick witted comedy that we have come to know out of Britain that provides the flow this experience needs. The characters interact in a believable way, something uncommon for a comedy, and the sort of role reversal with Nick Frost becoming the more responsible and mature of the pair shows good acting versatility by the group. This film, having come out a good 6 years after Hot Fuzz, almost is telling a story about itself. Simon Pegg is proud of his ridiculous comedic movies, and wants to come back to give it one big blowout. Unlike the Golden Mile in the film, however, The World’s End was a good idea and should be a hit with any viewer.