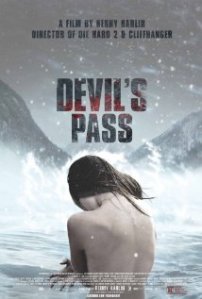 Lesson – I’m adding Russia to my list of dangerous places, right after Australia.

Devil’s Pass is a found-footage style thriller about a Russian expedition team that went missing and the college kids who go to solve the mystery. Naturally, it ends pretty badly. We start with the most irritating of the kids, Holly, explaining how she got a grant to go and do the research, recruiting her friend Jensen for camerawork, some girl named Denise for audio, and two trail guides, one brooding and mysterious, the other rich and mysterious.

After that, it’s a long trudge towards the mountain and through some minor obstacles, etc. Various theories are tossed around regarding why the previous hikers may have vanished, and we learn through a second-hand story that there were 11 bodies found, rather than the 9 reported.

The hike itself promises to be a short one, only two nights, about three days. After the first night, some weirdness in the way of large, bare, footprints that appear and disappear randomly. The second encampment bears the discovery of a bunker, complete with a frozen-shut door.

Honestly, I’ll say that there was a fair amount of suspense in this movie. These were mostly moments were I sat in front of the screen, somewhat cowering, and said things like, ‘If something pops out at me I will be MAD.’ That being said, there were a bunch of red herrings, which is kind of refreshing in a found-footage film. This included weird dogs, military conspiracies, an odd testimony or two, alien theories, and the oddity of finding a tongue in a weather station. Like, a tongue? What?

Things escalate on the second night, particularly due to an avalanche that reeks of conspiracy, which takes Denise’s life and JP’s leg. Someone comes to help them, but the team quickly realizes that they aren’t a rescue team so much as a cleanup team.

I warn, because the twist/ending is fairly decent, and I think I would be sad if it was ruined for me beforehand. But! I have to talk about it.

Once Holly/Jensen/Hausen are inside the bunker, ‘safe’ from the cleanup crew, they are able to switch on power and explore a little. Hausen has been shot in the arm, which for some reason affects his mobility, and they leave him sitting down to explore further. The bunker appears to be some kind of lab, and furthermore, has information about the Eldritch experiment. For those of us not so up-to-date on our American history, the Eldritch experiment dealt with teleportation.

This is where the weirdness sets in. And it sets in quick. The creatures are scary at first, but then there is over-exposure and you get kinda numb to them.

Given the costuming oddities, these may have been stand-ins, or possibly were going to be used but tossed in favor of the CGI. I super wish they had left in the people, it’s WAY creepier!

And that’s all the spoilers for now, folks!

All in all, a pretty decent movie, with decent scares and sizable suspense albeit with some stagnant and somewhat boring college kids and a fairly slow middle followed by a rushed third act.