Oscar season! Oh my goodness, remember last year? Argo, Lincoln, Les Mis, Silver Linings Playbook, Beasts of the Southern Wild, Life of Pi, Zero Dark Thirty, Django Unchained, Amour… others… that didn’t get nominated for Best Picture. Ah… good times. Plus, so many links in this article! Ten, I guess. I’ll toss in a few more, probably. So, what does Oscar season 2013 hold for us? Well, we did Gravity, and that should win a few awards, and I reviewed the critically acclaimed films Prisoners and Mud, which will probably both be forgotten. Now, as this rambling, unnecessary introductory paragraph approaches its conclusion, I approach my point: 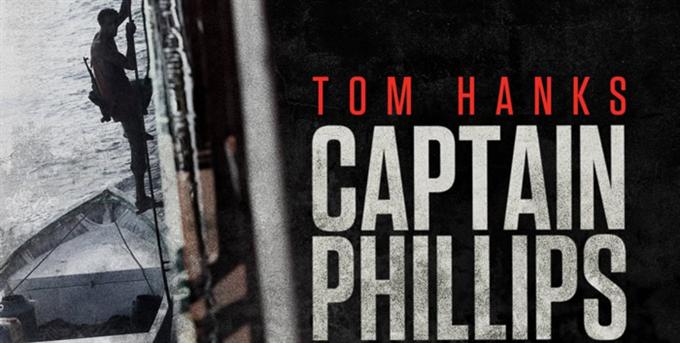 The Plot: Captain Richard Phillips (Tom Hanks) is an ordinary American and captain of a civilian freighter transporting goods around the Horn of Africa. Of course, his route takes him right past the Land of Pirates (Somalia, sadly, not Treasure Island), and before too long he becomes the target of a group of pirates, led by Captain Muse (Barkhad Abdi). Phillips and his crew engage in an intense game of wits with the pirates, first to keep them off the ship and then, once that fails, to keep everyone alive. This plotline remains calculated and cerebral until Phillips alone is taken hostage and held on a lifeboat, and that is when people start acting from emotional/moral positions, and we really get a chance to view their human psyches.

This film is BASED ON A TRUE STORY, which means that nothing I say in this review is a spoiler, because most of it happened in REAL LIFE, and if you don’t already know it you can look it up on the INTERNET. So, while the “based on a true story” tag is a nice little boost for the Oscar run and drags people to the movies a bit more, it also puts a little extra burden on the director (Paul Greengrass of the Bourne series and United 93), the writer (Billy Ray of The Hunger Games), and the actors (aforementioned). Not only do they owe a lot of respect to the actual people involved in the story, who in this case are still alive and well (mostly), but they also have to try to create a taught, suspenseful, emotionally draining thriller even though everyone in the audience already knows what happens and how it goes down. They also have to avoid the pitfall of becoming a history report. When you go see Captain Phillips you want something that you can’t get from picking up a newspaper. 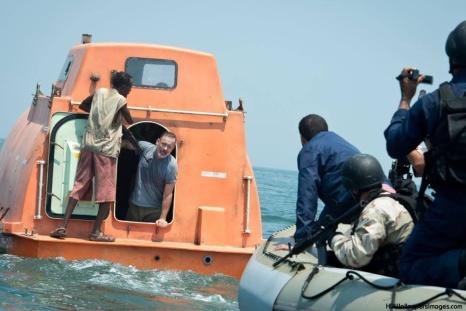 Columbia Pictures
Ha! What a weird-looking boat. There’s something you’d never see in a newspaper.

And now, I imagine, dear reader(s), you’re at home in comfort, perhaps wrapped up in a blanket and sipping a cup of tea, hoping to enjoy the latest post from what is undoubtedly your favorite film review site, but suddenly you feel your day has been thrown off. You finished the last paragraph there and you’re wondering two things: first, did Greengrass manage to solve all those problems? And second, why is this jerk of a writer teasing me with another superfluous paragraph? I can answer one of those questions for you.

Captain Phillips is an incredibly gripping and intense film, despite what we know about how the situation turns out. How is this created? There are a few ways. First, gotta give props to the script. Ray took a look at the characters (and the book Phillips wrote about what happened) and divided the story into two distinct halves. Initially, there’s a good deal of buildup. He takes time to introduce us to Phillips, Muse, and other characters, and he tours us around the ship. We see all the pieces as they’re set up on the proverbial board. Because we know the game, we know the moves that each piece is capable of making, and we know how each player is going to want to achieve his victory. Once the pirates get aboard the ship, things get very interesting. Every character does the exact smartest thing for him to do at any given moment. This means Phillips, his crew, and, most importantly, the pirates are all trying to outwit everyone else. Of course, very few of these undeniably smart decisions complement each other, so despite how clever everyone’s being, things just keep getting more difficult and suspenseful. 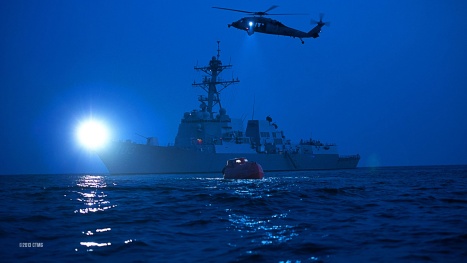 Columbia Pictures
Of course, Phillips trumps everyone by calling in the US Navy.

The second thing Ray’s script excels at is exploring human characters. Obviously, Phillips is a familiar American everyman set in an extraordinary situation of extreme duress, and Tom Hanks is really at his best in performing this role. I know that saying Tom Hanks gave a good performance is sort of moot at this point, but I was just really impressed by him. He’ll get nominated for the Oscar and I wouldn’t be shocked if he won.

Muse, though, is the more intriguing character in many ways, at least in terms of how the screenplay treats him. Ray doesn’t approach the subject with any pretense. The pirates are the bad guys. There’s no doubt about that. They’re humanized, but not overly sympathetic. A lot of critics felt that the pirates weren’t sympathetic enough, but I think they’re viewing the film through the lens of White Guilt (which is just a contemporary reordering of the White Man’s Burden). They don’t want to condemn the pirates; they want to coddle them and teach them how to be peaceful and happy. Phillips, the character, wants this, too. He makes several attempts to reach out to his captors, but of course, he fails. My favorite moment in the film is a brief two-line exchange in which Phillips addresses Muse, saying, “There must be more to life than fishing and kidnapping people,” and Muse just responds, “Maybe in America.” That’s all the development we really need. Phillips, like many Westerners, wants to treat Muse as an American, but at first fails to see that, oddly enough, America and Somalia are different countries. Barkhad Abdi as Muse gives an incredible performance, especially considering that this is his first ever role and he’s had no training whatsoever. He acts on Hanks’ level.

Columbia Pictures
Heh, do you know what this reminds me of?

Overall, Captain Phillips is an excellent film. There are things to criticize and a lot of elements worth mentioning that I really can’t get into. Greengrass’ direction, which is similar to the Bourne movies, though considerably easier to watch, nicely serves the story, but the truly noteworthy aspects are the screenplay and the expert performances from Hanks and Abdi. I’ve decided that Prisoners came out too early to get the Oscar attention it deserves, but it’ll be interesting to see how Captain Phillips fairs against Gravity. Maybe someday 12 Years a Slave will come to a theater near me and I can review that. Otherwise, we wait patiently for Her, American Hustle, Inside Llewyn Davis, Saving Mr. Banks, and, oh yeah, Martin Scorsese has another movie coming out. Maybe Leo will get a nomination this year.