Well, here we are. The first week of January is almost over, many schools are back in session, and soon people will stop bothering you about your New Year’s resolutions. Won’t that be sweet? I myself try not to get too bogged down with resolutions. I guess I want to watch about the same number of movies this year as last year. Last year I watched 184 movies, which was a great improvement upon the 157 I saw in 2011. I’m off to a slow start so far, so I’m looking back into 2012 for this week’s review. How far back? All the way to December 31 when I watched… 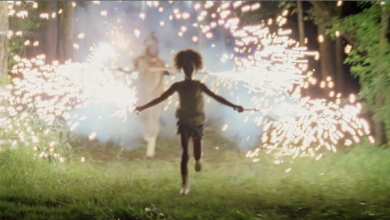 Fox Searchlight
Isn’t that a pretty shot?
Ed. note: Beasts of the Southern Wild on Amazon

The Plot: Hushpuppy (Quvenzhané Wallis) is a six-year-old girl who lives with her father, Wink (Dwight Henry), on a small island called the Bathtub, located on the wrong side of the levy near what is probably New Orleans, or N’awlins, if you will. One day, the polar icecaps melt, raising the waters around the Bathtub over night, and simultaneously releasing massive boar-like creatures called aurochs, which had been frozen since the Ice Age. Hushpuppy must struggle to survive against nature, her father’s rage issues, and the crushing realization of his failing health. What unfolds is a powerful tale about love and family.

Remember just a moment ago when you read that bit about the polar icecaps melting and the aurochs? That didn’t actually happen. What really happens is that a hurricane hits, inflicting a kind of destruction that Hushpuppy cannot fully understand. Since we’re following the story through her eyes, though, we view everything with the logic of a six-year-old. Hushpuppy pieces together her truth from scraps of information she picks up from the adults around her. The enchanted fantasy of the child’s mind merging with the harsh reality at hand is called magic realism. Please note that the term is in bold, and so will appear on next week’s quiz.

Fox Searchlight
This kind of thing happens all the time in LA.

This technique actually works very well for the film. Given the subject matter, it would not have been as affective to be straight fantasy or straight realism. A fantasy could have been too preoccupied with its magic to properly develop the characters or fully address the weight of the situation. A strictly realist film would have been obnoxiously, ostentatiously bleak and preachy. In blending the two we strike a balance between the wonder and the gravity.

Furthermore, the fantasy elements are used with utmost responsibility on the part of writer/director Benh Zeitlin, here making his first full-length feature film. Fantasy and sci-fi elements are like CGI. When used properly, they enhance the spectacle, but are used primarily to facilitate character development. When used badly, they detract. The worst crime a writer of fantasy or sci-fi can commit is creating a complex fictional world filled with mechanisms and machinations that are completely fantastical, and then impregnate that world with bland characters so that he/she/it has a vehicle with which to explore his/her/its world. Here’s a friendly tip to all you writers out there: NEVER use characters to develop a setting. ALWAYS use setting to develop characters. People are more important. Zeitlin is clearly aware of this rule. Despite the title, the focus of the film is not the aurochs. In fact, the aurochs are hardly in it. We’re not in it to explore what they are, where they’re from, or how they work. That’s not the point of Hushpuppy’s struggle. Rather, the aurochs exist only to push along her conflicts and help her come to a meaningful resolution. Ultimately, though, the story is about the relationship between a young girl and her father; it’s a story about Hushpuppy learning how to take care of herself after her father inevitably dies. 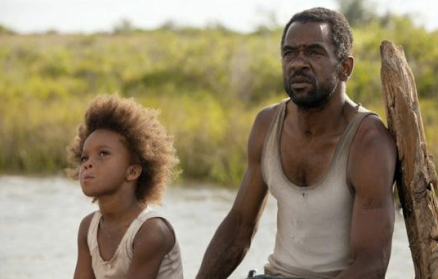 Fox Searchlight
How about a picture to break up all this text?

That’s kind of a heavy emotional theme, though, and requires a fair amount of nuance and power in a performance. You may have heard, if you pay attention to other film review sites, that Quvenzhané Wallis gives a very stirring performance in this movie. That’s true. She nails all the emotion and subtlety that the film requires, which is especially impressive considering that she was five years old when the production began. Not only was this her first role, but she had no training as an actress before. In fact, none of the actors did. Rather than casting professionals, the director opted to hire locals from the N’awlins area. He imagined that someone like, for instance, Dwight Henry (who play’s Hushpuppy’s father) would better convey the raw emotion of the character because he is, in real life, a poor black man who survived Hurricane Katrina. This is a risky move to make as a filmmaker. Either you get exactly what you want, or it’s really, really obvious that your actors have never acted before. Fortunately for Zeitlin, his actors nail their performances, and even more fortunately for Wallis and Henry, the world at large took notice. They both have acting gigs up and coming, including major roles in Twelve Years a Slave, the next film by director Steve McQueen (Hunger, Shame, not Bullitt and The Great Escape). Considering how nigh impossible it is for people like that to break into Hollywood, this comes as a refreshingly rare success story. 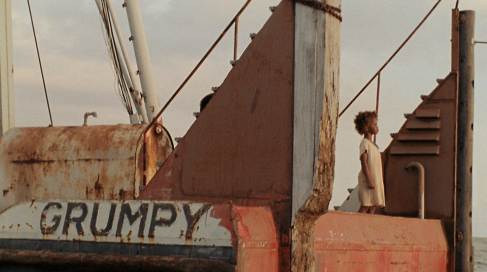 Fox Searchlight
Man, there’s all sorts of emotion in this movie.

I have no real valid complaints about this movie, other than the fact that Zeitlin was too cheap to afford a tripod. The camera work isn’t overly shaky, but it was shaky enough to irritate me, but I am easily irritated by that kind of thing. It’s not severe enough to harm the movie in any real way, though. Overall, Beasts of the Southern Wild is a beautiful written, artistically staged, perfectly acted film, and I very much look forward to the burgeoning careers of Zeitlin, Wallis, and Henry.

3 thoughts on “Second Breakfast: Beasts of the Southern Wild”