Downton Abbey? James, do you even know what a movie critic is? Ha ha, disembodied voice. Ha. Ha.

For those of you wondering what I’m doing reviewing a TV show, some exposition: I work at a video store frequented by well-off white people. As such, Downton Abbey rents like crack, if crack were a thing that you could rent. I realize that isn’t a perfect metaphor, but I’m also this blog’s editor so it’s staying in there. (Ed note: It’s not a metaphor, it’s a simile. You tool.)

Question: how long can you deal crack without trying any for yourself? Answer: about five months, apparently. I held out for a while because, I don’t know, it just seems like one of those shows where everyone’s a dick, you know? Sort of like Mad Men’s stuffy English cousin.

So who’s ready to try some crack?

The Premise: Set in 1912, the show follows the lives of the wealthy Crawley family and their many servants at the family estate, Downton Abbey. When the heir to the family fortune dies aboard the Titanic, the Crawleys struggle to keep their money and hold on to the estate even as ownership goes to a distant cousin (a solicitor in Manchester, can you imagine?). Meanwhile, the servants mire themselves in equally petty struggles for power and prestige.

I guess that this is pretty much what I’d been led to expect. Production values are high, and the cast is excellent. The show’s multiple plotlines are juggled efficiently. They’re easy enough to follow, but there’s always something going on. It’s kind of impressive that the show is able to handle so many characters and still make everyone feel distinct. All told, there are like twenty people in the main cast, and while I cannot remember more than a few of their names, I could probably tell you which petty thing they were obsessing over if you pointed them out to me. Of the eighteen people in this poster, maybe four and a half of them are likeable:

Who knew there were so many different types of Greedy Humorless Asshole in 1912 England?

That having been said, it doesn’t matter that most of the characters are dicks. Why? I thought you liked nice people. I do, but that’s irrelevant in this case because:

A) Seriously, why would you watch a show about a bunch of rich people being nice to each other? Even Jane Austen books have some jerks in them.

B) Something something message about a failing class system?

Okay, it’s definitely more A than B, but still. If you don’t want to get your Brit Fix by watching a bunch of conniving bastards screw each other over for money and power, then watch some Doctor Who, you nerd.

We’re living in a Golden Age of antiheroes. Unlikeable protagonists are more “complex.” Even in the case of Downton Abbey, where the multiple plotlines are used to disguise a rather simplistic condemnation of, yes, a failing class system, we can kind of pretend that everyone’s complete and utter dickishness makes them more “interesting.” 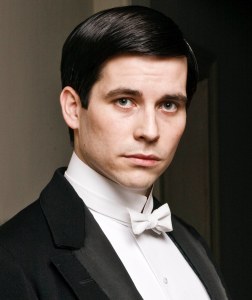 Except for Thomas. F*ck Thomas.

At the end of the day, Downton Abbey isn’t much more than a really well-made soap opera. There’s nothing wrong with that. In fact, it probably explains why the show is so addictive for so many people. There’s enough likeable characters (four and a half) that we have people to root for, but it’s also kind of fun watching everyone scheme and connive and, oh, I don’t know, conspire. Not many people get to be devious in real life, so it’s weirdly satisfying to watch a bunch of uptight people in fancy waistcoats be really awful to each other over cigars and brandy.

Could I stand to do some more Downton Abbey? Yeah, I guess. I didn’t get the same high that everyone else did, but they say that you never do with your first hit. Who knows, maybe I’ll try it again at a party, or to impress a girl. For now, I think I’ll just stick with Jeeves and Wooster for my upper-class English antics of the 1900s fix. That’s much more my cup of tea.

One thought on “Netflix Review: I Finally Cave and Try Some ‘Downton Abbey’”