Baddie – I mean, cannibalism is wrong.

Over 50 movies and television shows later, it’s my one-year anniversary here at Rooster Illusion! I’m always super ridiculously appreciative of my readers – so thank YOU (and James, best boss evah) for letting me indulge this silly obsession every week.

Incidentally, Happy Octoberween! This is the same stuff I pump out every week, so, uh, enjoy it extra during October? Maybe I’ll only do Australian films. Yeah.

If you read this column enough, you know that I love Australian horror movies, probably the best out of the ‘international’ horror films that I watch. Dying Breed is no exception, and was a fairly compelling little film.

As with most of the Australian films I’ve seen – despite the fact that everything wants to kill you in the wild, that simply isn’t enough for the Aussies. No, they have to introduce something else. In this case, cannibal hillbillies in Tasmania. The basic premise is that a woman’s sister went looking for the thought-extinct Tasmanian tiger and drowned ‘mysteriously’. With no teeth. Eight years later, the sister goes to look for the same tiger, and maybe shed some light on the death of her sister. At the same time, there’s a Tasmanian legend about ‘The Pieman’, an escaped convict found with human flesh in his pockets and thus hanged for cannibalism. Naturally, when they end up in a sketchy little town with some…’questionable’ locals, suspicions arise.

I’ve seen Sweeney Todd a few times in various forms, and let me be the first to say that meat pie is always people. Always.

There’s a lot of similarities between Dying Breed and Primal, a movie I reviewed a few months back, such as the presence of a tunnel, and weird pregnancies, sassy Australian teens, dead rabbits, the works. The most notable difference is that it’s a parasite that turns the happy campers (grad students!) into cannibals/monsters in Primal, not a weird gene or something. 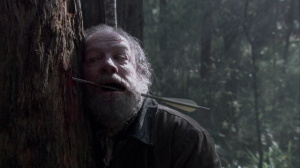 The plot is pretty simple, where the cannibalistic community is trying to keep their gene pool from becoming too in-bred by capturing female tourists and impregnating them. They also inexplicably remove the woman’s teeth. Not sure what that’s about.

So, for me, this movie had a lot of goodness. Compelling story line, solid acting, really great prosthetics work, etc. Like, super good prosthetics work, including a pretty decent hanging corpse. Had a good mix of scares and tensions with a good dose of heebie jeebies (because, y’know, cannibals). Good dose of mystery, but, maybe a little -too- vague? As many horror movies do, this one does suffer from a tiny case of the ‘convoluted plot that doesn’t really resolve anything’-itis. There’s a scene on a bridge after some dashing heroics, and the heroine is confronted with the ‘creature’ (an old cannibal man) and his slightly-younger assistant. Her knee is injured, so she can’t really run. It’s a strange conclusion to a weird chase scene, and it is by no means the end of the film. It is, however, a good example of the seeming lack-of-focus that happens as the characters start to digest what’s actually going on in this sleepy Tasmanian town.

Not a perfect film, but definitely an enjoyable little movie. On a side note, the cover that I picked for this post is not the cover on Netflix – which features an eyeball in a martini glass and the tagline, “Every body has a different taste.” Needless to say, I was not quite ready for a Tasmanian bush-adventure. Incidentally, the sister (main heroine) is Irish, and my poor American brain spent a lot of time flipping between Australian, Irish and Tasmanian accents.