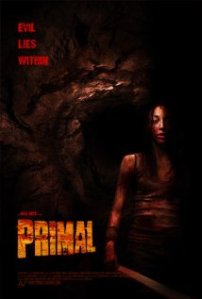 Baddie – A wendigo! A tunnel! A rabbit! A leech! The water! The tunnel again!

Lesson – Seriously, the Outback will MESS you UP.

Oh hey! An Australian movie! Readers, you may remember the other Australian movie I reviewed, Black Water, and how much I really enjoyed that movie. In the past James made me watch Wolf Creek, which is actually a really good, scary torture film, so my track record with Australian horror is pretty good. I had high hopes for Primal.

At first blush, this is a Wendigo film. It’s Aboriginal in origin, and I’ll admit that I don’t know a lot about Aboriginal culture, so as far as I’m concerned, sure. Then I kinda thought it was mutant leeches, because of the teeth thing. Wait, now the cave digests things? What? Also, leeches. This film has a lot going on. A lot of red herrings. At first, I was annoyed. Then I was glad. It’s distracting, and it keeps you on your toes.

Primal Films
This is less than 3 minutes in.

One of the best parts of this film is that bad things keep happening despite best efforts put forth by the group. There is relative teamwork, somewhat good plans, logical execution of them and foresight. They learn, quickly, and they adapt to the threat. The threat doesn’t adapt, because it doesn’t have to. I thought this aspect of the film was really clever.

Warren is the best character. “F*** you, Mister Branch.” and also “We have NO PLAN. We’ve got Chad’s sabretoothed girlfriend up in a tree!” He adlibs on guitar. Delightful.

“Wake up, and smell the viscera, Chad.” – PhD student (Dace) also has some great one-liners. Actually, I have no complaints about the dialogue in this movie.

And while we’re talking about Dace (What the heck kinda name is Dace?), the reason they’re out in the bush is because he’s planning on documenting some cave paintings for his thesis. He gets understandably distraught when his plans go to hell. I’m writing a thesis. I probably would have gotten equally pissy. On another hilarious thesis joke, they make the same wrong assumption based on results. Remember, correlation != causation. Always make sure your sample size > 30, or your results might contain bias.

Sorry for spoilers, but I have to talk about the monsters. As I mentioned, there are a lot of distractors, and honestly the movie ends without the audience really knowing what’s going on or what the monster is exactly. Mel runs around with these great prosthetic teeth for most of the movie, but she also sacrifices parts of her kills to the cave. The creatures are indeed primal, afraid of fire, and there’s a really uncomfortable scene where Dace sniffs around Mel while they’re feeding and…dry humps her. It’s a very animalistic thing, and it’s really awkward to observe and you just don’t want to see people act like that. Also, the snarls and growls of the creatures are pretty unnerving and well edited.

Overall, I thought this film was a soundtrack and some CGI away from a pretty legit movie. The cinematography is really beautiful the whole time, and as I mentioned, the sound editing is stellar. The writing is great, the concept is decent (until the end) and really the only thing impeding the seriousness are the heavy-metal fight sequences and the really awkwardly executed CGI. The physical effects were really cool. There’s a lot of neck ripping in this movie. Also, check out that aspect ratio! I don’t know as much about film stuff as my writing counterparts, so someone tell me what that is.

This was a decent thing, all in all. It has some decent entertainment value. I watched part of it with a friend of mine (Trevorrrrr!), and we speculated/guessed/giggled most of the time. I still have no idea what the creature was or how it works. Tentacles in a cave, rapidly pregnant women, weird water, acidic bugs? It’s like the precursor to Slither.