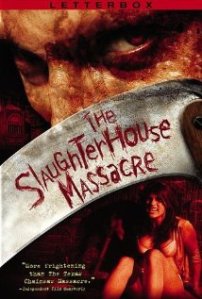 4 What Its Worth Inc.

Also, tune in next week, as I’ll be reviewing the new ‘Riddick’ movie, and I’m beyond excited!

So it’s the first week of classes here, and as a grad student, this means diddly squat for me. I was on campus all summer, doing research, and I have no classes. Just. Research. Really all this week meant was that all of a sudden there were a zillion more people on campus. In either case, I tried to find a ‘school’ related film on Netflix, and arrived at The Slaughterhouse Massacre.

I haven’t been this infuriated by a film in a long time. I was hopeful that it would be a low-budget, delightfully gory, slasher flick. Well, it’s low-budget all right.

Now, I did not go to many ‘frat’ type parties in my college-going days. So I’m not really the leading authority on what goes on at said parties. I’m willing to bet that it’s not like the party in The Slaughterhouse Massacre which was a sad attempt at exposition with some senseless lesbian groping. A lot of groping. Drinking out of clear cups, weird dialogue, and Justin, the football star, talking about how good he is at football. Yeah…sounds like a fun party. 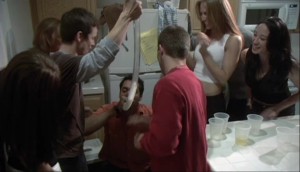 4 What Its Worth Inc.
No party I went to ever. #nerd 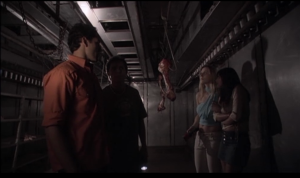 4 What Its Worth Inc.

Now, speaking of the exposition, the plot of this movie is thus: 10 whole years ago, a slaughterhouse worker was accused of murder/rape because he was literally the closest living being to said incident, but not convicted. Some kids break in to the slaughterhosue and try and kill him, but fail. Later that same night, two lovebirds break in and try and have sex there. The girl actually kills him. On the anniversary of his death, this apparently innocent man rises up and, er, I guess kills people. His name is Sickle, so naturally, he carries a sickle. So, just saying, legends take more than 10 years. Thanks. Something that happened 10 years ago is recent history.

About half an hour into this movie, I’ve about had it. Unfortunately for me, there’s an hour left. The production value, even for low budget, is shoddy. There are shot inconsistencies, dialogue inconsistencies, pointless dialogue. Some basic logic gets ignored, like a tub of water that’s been full for 10 whole years. There was some wasted plot potential with the fresh meat on hooks when the kids first arrive at the slaughterhouse, but it apparently has nothing to do with anything. It takes 51 minutes to achieve a full on-screen death, so, there’s that. It’s accomplished with a pun. “I’ve gotta split.” UGH.

There’s a bunch of stuff that either isn’t necessary or doesn’t fit into the plot. For example, we get a lot of shots of the stoner (affectionately named ‘Stoner’) sitting in his car. Smoking. Great. One of the girls gets…cut? At some point? I didn’t see it happen. “Dude, we can’t stay here, she’s lost a lot of blood.” From…from what? There’s a tourniquet on her leg, blood on the ground after she sits down, but her pants are blood-less. I wish I could touch on all the pointless material, but we’d be here forever.

4 What Its Worth Inc.
Gratuitous underwear!

Also, I know this is Texas, but why is there a gun in the truck? Also, ‘under the bed’ sequences work best from under the bed. It makes zero sense for a killer to trap himself under a truck for a similar effect. The killer, by the by, is played by the director, and sounds like Buffalo Bill speaking through a cup. He does manage to slice a torso perfectly at the waist, sparing the pair of jeans and the shirt from carnage. With a sickle. Must be the world’s best sickle. 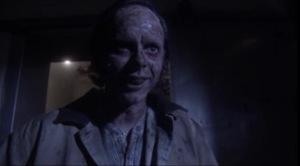 4 What Its Worth Inc.
Pictured: Maybe a killer?

So, basically, this is a dark (as in the lighting) movie that doesn’t make a whole lot of sense, but isn’t bloody enough to be entertaining. It might be sort of self-parodying, but there isn’t enough consistency for me to buy it. It also isn’t funny. It’s like that guy you know who is terrible at telling stories, but for some reason you sit through the entire thing, no matter how long it takes. 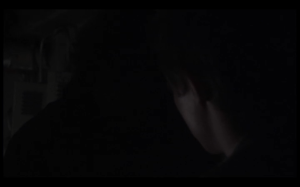 4 What Its Worth Inc.
Most of the movie looked like this.

One thought on “SciFridays: “The Slaughterhouse Massacre” (2005)”