Due to the disastrous unavailability of The Purge throughout the entire North Country, I was obliged instead to watch this gem;brought to you by relatively unknown director Mark Tonderai. It ran on a modest budget, much of which was likely used on paying well-known actresses Elizabeth Shue and Jennifer Lawrence, but does not detract from the simple country attractiveness of the setting. For a horror film, it’s not a bad cast, and the acting is probably the best aspect of the 90 minute feature. 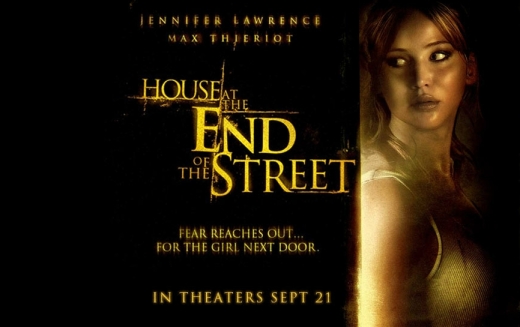 For a bit of background information, I’ll provide the early plot. A divorced mother and her teenage daughter (Played by Shue and Lawrence, respectively) move into a new, large neighborhood together. They get a magnificent house at a discounted rate, because there was a horrific murder in the house not too far from their own. (Sound familiar?) The belief is that, while the small daughter of the family that lived in that house killed her parents and disappeared, the brother of the family, who was away at the time, had come back to inhabit it. His reclusive ways irk the affluent neighbors, who complain that he has brought all of their property values down.

What follows is far too much time spent on a cliche’d teenage romance story mixed in with a little high school drama for aftertaste. If the filmmakers were going for the beloved 16-20 female demographic, they might have landed the punch, but unfortunately no other demographic shares even remotely the same interests, so here we are with a film for niche audiences. The characters exhibit such strong and single-layered personality characteristics that they become mere caricatures. This will pull the viewer so far away from the film; or caring about its protagonist that when the twist comes along, they may not even feel shocked by it.

It was much easier to find photos of Lawrence than anyone else in this film.

The reason I previously brought up the director is because I felt he did a pretty good job. The film had plenty of shots that are of the creativity and quality one might expect of a fresh director trying to prove himself in the industry on a limited budget; and the aesthetics of the film are never a distraction, at the very worst. Unfortunately, the story doesn’t match the quality of the shooting, or the acting. You can only do so much with bad writing. If you’re a 16-20 year old who loves high-school-reclamation-forbidden-romance stories, this might be your type of horror. If not, stay far away.