Lesson – I don’t know. This movie is better than Ambien.

Sorry I’m late. I’m on vacation, sortof. One of the perks of this job is, since I don’t get paid, I write reviews whenever I WANT, son. And by that I mean promptly for Fridays unless I get distracted.

This movie (Also called ‘Forest of the Damned’) starts with the laziest panicking I’ve ever seen. Also, just as an FYI the ‘nymphs’ or whatever are completely naked, so…full frontal nudity abound. Yippee. This movie also appears to star several young British people who apparently hate each other.

So, ‘Demonic’ features some pretty lackluster dialogue, and the plot seems forced. The group is alerted to the dangers of the ‘fallen angels’ in the forest (who appear to be succubi) by a man at a gas station who literally just pushes some girl against the van and screams in her face. Given production value and nudity, I think I’ve come across a pseudo-porno. Once again…Yippee.

There’s a dash of Blair Witch style shooting, in particular of some girl we haven’t been introduced to yet. All we know is she’s lost, and crying, and wearing way too much mascara. It’s only after we regain color that we realize it’s the panic-less girl from the beginning, who’s now…wearing a necklace.

25 minutes into this movie and I am bored. One nymph/angel/succubi has torn out a throat, sortof. There’s an angry British girl and her brother’s friends, and no working cellphones. Also bird noises, which are apparently strange enough to be concerning. They sound like birds to me.

Radio London Films
Also this movie is in 2005, which apparently the 90’s in English time.

Why do men think that getting naked and swimming with a bunch of naked women is a good plan? If they didn’t invite you, showing up naked is probably not your best bet. Also at least one of the nymphs looks so unhappy to be swimming, it’s kind of hilarious. 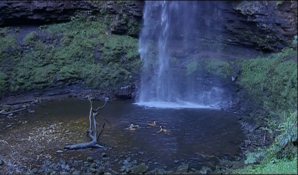 Radio London Films
This is all I can legally show you.

So, something that you may not know is that Europe, on the whole, tends to censor violence much more than sex. There are tons of studies why this is better or worse, but in the case of this movie, it means ‘tons of nudity and no dying.’ However- remember that thing last week, with my whole ‘eating people’ squeamish deal? Yeah. I can’t catch a break.

Radio London Films
Even one of the bad guys is apathetic.

Speaking of production value -someone seems to have forgotten that dried blood is darker than wet blood and opted to ‘spray’ paint blood all over the dilapidated house they find. The girl (who’s name I don’t care about) seems unconcerned about the plethora of blood around and continues to search. People in this movie are just so darn lackadaisical. There are a lot of wasted opportunities for tension, too. Shots that could definitely be high-drama and just fall flat because they aren’t utilized, or there’s a sloppy cutaway. It makes this film feel very student-esque.

Radio London Films
If your prosthetic head is this bad, don’t linger the shot.

Aww, I know. Editing is hard! Especially interiors. And doors. And walking. Walking through doors is especially tricky. Why did that girl and her boy get kidnapped? Nobody knows. Yayyy shooting out of sequence! Blood spatter ought to be consistant, folks. Especially when it’s covering someone’s face. Cuts should probably not jump from one side of the face to the other, either.

However – the last half hour of the movie is okay. There’s more violence, and they start to intermittently fast forward the nymphs, which makes their movements shaky and less human. That’s a nice touch. I did, however, think one of the characters was smart until she cut her wrist to lubricate a shackle off. I…am not sure that was a great plan. Flash forward to a ‘year later’, the remaining survivor has apparently been living in the woods the whole time, and her cut has never healed.

And lastly, none of the kissing in this movie looks fun. 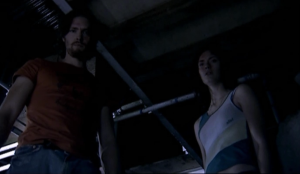 Radio London Films
Did we just kill a guy? /yawn

If nothing else, this movie poses an important question: