Sorry for the lateness of the post this week – again, grad school. It’s a hell of a thing. 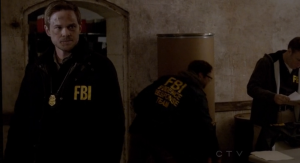 Well, this week they’re doing that neat thing where they flip society on its head. Now it’s Claire that has to earn the trust with Joe? Funny how the upper hand can influence things. Molly cares for Ryan…so that she can kill him later. All neat/weird little role reversals. Joe has writer’s block. (I know the feeling…) 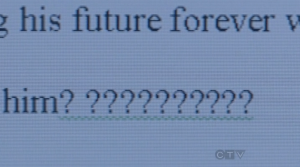 So this week involved a lot of characterization and backstories and stuff. Yippee skippee. I guess we get to learn a little about Joe, and a little about Ryan, and a little bit about Jacob. Jacob the ‘Golden Boy’. Having privileges and a successful dad doesn’t make your life ‘easy,’ by the by, Fox. Maybe ‘easier’ in some regards, but pressure filled WASP-y families can be pressure cookers for psychopaths too.

I guess Emma is going to try and talk to Claire. She really has no reason to do this unless she really cared about Joey, OR she wants to rub the whole ‘I slept with your husband’ thing in. I think the latter is more likely. Also, why is Claire wearing so much eyeliner all of a sudden?

The catfight we all knew was coming.

You know how Joe and Roderick are gonna fight? That…that is escalating quickly. For those of you that don’t know, “The Following” has already been slated for another 15 episodes in a second season. So, somehow, this isn’t actually going to end with episode 15. (Unless they pull an American Horror Story and change the plot around? I don’t know.) However, there is going to be a blow-up in the next four episodes, and it’s gonna be…epic. Hopefully.

So I guess Joe has a plan. A plan no one knows about except Joe. And now Claire. I see…It’s also entirely possible that Joe is unraveling. Roderick isn’t terribly strong though either, so I think they’ll hang onto Joe a little bit. Pet peeve, but in the above scene, Joe pushes into Westie’s cut, and it has the most gratuitous ‘squelch’ noise I’ve ever heard. The foley artists redeem themselves later by adding reloading noises to Ryan’s gun while he’s moving, even if he doesn’t appear to be reloading his gun.

OH HANG ON A HOT SECOND. Ryan Hardy, you murderous sunnuva…Maybe this can still be interesting.

2 thoughts on “Rooster Recap: “The Following” Episode 12: The Curse”