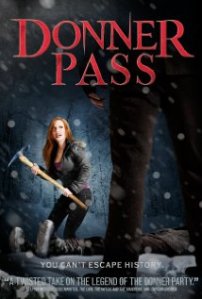 And now for something completely different! A cross-over historical fiction + wendigo myth! What!? Is it Christmas already??

At first glimmer, Donner Pass is pretty in the same way as The Burrowers. Historical horror tends to have that same feeling, no matter the art direction.

It is, however, the very first spurt of blood out of someone’s neck that reminds the viewer what kind of movie they’re in.

Donner Pass doesn’t really pull any punches, and the simplicity works for the most part. However, the complicated bits are…complicated.  The mythos is a bit convoluted, but from what I gather, Donner lured the party to the ‘Donner’ pass and systemically killed them because he had ‘the hunger’. A child survives, and basically does the same, over the course of 100 years.  ‘The hunger’ is passed by simply ingesting human while that human is alive.  Now, I think that this has to happen in ‘Donner Country’, because otherwise people accidentally ingesting blood could be a real issue. I opt to go with the ‘Wendigo’ myth and not zombies because of the specific cannibal = monster aspect. 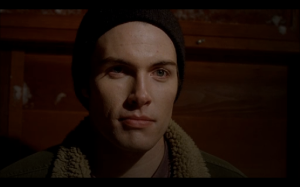 Constellation
“Yes, a wendigo. I concur.” Thanks, Derek!

Donner Pass is similar to Grizzly Rage, where the filmmakers grapple with their own morals and make sure that everyone that dies is a douchebag and/or deserves it. I love when my thoughts line up with the dialogue. That means the writers did a good job with their exposition and predictive explanations. For this movie, the obligatory awful girl is Nicole. I wondered to myself, Why is there always a horrible girl? Why does every group of friends have one of these? The next line of dialogue was something like, “Nicole is such a b*tch. I don’t know why Kayley puts up with her, even if she is her cousin.” Ohhhhhh. Thanks, writers!

But seriously, these high school kids drink, galavant, play stupid frat-esque games, date rape each other, seek revenge on each other, bully, etc. There’s a scene where two of them gang up on their ‘friend’, bludgeon him in the head, drag him outside, bleeding but alive, as bait for the cannibal (Donner). Heavy stuff.

The group dynamic was pretty good though, overall. From what I understand, all these actors are relatively unknown, but they did a decent job of it.  It definitely felt a little forced at times, but the written dialogue was natural for the most part.  I found the Draco/Crabbe/Goyle vibe between Derrek/AJ/Brody particularly convincing. There’s some neat writing involved, such as Mike’s character, who is consistently ‘not strong’ (but also not ‘weak’. He’s like, a well-rounded character? Crazy), and when he wusses at a crucial point, the audience totally buys it. 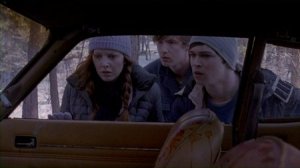 Actual movie quote: “Two things I really like. Drinking, and f*cking people up. And we’re almost out of beer.” Fantastic work, writers.

In regards to the horror, it’s kinda slow. The first death is off-screen, and the second is in the background. Really, there are only a few like, ‘cannibal’ shots, a.k.a Walking Dead-esque feeding scenes. The prosthetics are good, set dressing is nice. There are some inconsistencies, like a perfectly shoveled driveway when the car is buried under 2’+ of snow, buttttttt I’ll let it slide for now.

Donner Pass is one of the only movies I’ve ever seen that makes use of another horror genre’s cliches- there’s a hottub death, and they build up to it like a shark sequence, as though the killer was in the hottub. Kinda nifty.

The end is nice though. Lots of tension build, emotions run high, and the ‘Donner’ killer has a fairly humanizing time of it, and that’s kind of creepy in and of itself. Also, let’s just say that this horror-writer has bad memories of an “X-Files” episode involving skinning, so it made my skin crawl a fair bit.

All in all, it’s not a bad horror film. It doesn’t require your full attention, and it isn’t likely to make you jump out of your socks or anything. If you get kind of creeped out by cannibals or disembowelment, it might make you queasy.