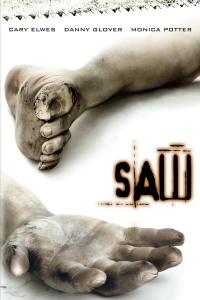 The Plot: A doctor (Cary Elwes) and a sleazy photographer (Leigh Whannell) wake up chained by their feet to opposite sides of a super gross bathroom. As they try to find a way out, they discover tapes and clues left behind by their captor, who wants them to think about why he put them in this R-rated time out. Spoiler: it is for very stupid reasons. One of them realizes that they’re victims of the famous Jigsaw killer, who puts people in unnecessarily elaborate traps and makes them kill themselves. This is also stupid. As they try to escape with their lives, flashbacks happen and we meet the obsessed cop on Jigsaw’s trail (Danny Glover) and some other people who kind of tie into everything. Hey, did I mention that there were some pretty clever traps?

Well, it’s about that time. Let’s get some analysis up in here.

Plot-wise, Saw is pretty straightforward. The present-set story of Jigsaw’s newest two victims acts as a framing device, leading into tons of exposition and flashbacks. It’s not super original, but it works. The flashbacks show how each of them got there, and also explains the whole Jigsaw thing. Frankly, I’m not sure why he’s called “Jigsaw” and not something like “Torture-Man” or “Bad Guy Who Overthought His Own Shtick.” I know those suck, but you get the gist.

As a thriller, Saw does a decent job of keeping the audience guessing and bringing the various storylines together. Things move along at a quick pace, but all of the plotlines are given just enough time to sink in so the audience is never lost. The downside to this juggling of stories is that none of the characters are all that well developed. Sure, we learn more about each of them, but none of them have anything going for them outside of the story. These characters aren’t people, they’re shallow archetypes. There’s Doctor Who Cheats on His Wife, Lowlife Photographer, Obsessed Cop, Nagging/Crying Wife, Frightened Child, and, of course, Bad Guy With Too Much Time on His Hands. 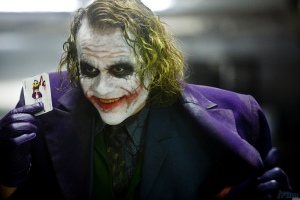 Warner Bros.
No, not that one.

As a horror film, Saw’s appeal lies, obviously, in the traps. The audience gets to watch people die and think of ways that, like I totally would have gotten out of there alive. The ways that Jigsaw kills people—the film says that he doesn’t technically kill anyone, but that’s like calling the IRA “freedom fighters”—are all pretty ingenious, though you have to wonder why he goes to all the trouble. His shtick is that people don’t appreciate life enough so he puts them in these outlandish situations, but it seems like overkill. Why do you need the traps? And the creepy puppet? And the robe? And the henchman in a pig mask? Wouldn’t it be easier and more effective to just kidnap people, torture them a bit the old fashioned way, and then say: “You’ve got to appreciate your life now, okay? Don’t make me torture you again”? In fact, that sounds like a much better movie because it offers the chance for character development all around, instead of never.

Either way, Saw starts out with a good premise—two guys wake up locked in a bathroom and have to find a way out—and ruins it with a stupid villain with an overly complex plan. It’s a shame, because Cary Elwes and Leigh Whannell both give pretty good performances. The roles don’t call for anything subtle, mind you, just boldly drawn expressions of anger, fear, desperation. You know, usual horror movie fare. Danny Glover is forgettable as the former cop obsessed with hunting down Jigsaw, but it’s not like the script gave him much to work with. The rest of the cast is just as adequate. 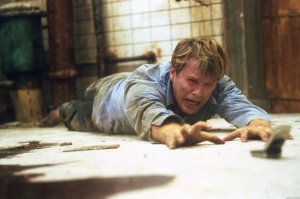 Saw is not a very good movie. It’s not terrible, but it’s nowhere near great, or even as good as it could have been. I don’t regret having seen it, but I’ll never watch it again and I’m probably going to give the sequels a pass. From what I hear, they’re for people who are into traps or who somehow got really, really into the plot. Both left me indifferent, so it looks like Saw and I are parting ways. You might like it, and it’s fine if you do. I promise, I won’t hold it against you.