Now, we all know that “Call Me Maybe” is the perfect pop song. It’s stupid and happy and super goddamn catchy. Weirdly enough, it isn’t about gettin’ drunk and having (probably) regrettable sex, which is the style these days.

Well, do you want me to call you or not?

Quick re-cap: 80s pop songs were about musicians forced to enter a battle of dumb sexual innuendos, most likely to the death. 90s pop songs were either about hating your parents or having feelings, with some sexual innuendos thrown in for good measure. 00s pop songs were about having feelings—stupid, stupid feelings—with some sexual innuendos thrown in for good measure. Now we’ve come full circle and returned to the sex thing, only this time it’s personal and the innuendos have been replaced with drawings of dicks collected from high schools across the nation. But there is no moral decay, just changing styles. Really. Keep in mind that pop songs tend to aim for a teenage demographic. And if there’s one thing that teenagers think about even more than how to cut gym class this Wednesday, it’s sex. This will never, ever change. Ever. Also, and I cannot stress this enough, teenagers are stupid. Even the smart ones. Even the nice ones.

Anyway, back to the task at hand. “Call Me Maybe” is pretty dumb, but also really nice. Yeah, the act of giving someone of the opposite sex one’s phone number may, in this case, be intended to lead to sex, but still. Kid’s just trying to have a good time and meet a nice guy, ya dig? Nothing wrong with that.

But James, this song isn’t even that cool anymore. Why write about it? Good question disembodied voice! Here are a few really, really good reasons for me to do this:

1) It isn’t even that cool anymore, so I can get away with it. As we all know, film criticism is not cool. It is pretentious and lame. And it would be super lame if I tried to critique something cool. Something that used to be cool but isn’t anymore? Whatever, man. This guy’s so square he probably still uses “square” un-ironically. Wait, do you not?

So let’s take a look at the text, shall we? Note: in an academic setting, films may be referred to as “texts.” Crazy, right?

The girl in the video—played by Jepsen herself, allowing the artist to provide a meta-commentary on her own romantic pursuits—is introduced first as a voyeur, shyly observing the scantily clad male in her yard. This reversal of the male gaze, while nothing new, is interesting in a “pop” setting. Is the video intended as an answer to the aggressively sexual and apparently misogynist rap videos of the 90s and early 2000s? A further analysis may yet supply an answer.

Note Carly Rae Jepsen’s Zooey Deschanel-esque bangs as she performs the song. Here, she cultivates an image of non-threatening sexuality. She is attractive, yes, but “adorable.” Perhaps even “adorkable,” if Zooey hasn’t copyrighted that. She is the attractive female who can also exist in a platonic friendship, the product of a post-When Harry Met Sally world, in which men and women can coexist without pursuing a physical relationship. This analysis strongly suggests that the video is indeed a response to the formerly “standard” objectification of women in popular culture. Not only is the “object” presented as male, the—

Okay, I’m sorry; this is getting to be too much, even for me. Let me break it down, before I actually start making a serious attempt at writing a scholarly analysis.

Carly Rae Jepsen is, indeed, pretty adorable. She seems nice, and when she tries to seduce the guy with a car wash she is not very good at doing that. Is it because SPOILER he’s gay, or because she’s too “wholesome” to seduce someone? Common sense says both, but there’s one other piece of evidence that I have yet to reveal. I don’t know why I called it “evidence.” That doesn’t really fit with the rest of this column. Whatever.

Big reveal:  Carly Rae Jepsen was Canadian the whole time. Suddenly, the pieces fit together. The shy attempts at wooing a gay man who seems to be made entirely out of abs, the romance novel-based fantasy, her total inability to be “sexy.” All signs point North, folks. Though it would be easy to read the music video as a cookie-cutter example of a post-modern reversal of gender dynamics, the truth is much more simple: it’s just adorably Canadian.

Or is it a meta-commentary on America’s portrayal of Canada in popular culture? Tune in to next week’s lazily-written Film Theory paper to find out.

In further news, I do not miss college at all. Have a good weekend, and try not to give your number to any ab-beasts. 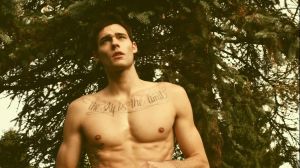 Seriously, those muscles are frightening.

2 thoughts on “Review: The Music Video for ‘Call Me Maybe’ Is Adorably Canadian”