As my twelve dedicated fans will know, I think that Nicolas Cage is pretty great (he is in the movie that I am about to review). During my Stupid Phase in college—every college kid has one—I went from hating him like everybody else to liking him ironically, which is worse. As I became less Stupid, I grew to genuinely appreciate him as a talented actor and Weird Guy. Is there a direct correlation between my slow maturation and my more rapidly growing appreciation of Nic Cage? I’m no scientist, but probably yes.

Still not convinced? Well, you clearly have trust issues, so maybe you should just go cry in the shower while the rest of us have a civilized discussion about the merits of Nicolas Cage. Man, can you believe there was a time where I got paid to write this stuff?

Hey, here’s a list of some great directors that Nicolas Cage has worked with!

Martin Scorsese (Bringing Out the Dead)

“Holy crap, James, those are some great directors! I’m going to give this Nicolas Cage kid a chance! Also, you are super smart and handsome. You should get paid to write this stuff!”

Thanks, dedicated fan! That sure would’ve made my day if I hadn’t written it myself! Ha, I’m just kidding. It totally made my day. 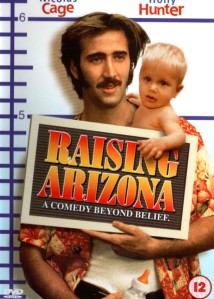 The Plot: Newly-married couple H.I. (Nicolas Cage) and Ed (Holly Hunter)–an ex-con and an ex-cop, respectively–just want to settle down and start a family. When their plans are thwarted by biology, they decide to steal one of a furniture salesman’s (Trey Wilson) quintuplets. Things get complicated when a bounty hunter/biker from Hell (Randall Cobb), Ed’s in-laws (Sam McMurray and Frances McDormand), and a couple of escaped convicts (John Goodman and William Forsythe) get involved. Will love triumph? Will H.I. ever conquer his impulse to rob convenience stores? Will there never be an end to my questions?

Now, all that baby-stealing and devil biker stuff may sound like the makings of a pretty dark comedy to you. Kind of like how when I was a kid every orange cat looked like a fox. Because I loved foxes, and I guess you love dark comedies. The point is, we were both wrong, and it’s time to accept that. That wasn’t a fox, and Raising Arizona is not a dark comedy. It’s funny as hell, and kind of weird, but sweetly so. Much of that sweetness comes from the film’s attitude towards the two main characters. H.I. and Ed are technically criminals, sure, but they have as much right to be happy as anyone else. There’s a great scene where H.I.’s nature gets the better of him on a trip to buy diapers, and he ends up on the run from the police while a very angry Ed drives around town trying to find him. Actually, hey, it looks like that scene is on YouTube. Thanks, YouTube!

H.I. may have a tendency to rob convenience stores, but he’s a really nice guy and his devotion to Ed is as genuine as my devotion to Nicolas Cage, if somewhat different. Nic Cage plays H.I. as shy and little slow, but he never goes over-the-top. I know that like half of you don’t believe me, but I’m being serious. Deadly serious.

Hey, is that poison in your soup, or are you just unhappy to see me? Both, huh?

Holly Hunter is perfect as Ed, somehow striking a balance between her character’s no-nonsense attitude and her tendency to be totally unreasonable. Now that I think of it, Ed reminds me a lot of Penny, Hunter’s character in O Brother Where Art Though? Both women just want stability and a family and a husband who won’t get into quite so much trouble, although Ed’s idea of a normal life may not be quite as bona fide as Penny’s.

Circle Films
“Stolen” is such a strong word, though.

Building upon the foundation laid by Cage and Hunter’s pitch-perfect performances is a great supporting cast, which includes Coen regulars John Goodman and Frances McDormand. The script balances quirks and real emotion to create the kind of sympathetic oddballs you can pretty much expect from the Coen Brothers. That’s a good thing, if you were wondering, although why would you even ask me that? Does it sound like a bad thing?

Raising Arizona is consistently lighthearted and utterly charming. You should watch it right now, if you haven’t seen it already. I know that the Coens aren’t for everyone—even I’m not a fan of some of their movies—but don’t tell me all that stuff I said about lovable characters and Nicolas Cage didn’t make you just a little bit curious.

Also, there are some really cute babies in this movie. That’s always a plus, right? 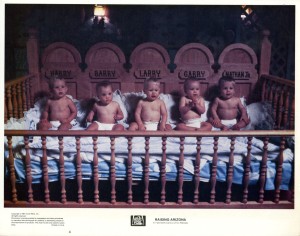 Anyway, tune in this Friday for whatever the Hell it is I end up reviewing for this Friday.

3 thoughts on “Netflix Review: ‘Raising Arizona’ is Sweet and Quirky and You Should Watch It”