Coming from its Japan-loving counterpart “weeaboo”, a “westaboo” is one who is obsessed with Europe or America/American Culture/Cartoons/Comics etc. and assumes everything made in the west is superior to everything else in the world. Characters in Japanese anime that use western imagery, culture, or language despite not having anything to do with said countries can sometimes be referred to as such, due to the fact that there is often no other reason for said character emulating such awkward stereotypes. Now with that said, enjoy 30 minutes of anime characters using English, horribly [1].

Okay, you really don’t need to watch all of that cringe-worthy Engrish [2]. Just continue on with the article.

In the past couple articles, I’ve framed “the token foreigner” as a non-Japanese character who often takes up either a comedic and awkward role or an antagonistic role that can be attributed to their “foreignness”. These representations obviously come with a lot of problems because not only do they make for bad character writing, but they come across as insulting and sometimes racist. But why bother worrying about accidentally misrepresenting a character’s race or nationality? Why bother having a foreign character to begin with when you can just make a Japanese character act foreign? This is another part of the “token foreigner” trope that is strangely common – making the “token foreigner” not even foreign.

In quite a few anime there is a common trope of having a character act foreign, look foreign, and even use gratuitous amounts of English or other non-Japanese language, and yet still be Japanese. There are even cases when an anime does NOT take place in Japan, or even the real world, and yet you’d still have a token foreign character. The reasoning behind such a character may be because they spent some time in another country, because looking foreign allows for some fun and unique character designs, or because said character may be trying to emulate a foreign culture or people without being a part of said group.

Taiga Kagami from Kuroko no Basuke, is introduced as the guy who studied abroad in America. Much like foreign characters in sports anime, which I have mentioned before as being good at said sport because they are from another country, Kagami is introduced as being a basketball prodigy, not because the series at the point of his introduction has shown him being good at the sport, but because he studied in America. Additionally, he is portrayed as rather combative and blunt – things that are attributed to actual Americans in Japan. And much like Asuka from Neon Genesis Evangelion, he complains about Japanese people and their sports practices as being “too soft”. One may say that this deprecation of one’s own culture may almost suggest that the anime is holding up another culture as better, but it comes across more as a negative attribute of Kagami’s character due the fact that he doesn’t work well with others at first, which tends to go against Japanese cultural/societal norms. 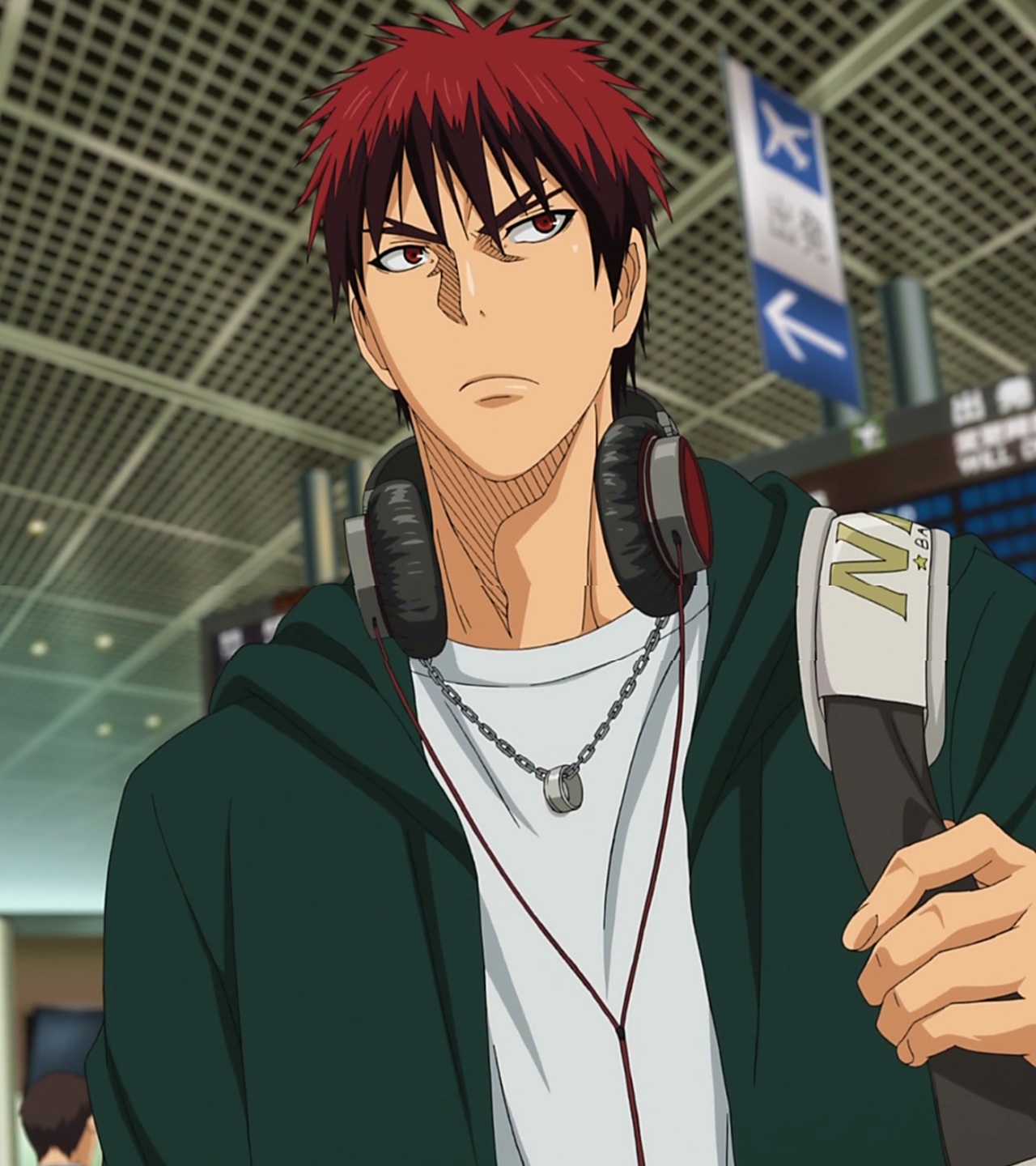 Production I.G
Taiga Kagami from Kuroko no Basket. I’ve really been picking on this anime in the past few articles, haven’t I?

For some characters their nationality is not known and is often meant to be speculated to add either an exotic flair or to make the character more of a mystery. The nationality of L from Death Note is somewhat dubious at first for this reason. The dubiousness of origin is also often purposeful so the anime can still make a stereotype and blame that stereotype on the weird quirks of the character. An example of this is seen in the blond, English-spouting villain Count Zap from Megaman NT Warrior, who ticks all the marks of comedic, villainous, and seemingly foreign, while still being Japanese and supposedly having always resided in Japan. This allows an anime to get away with a stereotype without the character actually being from a foreign country, and puts the onus of misrepresentation on the character themself and not the creator of the character.

On the other hand, an anime could just full on go with cultural appropriation like in My Hero Academia, which I talked about in a previous article. In the article I expressed disappointment with the character All Might, who looks the part of an American superhero, complete with a red, white, and blue costume. His signature attacks include the names of American cities and states. Furthermore, it is stated that he had spent time in America and a big part of his public image is that it is assumed he is from that country. And yet he is not[3].  He is meant to be an homage to American superheroes. This does give at least a much better reason for his representation, especially since the series is very focused on the idea that what a Hero symbolizes matters almost as much as their heroics. If a show was going to use the imagery of a foreign culture or language in the guise of a non-foreign person, then this is probably the more respectful and well-written way of doing it. But at the same time I can’t help but feel that the reason why All Might isn’t actually American, is because it is unpopular to have a non-Japanese hero in an anime.

Bones
All Might in his red-white-and-blue glory! An interesting touch I’ve seen in this anime is that even his drawing and shading style is slightly different compared to the other characters, just to give him a more American comic book feel.

As for characters who are confirmed as being half-Japanese, that, too, is a character type that appears in anime. At times, these characters can fill the “token foreigner” role in an anime, emulating certain stereotypes of the character’s background. On the other hand, said character type is usually written a lot more sympathetically. In Japan, the treatment of part-Japanese people has been a controversial topic in recent times. Since Japan is a very homogeneous and conformative society, being “different” is not considered good most of the time. As a result many part-Japanese people grow up being distanced from society. I personally know many cases in which part-Japanese children, so generously known as “haafu” [4], have been bullied by their peers due to them looking different. Things are changing lately with more foreign or half-Japanese people being represented in media and the workplace. Even Japan’s 2015 and 2016 recent beauty pageant title holders of “Miss Universe Japan” and “Miss World Japan”, Ariana Miyamoto and Priyanka Yoshikawa have been half-Japanese and their stories made waves both in Japan and around the world. However, they still received a lot of backlash from their own country for not being the right representation for the “face” of Japan. In anime, such characters and their struggles have been given some thankful amounts of pause and empathy.

In Ouran High School Host Club, Tamaki is given a lot of development in his struggles to prove himself a true heir to his family’s estate, despite being considered by his grandmother (the decider of who holds the wealth) a “bastard child” whose mother was French. Gokudera from Katekyo Hitman Reborn has a similar backstory, but this time having trouble being accepted by the Italian side of his family. In Detective Conan the character Sherry’s red-brown hair, inherited from her English mother, was the source of her being bullied as a kid, and makes her a literal target by an evil organization. And in Cyborg 009, the  main character, Joe Shimamura is a half-Japanese orphan whose ethnicity left him isolated, leading to a streak of childhood delinquency, before obtaining a hero role in the series. These are the types of stories that make good and compelling characters, and I hold some hope that anime could grow out of its racist trends to bring us equally well written foreign characters. After all there are many people of 100% foreign decent born and raised in Japan who do not hold equal citizenship status with their 100% Japanese counterparts, and encounter similar troubles to part-Japanese people.

So this brings me to the question: “Are there some anime that do a decent job of portraying non-Japanese characters?”.

For the next three articles, I will be talking about three anime that I believe do just that, and they are anime that one would not quite expect. In order, these are the American football series Eyeshield 21, the mystery anime Detective Conan, and a long running superhero team series, Cyborg 009.

See you next week!

[2] It should be noted here that not all of the “Engrish” used in these anime is without purpose. Some English phrases are just commonly used among Japanese people (particularly “lucky”, “O.K.”, and a majority of sports or game lingo). Also English or other languages are used by some characters in anime to help show that a character is youthful, boisterous, intimidating, rebellious, goofy, etc. depending on the phrases used. I would love to talk more about the use of English or other languages in Japanese anime, but that would be a different article entirely. This article focuses on when that use of foreign languages or culture is for the purpose of emulating a certain stereotype or pointing out a specific group of people rather than developing character or story.

[3] Or at least, not likely. Again, this is an example of an anime character having dubious origins. But based on other reveals about the character, it is more likely that he grew up in Japan and is Japanese.

[4] Literally meaning “half” in Japanese.