Ugh, you guys. Ask me how busy I’ve been these past two years. So busy. I’ve been so busy writing a month’s worth of articles about terrible ‘80s fantasy movies, reviewing Vincent Price movie after Vincent Price movie, Peter Cushing movie after Peter Cushing movie, ranting about Hobbit franchise installments and trailers and blockbuster travesties like Jurassic World, and filling space with articles about Shakespeare and Lethal Weapon, that in the midst of all this time-consuming, dedicated, honest-to-goodness high-brow criticism, I’ve somehow managed to miss a few major prestige releases.

This week, I review a movie that I meant to review when it came out… two years ago. Looking back, actually, I see that I did a pretty decent job reviewing new releases around that time, so I can’t be too hard on myself. Oh well. Here I go, timely as ever: 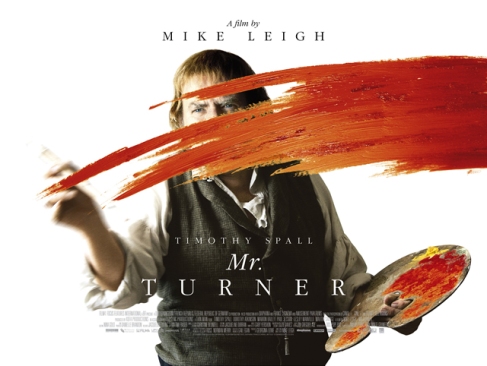 The Plot: JMW Turner (Timothy Spall) was one of the most influential, and indeed, highly eccentric British painters of the late Romantic and early Victorian periods. His developing style pushed the boundaries of accepted artistic conventions and met with widespread disapproval and mockery. Mr. Turner chronicles his professional and personal life, starting at the peak of his popularity, and then continuing through his controversial experimentalism and dwindling reputation, until his death in 1851.

I can’t feel too bad about getting to this one so late in the game, because I think it shall soon establish itself as a timeless biographical representation of one of Britain’s greatest artistic forces, told by one of its most underrated performers. Timothy Spall is a rare talent, and one frequently overlooked and seldom lauded, possibly due to his physical appearance, and tendency to get typecast in ugly parts. I can’t give a better example of this than his involvement in the Harry Potter series, rather perfectly cast as Peter Pettigrew, a man who, at times, literally looks like a rat. More often than not, I find that the best talents are hidden behind the least attractive visages, and in a film industry that places so much emphasis on the marketability of a pretty face, it takes a discerning casting director to break those normalcies. I’d be lying if I said I didn’t have a photo of the eminently beautiful Michael Fassbender on my refrigerator, but I’d just as soon spend a few hours staring at the folds and intricacies of a—how should I say it?—less conventional face, like Michael Shannon’s, or Klaus Kinski’s, or Danish Superstar Mads Mikkelsen’s, or, for example, Timothy Spall’s. 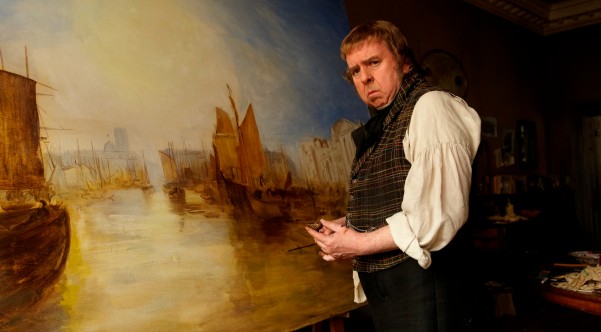 Film4
That face. Truly the Errol Flynn of his time.

But enough about Timothy Spall. While I can’t exactly describe him as beautiful within an orthodox definition, I can use that term to describe this movie. Cinematographer Dick Pope shot the prettiest movie of 2014, and lost the Oscar to Birdman (which, in case you are newer to this blog, I truly, truly hated). Pope mixes his own ingenuity with that of Turner’s, occasionally recreating Turner’s paintings in his camerawork. Director Mike Leigh, perfectly happy for his movie to run as long as it needs to run, allows Pope’s cinematography to linger on screen for several moments, interrupting the story, but not really the flow of the narrative, if that makes sense.

Perhaps the movie’s only real flaw is in its ending. After almost two-and-a-half hours of watching this character develop, Mr. Turner falls prey to an issue that plagues so many biopics. In the end, he dies, and the movie’s over. While it’s possible I missed something of monumental importance, it felt to me as if Leigh failed to deliver any sort of synthesizing message or resonating theme. Given Leigh’s filmography, though, and his persistent attitude of agnostic finality, this may have been a deliberate choice. Leigh’s films rarely uplift in the end, or even fully resolve in a satisfying way. His purpose here is clear enough, reaffirming that Turner’s life didn’t turn out all that well in the end, and while he’s become an accepted canonical entity in art history, he didn’t experience that level of fulfilment in his own life. Maybe deep down inside I’m a bit of a romantic, and certainly I’m not so postmodern in my narrative tastes, but I usually like endings to say something. Not everyone would consider this a fault, but that is my personal preference.

Overall, Mr. Turner is a superb film, giving an influential artist the reverence, if not the resolution, he deserves. I am sorry that I didn’t see it when it came out, but knowing myself as I do, it’s possible I wouldn’t have liked it as much then. Maybe it’s for the best that I wrote all those Vincent Price articles instead. Maybe.