Modern dating is hard. I mean, past dating was hard too, but it didn’t lend itself quite as well to high concept sci-fi as the age of finding romance on Tinder and OKCupid (do people still use that?). In The Lobster, which premiered at Cannes in 2015 and found it way to US theaters this past May, Greek filmmaker Yorgos Lanthimos explores the isolation and stress that accompanies online dating –as well as the culture and commerce that surrounds it– through the lens of dystopian absurdism. Sharp, cynical, and unsettling, The Lobster does its best business the closer it sticks to its novel concept and lessens the further it strays. 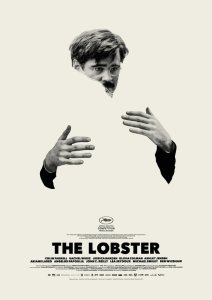 The plot: In the not-terribly-distant future, a government mandate has decreed that single people that do not find a partner by a certain date must be turned into an animal of their choosing. Recently divorced David (Colin Farrell) is sent to The Hotel, a facility where he must find a partner within 45 days before he is turned into a lobster. Stripped down to a single, defining trait (nearsightedness in David’s case)  and made to take part in mandatory social activities ranging from dances to hunting escaped single people in the woods with a tranquilizer gun, David and his friends Limping Man (Ben Whishaw) and Lisping Man (John C. Reilly) search for love to varying degrees of success. Following a disastrous pairing, David escapes to the woods and the society of renegade Loners, where he meets and falls in love with the Short Sighted Woman (Rachel Weisz); but the Loner society has severe punishments for romance, and David and the Short Sighted Woman must keep their love hidden from the commanding leader of the Loners (Lea Seydoux).

In its surface details, The Lobster bares its closest resemblance to Spike Jonze’s 2013 Her: both are sci-fi parables about modern romance centered around forlorn, mustachioed white men. And given The Lobster‘s surprisingly robust advertisement campaign, one could be easily forgiven for thinking those similarities ran deeper. While Her is fueled on earnest emotion and explores the full gamut of experiences of dating in the smartphone era from joy and passion to sadness and alienation, The Lobster is more interested in probing that alienation part of the equation. The Hotel, and its manager, played with powerful, chilling indifference by Olivia Colman become a handy metaphor for dating sites and apps that pare people down to defining traits and interests and engender a sense of anxiety and social rigidity that accompany dating. Guests at The Hotel have their personal clothing taken away in favor of identical suits for men and dresses for women and are restricted in their activities based upon their relationship status (golf and swimming are fine for singles, but tennis is couples only). Lanthimos and cinematographer Thimios Bakatakis film The Hotel in a way that at once highlights how mundane and disturbing the day to day routines of its guests are. Paired with Jacqueline Abrahams’ grey, washed out production design and the discordant classical soundtrack, The Lobster does exceptional work making the trappings of modern dating as alien and baffling as they probably actually are. And then the movie leaves the hotel.

Colin Farrell’s David is a cipher throughout most of his stay at The Hotel. Filmed from his perspective, he serves as the viewer’s surrogate in The Hotel, bearing witness to the sad and defeated desperation of John C. Reilly’s Lisping Man and Ben Whishaw’s Limping Man’s transformation from sensitive and sad to anxious and creepy (a fantastically skin-crawling scene at the swimming pool takes the film into horror territory as a girl swimming in the forefront is shadowed by a predatory Limping Man about to make a fumbling attempt at a pick-up). For most of his stay, the viewer doesn’t get much of a sense of David’s emotions, save for the interjections of a mysterious narrator. One flight from The Hotel to the woods later, and we learn that the narrator is the Near Sighted Woman. From here the movie changes focus and David is forced from his role as passive observer to romantic hero, and the transition is not easily made. The love story between David and the Near Sighted Woman (the NSW from here on out) isn’t bad, but it takes too long to tell. As counterpoint to the hotel, where any matches made strike as inauthentic, Lanthimos creates a realm where a genuine connection is made, but not allowed to thrive. Here the allegorical thread begins to unravel, as Lanthimos gives the relationship between David and the NSW a little too much room to breathe. Against the backdrop of trips to the city and entering into the inner circle of the Loner leader, Lanthimos paints a larger picture of the world and structure of The Lobster and where this relationship fits within it; but it’s a movie where a half hour of this section could be removed in the name of a leaner film. 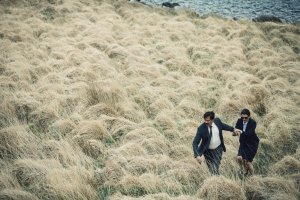 The Lobster is not a fun movie. That’s fine, it absolutely shouldn’t be, but I do wish someone had told that to the folks who assembled the trailer. It’s not ideal viewing for those among us who aren’t keen on sudden fits of shocking violence or dwelling on the more anxiety-inducing aspects of 21st century dating. It takes a cynical view to be sure, and the viewer looking for a more cathartic take on love in these wacky modern times might just want to check out Her again instead.