The Plot: Would you believe it if I told you? IMDb offers this: “A young man must stop the Lord of Darkness from both destroying daylight and marrying the woman he loves.” Now, while technically true, this plot summary does omit a few key details. First, the young man is played by none other than 1985 Tom Cruise. Second, the woman he loves is played by Mia Sara (whom you may know from such 1985 releases as Ferris Bueller’s Day Off) at the height of her babe-itude. Third, the Lord of Darkness’ outrageous makeup design, pictured below, makes him the most beautifully over-the-top depiction of the devil ever. Fourth, the Lord of Darkness is played by TIM CURRY. Fifth, and most important—even more important than TIM CURRY—is the exact nature of Darkness’ plan to destroy daylight. In order to do this, he must destroy the physical embodiments of light, which happen to be attracted to innocence and goodness, which is why he kidnaps Mia Sara, to use her as bait. How does light manifest in a physical form? Why, how else? UNICORNS. 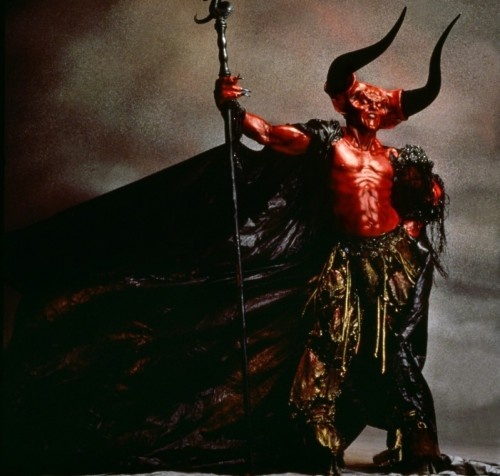 This movie has everything, and I cannot fathom why more people don’t unabashedly love it; what’s more, I can’t quite wrap my head around what inspired a post-Blade Runner Ridley Scott to direct this film, and to spend an inordinate amount of cash to realize the acres of carefully constructed fantasy sets he used, and to make so many Citizen Kane references within those sets, and I can’t quite reconcile the logic of the film with that of the real world, and I can’t explain how Legend managed to have such an artistic influence on the visual development of both Legend of Zelda and PJ’s Lord of the Rings trilogy, but I can say, with a nearly-credible degree of certainty, that regardless of the reasons and motivations involved, all of these things did happen, and my goodness is it ever—in every sense of the word—fantastic.

I guess aside from Ridley Scott’s honest-to-goodness, gob-smacking visual sense and Tim Curry’s… everything, the one thing that strikes me as most memorable is Tom Cruise’s lower body. That may sound like either an inherently memorable thing or something that one might strive to forget, but I should elaborate. Tom Cruise does not wear any pants throughout this entire movie. He has this little tunic thing instead. Bare legs. At one point he even finds a magical suit of armor that he needs to put on to fight the bad guy, but he only takes the torso. I mean. Yeah. Just… yeah. Remember what I said about the internal logic of the movie and any sort of real world logic? It just doesn’t happen here.

Embassy International
Actually, the costuming just makes a ton of sense all around.

Oh shit. Did I mention Tangerine Dream? I think I didn’t. Okay. The film’s original score was composed by Jerry Goldsmith, who worked with Scott on Alien and is considered one of the big names in movie music history. You can still hear this soundtrack on the DVD director’s cut, but the original theatrical edition came with a different score, one by German techno-synth group Tangerine Dream. The producers heard Goldsmith’s symphonic, orchestral score and thought, “Yeah, alright, but what about the kids? The kids are all into pop music and rock and European stuff like ABBA er whatever. Can’t we use something like that? You know, to appeal to the kids.” Somewhere along the line they signed on Tangerine Dream to work their magic and the result is… uh… just wow. I mean, to pair Tangerine Dream with the above plot summary and everything I just told you about Tom Cruise’s legs. It is, in the literary sense of the word, sublime.

Plus, Ridley Scott does unicorns. Remember that dream sequence from Blade Runner with the unicorn galloping in majestic slow motion through a tranquil woodland area? It’s just like that, but for an hour and a half. I don’t know if I can say that this is the most quintessentially ‘80s movie I’ve ever seen, because there’s always Bill and Ted to consider, but it is by far the greatest ‘80s fantasy movie. Man, this is why I got into the sub-genre in the first place. Imagine my disappointment when I delved deeper and found only the likes of Dragonslayer and the excessively groan-inducing The Sword and the Sorcerer. Don’t watch those other movies I’ve reviewed. Watch Legend. Watch it and enjoy it, because it is fantastic. Honestly, literally, proudly fantastic. And Tim Curry is just the man.

3 thoughts on “Second Breakfast: The Wonder and Majesty of Ridley Scott’s ‘Legend’”