Here there be spoilers for Batman v Superman and the Fast & Furious franchise. Ye be warned.

Warner Brothers and DC Comics are faced with the unenviable task of turning the hesitant, self-interested heroes of Batman v Superman: Dawn of Justice into an effective superhero team by the time Justice League Part 1 hits theaters in November of 2017. In addition to cementing the bond between the heroes at the center of BvS, Justice League Part 1 also has the daunting task of introducing new heroes into the mix with Aquaman, Cyborg, and The Flash. Bringing these characters together, and making the audience care about them, is a mighty task, and to accomplish it, DC might want to take a page from last year’s best superhero team movie.

Huh? Avengers: Age of Ultron? That was pretty okay. But I’m talking about Furious 7.

The last three entries in the Fast/Furious saga have seen the franchise shy away from its humble “Point Break but with cars” origins and into the full blown comic book territory of characters returning from the dead and evil opposites. But as the franchise moves into increasingly ridiculous territory one quarter mile at a time, one constant remains (aside from racing, gratuitous butt-shots, and the endearing sincerity of Vin Diesel): a commitment to characters.

The Fast/Furious movies shine through in their ability to make audiences invested in Dominic Toretto (Vin Diesel) and his constantly fluctuating “family” of criminals-turned-stunt driving heroes, the sort of character investment DC sorely needs after Batman v Superman. At the end of BvS, I couldn’t tell you why the combatants stopped hating each other aside from coincidence and an easily-avoided death. A quarter into Furious 7, I was able to understand where each member of Toretto’s crew stood with one another and how Dom’s bromance with Brian O’Conner (Paul Walker) differed from his burgeoning bromance with Dwayne “The Rock” Johnson’s DSS agent Luke Hobbs. Furious 7 wants you to care about these muscly goofs, and it’s going to give some damn good reasons to do so. This has a lot to do with the way the Fast/Furious series utilizes the language of comic books. Stan Lee’s philosophy for writing comics in the 60s was that “every issue is someone’s first issue”, and I think F&F  follows a similar mantra.  The franchise’s use of flashbacks and telling banter translates the expository dialogue used in silver and bronze age comics* to bring new readers up to speed to film with remarkable aplomb. One gets a good sketch of how Dom and Hobbs have transitioned from enemies to easy pals over the course of three movies in a hospital room conversation between the men and Hobbs’ young daughter, and as a result, the stakes of the plot heighten.  It’s ironic then that a common complaint leveled at the the Marvel movies is that the later releases are inaccessible to viewers who didn’t watch the previous installments. Instead of necessitating a list of further viewing that might start to feel like homework for the casual viewer, Furious 7 gives you everything you need to know. If DC and Warner Bros are still planning on adhering to their release schedule of 8 comic book movies between now and 2019 (10 counting out-of-continuity movies Lego Batman and Shazam),  it might be wise for them to take a lesson from Stan Lee by way of Vin Diesel. 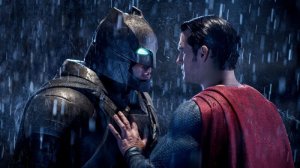 Universal Pictures …could become this.

Though the franchise remains focused primarily on Dom, Brian,  F&F never forgets to make the rest of its cast interesting and vital. Much has been made about the brotherhood between Dom and Brian, but for my money, one of the best friendships in the series is the one between Tyrese Gibson’s cocky goofball Roman and Chris “Ludacris” Bridges’ soft-spoken tech-wiz Tej. While busting on Roman is something of a pastime for Dom’s crew (so many giant forehead jokes), few pairings possess the natural chemistry Tej and Roman’s opposites-attract friendship that develops over the course of Fast‘s 5 through 7; a friendship that develops naturally in the margins of the larger story. Superhero team movies tend to falter when the focus shies away from the top-billed stars, resulting in teams that don’t feel as dynamic as they should. While one can expect DC’s “holy trinity” of Batman, Superman, and Wonder Woman to take center stage in the Justice League movies, DC could do worse than to look at the friendship between Roman and Tej to endear viewers to the lesser-known members of the league; particularly for the developing the friendship between Cyborg and The Flash. The youngest members of the Justice League by nearly a decade, the friendship between two superpowered twenty-somethings on a team of older, gravely serious heroes opens up the possibility for a deeply layered –and if the story called for it, fundamentally divided– team of heroes.

The Fast/Furious family is distinguished from other blockbuster ensembles by the way it expands and retracts with each film. While the tragic death of co-lead Paul Walker led to a reorientation of the franchise and one of the most unexpectedly affecting endings to a big budget action movie in Furious 7, the franchise was no stranger to handling losses in the family and welcoming new members. In the span between Fasts 5 and 7 two characters die, one returns from the dead, four join the family, and four bow out of the action. Dom’s crew remains fluid, and yet none of the relationships between this family in flux feel cheapened as a result. Dom’s adventures with Brian come to a bittersweet close, but his adventures with Hobbs and Kurt Russell’s covert ops director Mr. Nobody are just getting started. The friendship between Roman and Tej continues to go strong, but could Tej’s developing relationship with hacker and newly-minted team member Ramsey (Nathalie Emmanuel) cool their romance? Like a real family, the status quo of the Fast/Furious characters is liable to change with the seasons. While Justice League parts 1 and 2 are sticking with the classic lineup of Batman, Superman, Wonder Woman, Flash, and Aquaman (with Cyborg filling in Green Lantern’s usual slot), adopting the shifting lineup of Fast/Furious movies could allow the franchise to change and renew with time and dabble with the different lineups that have defined the League over the years. Want to have the hesitant Superman of the Snyderverse conflict with a more level-headed and more willing savior in fellow extraterrestrial Martian Manhunter? Go for it. Grant Tyrese his wish of playing Green Lantern John Stewart? There’s room for it. Bring in the absolutely perfect bromance between Blue Beetle and Booster Gold? Please. 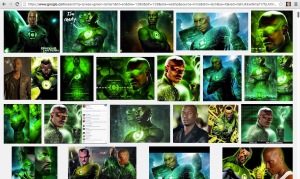 There’s so much Tyrese as GL fan art. How could I choose just one?

Like a lot of superhero team comics, the Fast/Furious franchise plays a lot like a soap opera with bigger action and more frequent explosions. In all three, the plot serves mainly as a window dressing for the characters and their interactions. Batman v Superman promised Big Plot Developments in the Justice League movies, but struggled to make a compelling argument for why we should watch those characters again aside from their iconic status. It doesn’t matter in the slightest which drug lord/ international terrorist/ Jason Statham Vin Diesel & co. are going to have to car stunt into submission in Fast 8, but I’m know I’m going to enjoy spending more time with Dom and his family. DC and Warner Bros have borrowed from the Fast & Furious playbook in the past –bringing in Fast/Furious alum Gal Gadot as Wonder Woman and hiring Furious 7’s James Wan to helm Aquaman–  but maybe it wouldn’t hurt to borrow a little more.