I’ve decided, for whatever reason, to devote the entirety of April to reviewing terrible ‘80s fantasy films. Having now commenced this process, I can honestly say that it doesn’t stand as one of the absolute best decisions I’ve ever made, because, I mean, well, let’s just let the movies speak for themselves, shall we?

The Plot: Sir Gawain and the Green Knight.

Funny thing about Sir Gawain and the Green Knight, if you’ve never read it: it’s a pretty good story. I’ve covered this topic before while discussing adaptations of both fiction and history, and even more specifically Arthurian legends, and the persistent problem to which I find myself returning is in this confusing practice of taking a perfectly good story and altering it just enough to make it stupid. So indeed, here’s the aforementioned thing about Sir Gawain and the Green Knight: if you didn’t change a single aspect of the story, you’d have a pretty good jumpstart to your film. Watching Sword of the Valiant, I realized that if it hadn’t kept the names “Gawain” and “Green Knight,” I probably never would have made the mental leap to the source material. But really, a messy adaptation is the least of its problems.

So, I know what’s been bothering you. I know that one question that’s been eating at you for the past few years or so, tearing up your insides and torturing you at night. You’ve always wondered what Sean Connery, Trevor Howard, Peter Cushing, and John Rhys-Davies were up to in 1984. Well. Well. The answer to that question is perhaps even more devastating than the power of uncertainty, for you see, they were all four of them in Sword of the Valiant. The latter three have comparatively minor roles against Connery’s simply gob-smacking turn as the Green Knight. Credit where it’s due, he does actually, for some reason, noticeably try in this movie. He tries, bless him. Although his efforts are somewhat smothered by his astounding costume, and of course by the overall crappiness of the rest of the movie. But fo realzies, check this kid out: 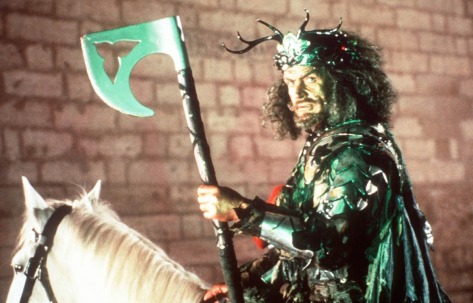 MGM
This is more or less what I want to be when I grow up. Dope, axe, tho, bro.

Okay, okay. Now that we’ve done that. Now check this kid out, because this kid, well, this kid:

MGM
No wait. This is what I want to be when I grow up.

That is Sir Gawain himself. Have you ever seen anything more quintessentially 80s fantasy? What about this:

MGM
My only regret is not being able to find a good shirtless pic. You’re really missing out.

At this point I’m tempted to just bombard you with pictures for the rest of this post. Who needs words? Look look! Stills from this movie have actually become medieval stock photos. I cannot make this stuff up. 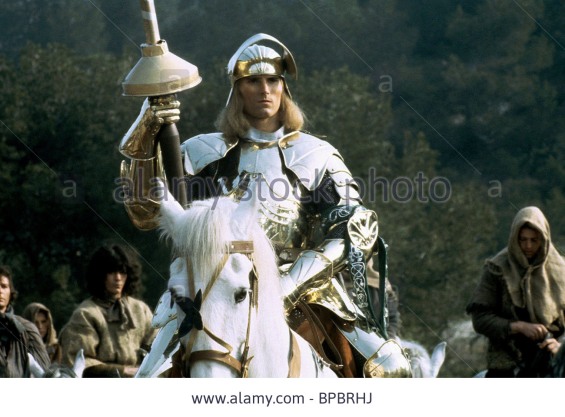 MGM.
Wait… if it’s technically a stock photo do I need to cite it?

Okay. I’ve got to stop giggling. In spite of the glory and wonder of Miles O’Keeffe’s hair, Sword of the Valiant earns, in every conceivable way, its 4.3/10 rating on IMDb. I don’t usually agree with IMDb ratings, although they can be quite telling in some respects. I have found that, in general, if a movie scores below a 6/10, there’s a pretty decent chance that it’s actually just a pile of poo. Now, a lot of things impede Sword of the Valiant from achieving a quality status, but I’d like to focus in on just a couple.

When we first meet Gawain, he’s a humble squire, an all-around nice, meek, unassuming, gentle soul who cares deeply for the honor and reputation of his king, so he volunteers to the Green Knight’s challenge when all of Arthur’s knights refuse. Impressed by his valiance, the king knights him and sends him off on a quest before he can face the Green Knight again. Now, admittedly, I myself have not been knighted, so I can only speculate at the emotional and psychological impact that experience would have on an impressionable young mind. I could understand a slight inflation of the ego. Gawain, however, instantaneously transforms from humble servant into the epitome of 80s college bro. It is an immediate, dramatic, irreversible character shift. Actually, that very small, low-res picture over there kind of perfectly captures what happens. It’s true what they say. A picture is worth a thousand words.

The only other thing I’d like to comment on is the incessant grunting. There are a lot of sword fights in the movie, all of which are marked by this overpowering, loud, monotonous, rhythmic grunting. There is a metronomic pulse to every sword fight: swoosh, clash, swoosh, clash, swoosh, clash. If I were writing it as sheet music in an achingly slow quarter note = 60 4/4 time signature, there would be a steady, consistent quarter note call and response between swooshes and clashes without rests, eighths notes, or any other even remotely interesting variations, but there would be a second part: a duet of grunts between the two combatants. With each swoosh and each clash, there would be two simultaneous grunts. And this, this is exactly the reason why I did not become a composer.

So, that’s the first of four Sundays in April. Will I be able to keep this up? Will I achieve anything noteworthy in my analysis in a decidedly fourth-rate, maybe even sixth-rate subgenre? I kinda doubt it…….. I leave you with this gem: 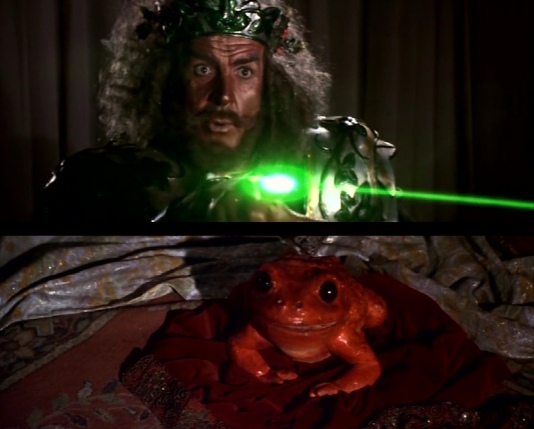 MGM
In retrospect, I haven’t wasted a second.