It is only with the heart that one can see rightly. What is essential is invisible to the eye.

The Little Prince is a beautifully animated and beautifully told story that is at times both heartwarming and heartbreaking, and teaches us about both childhood and how to grow up. I would not hesitate to say that this film is one of the best animated films of 2015, when it was released in France. However, this French-Canadian created, English language film, unfortunately didn’t get a theatrical release to the United States until March of this year causing it to be not as well known to this part of the world. Despite this, The Little Prince is a definite must see film, but if you do, prepare to bring some tissues. It is a very philosophical film and packed with social criticisms, focusing on childhood truths and the ridiculousness of the adult world. It is portrayed like a children’s film, but it’s depth and messages are as much meant for an adult audience. 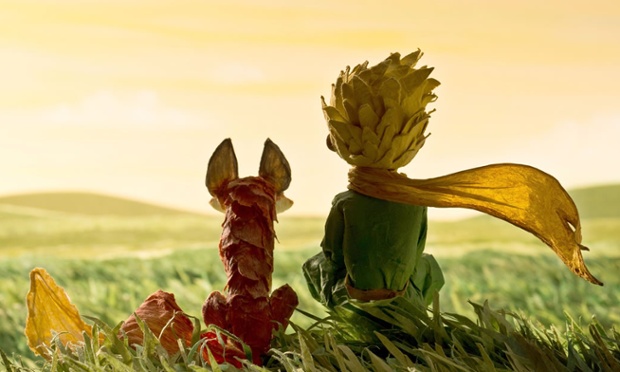 The story has a frame narrative wrapped around the story of The Little Prince itself. The frame story is about a girl (Mackenzie Foy) with an overbearing mother (Rachel McAdams) who wants her to succeed academically and get into the prestigious Werth Academy and has basically scheduled her entire life down to the minute – “not leaving anything up to chance”. However, chance happens, when the girl meets an eccentric old aviator (Jeff Bridges) with a story to tell. This story is of the titular Little Prince, whose story and themes slowly begin to intertwine with the frame narrative itself. It should be noted that none of the characters have names, with the credits even naming the characters “the girl”, “the narrator”, and “the little prince.” The opening scenes tell us a lot of what we need to know about the story and reflect later lessons. The aviator’s explanations of his drawing of a boa constrictor as a child and the adults’ reactions to it, show a divide in the mind of a child and the mind of adults. Also, the little gril’s interview, memorizing the reply to the question “Are you Werth Academy material”, but instead being asked a similarly innocuous question of “What do you want to be when you grow up?” shows the impossibility of a child to really understand these things, and how one cannot simply plan life on a schedule. The focus of the adults in the movie on what the girl wants to or should be when she grows up works well since we see how they focus on the growing up, and not on the childhood.

When the girl meets the aviator, he reminds her of what it means to be a child which allows her to break free from her daily schedule. Both the frame story and the prince’s journey stress the importance of not forgetting childhood, especially with how one views the wonders of the world. But at the same time it involves a little girl having to learn about very “adult” lessons, including those of love, loss, death, and letting go. It tells us the important things that one should hold onto and cherish, and not dwell on the things that are not “essential”. The word “essential” is used a lot throughout the film, especially towards the end, when the characters enter a world of only adults. There is a scene where the girl and the aviator are in a car and watch a butterfly flying through the car. This scene is put in slow motion, to stress how in-the-moment they are. Their slight crash and quick arrest by the police officer is symbolic of the grown-up world clashing so abruptly with their child-like view of the world. Much importance is put on faith and hope, and  the movie made me think of the ending of Pan’s Labyrinth in that certain parts of the film could be taken as either happy or sad depending on the mindset of the viewer.

The animation and other details of the film furthers its themes. The frame story is computer animated, while The Little Prince’s story is stop-motion animated, which is gorgeous and looks like moving paper, furthering the storybook feel of it. It also uses the illustrations from the original book of “The Little Prince.”The music is great; picking up and slowing down accordingly in the background as the girl’s curiosity arises. There are radios set to an NPR style station in the background, which give a sense of monotony to the scheduled life of the girl and her mother. The fox’s quotes and lessons are at the very heart of the film’s messages, and it is his quote that I have put at the beginning of this article.

The Little Prince is a powerful movie that has a lot to say. I recommend it for adults and children, though parents should know their child to make sure their kids are ready for some of the heavier themes the story has to offer.

2 thoughts on “Saturday Morning Cartoons: “The Little Prince” teaches us what is essential”