A few weeks ago I published a list of my top ten favorite films from 2015, and stressed in that opening paragraph, which I assume everyone skipped over, that last year saw the releases of well over ten great movies, making for a nice break from the norm. I gave a shout-out to some of the movies that I loved but that didn’t make it on the list for whatever reason. I love it when I see a movie that makes me rethink my top ten list. It doesn’t happen often, but when it does… 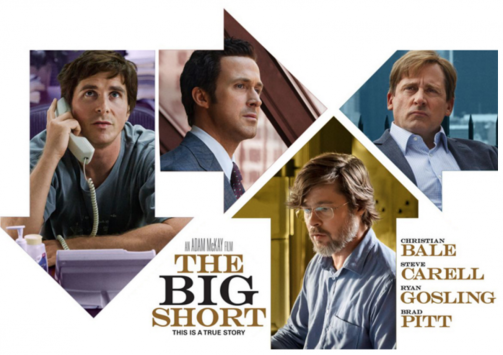 The Plot: In the years leading up to the economic crisis of the mid-2000s, four separate groups of economists, headed by Jared Vennett (Ryan Gosling), Michael Burry (Christian Bale), and Mark Baum (Steve Carrell), and also featuring Brad Pitt and a ton of other actors, manage to predict the impending doom. As they strive to bet against the market in a ploy that will leave them immensely wealthy in a time of crushing financial turmoil, some of them allow their consciences to get the better of them and desperately try to expose the housing bubble and the greedy system that created it.

Despite focusing on the world of high finance and building towards an ending we all know is coming, The Big Short somehow manages to distinguish itself as one of the most original and creative movies I’ve seen in recent years. I want to say it’s filmed in a documentary-esque style, and that it’s sort of a comedy, and that it demands justice for the crimes it depicts, but none of those statements are wholly true, nor are those labels satisfyingly accurate. It does have a documentary feel at times, utilizing hand-held cameras, fourth wall breaks, and informative captions but it also breaks any semblance of reality as often as it can, and I think that’s why a lot of people are calling it a comedy, even though it tells the story of a tragedy, and it doesn’t seem to make any political demands, either.

Plan B
It only demands that we give Jenga a chance.

Regarding the comedy, there are some genuinely funny moments in this movie. Whether talking to each other or directly at the camera, all of the characters have some brilliant quips; in fact, the script is altogether really sharp, but that’s not what has people calling it a comedy. It’s the aforementioned breaks from reality. For example, whenever the economic jargon is getting too foreign and convoluted, Ryan Gosling’s voice interrupts the action to acknowledge that, to most members of the audience, the dialogue doesn’t make any sense, “So here’s pop superstar Selena Gomez to explain it,” or, “Here’s Margot Robbie in a bubble bath to tell you what’s going on,” or, “Here’s celebrity chef Anthony Bourdain to illustrate using fish.” These might seem like arbitrary jokes, but, like all the jokes in the film, they serve a powerful thematic purpose, to emphasize A) just how absurd the whole situation is and B) the fact that, really, nobody has a clue what’s going on. Those are just some of the more obvious fourth wall breaks. Nearly every major character (maybe ten people in total) at some point turns and speaks directly to the audience in the middle of a scene. At one point one of the characters (played by Finn Wittrock) addresses the viewer to explain, “This didn’t really happen,” which nicely contrasts another point where Ryan Gosling assures us, “This really did happen; he actually said that.” Even these instances help to reinforce the idea that we enthusiastically accept the word of a person we perceive to be authoritative, which is partly why we had an economic crisis in the first place, and furthermore, anyone can assume that role regardless of their background or qualifications.

Plan B
Yeah, seems like a perfectly good way to learn about the economy.

The Big Short breaks about every narrative rule in the filmmaker’s handbook, and usually that’s a bad thing, but writer/director Adam McKay really makes it work. He’s able to capture the incomprehensibility of the situation without alienating his audience, without insulting the viewing masses, and without making any of his principle characters appear villainous. The Big Short purports that while certain people acted out of greed and cheated innocent people who didn’t know any better, the real issue came about as a product of a convoluted, bureaucratic, behemoth system that no one could control but anyone could exploit. It tells its story without offering apologies or solutions, but it doesn’t come across as a blame-laden exposé, making it the rarest kind of scandal movie… so rare, in fact, that at present I can’t think of another film that achieves the same thing. Thumbs way up to everyone involved.

One thought on “Second Breakfast: ‘The Big Short’”