A Bigger Splash is a European movie about artistic types in relative seclusion on a Mediterranean island. This premise guarantees a few things: duplicity, passive-aggression, unexpected bursts of violence, occasional shouting, some Rolling Stones, drugs, baggage, and a fair amount of gratuitous nudity, although now that I think about it that last item is more a less a given with this cast.

All of these elements work to varying degrees. Chief among them, and apparently deserving of its own short paragraph, is the usage of The Rolling Stones. I should precede this with a note on Harry Hawkes, Ralph Fiennes’ character, and probably the most intriguing and well-realized of the four. He’s a loud-mouthed, no-filter, high-energy, once-was rocker, an ex-lover of Marianne’s and ex-best friend of Paul’s, the one guy who’s trying really hard to have a good time even though everyone knows that’s not going to happen. Well, in one of his more inspirational efforts he dances alone to the Stones’ “Emotional Rescue,” and it is truly a sight to behold. Have you ever seen Ralph Fiennes dance badly? No? You might want to get on that. 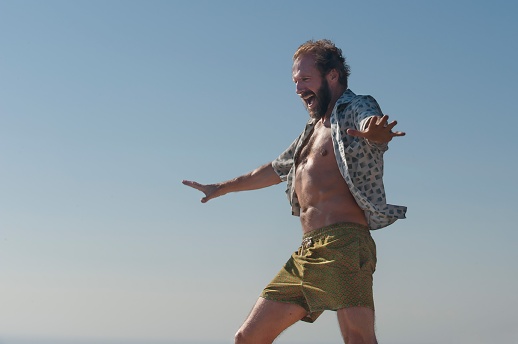 If Harry sounds like a quintessentially pathetic figure, that’s because he is. Actually, they all are. Making movies about pathetic characters is a dangerous game, but it can be done, usually through comedy. A Bigger Splash sort of counts as a comedy. It has that feel to it, as well as a few genuine laughs, but A Bigger Splash only really works because none of these character are outwardly pathetic. You only realize how pitiful they all are once you’ve stripped away their humor, their energy, and their pretense.

Having done that, what remains forms a rare final product: a depressing comedy. Here’s what we have: a rock star who’s lost her voice and is in danger of never getting it back; a filmmaker who only takes still photos after attempting suicide; a former rock bigwig who’s lost the only people he’s ever actually cared about, but can’t admit that to himself; and, worst of all, a millennial. Through these characters, the actors and filmmakers manage to produce a poignant criticism of the current generations, as well as a gruesome premonition for the future. Our society has told us from an early age that we are all special, we are all the best, and we can achieve anything if we put our minds to it. It may feel like an innocent enough lie to tell a child, but A Bigger Splash shows what can happen if that lie survives into adulthood. In an obsessive struggle to become something, you can wind up being nothing at all. But of course J.D. Salinger summarized this detrimental sentiment best of all in his excellent Franny and Zooey, “I’m sick of not having the courage to be an absolute nobody.”

Studio Canal
Not to imply that any of you are nobodies.

Now, regarding the cast, otherwise known as “the thing that sold this movie to me and pretty much everyone else who saw it;” as a rule of thumb, a movie starring Tilda Swinton is always worth watching on at least some level. I like Ralph Fiennes, but he can often be a little hit or miss for me, especially when sitting in the director’s chair. But he didn’t direct A Bigger Splash. All he really did was totally steal the show. What at first feels like overacting you later realize is overacting, not from Fiennes, but from his character. Fiennes takes what easily could have been an obnoxious, over-the-top loudmouth and transforms him into the most intriguing and deep figure onscreen. Matthias Schoenaerts, whose name I have correctly spelled twice now, gives an appropriately, comparatively understated performance, which provides a nice contrast to the louder characters, but he doesn’t allow himself to get drowned out.

I had come to expect a certain quality from those three, especially Swinton, so I wasn’t in any way surprised that they acted in top form. What’s more, none of them really needed this movie. Swinton and Fiennes are universally respected and well-established stars; Schoenaerts is on the up-and-up, quickly threatening to become Europe’s leading hunk. But damn, Dakota Johnson. Who knew? I have not seen Fifty Shades of Grey, which is not a decision I regret, but something like that is a kiss of death to a young actress at the start of her career. It may pay well, but getting real roles after blockbuster softcore porn is like building a stable career on a foundation of Bond girls. It can be done, but it’s difficult. Well, Johnson demonstrates a quality of performance that not only holds its own against her costars, but also bodes well in one particular way. She probably got her first gigs by virtue of being the daughter of Don Johnson and Melanie Griffith, but now we know she deserved them, and deserves a bright future. Kudos to her.

When A Bigger Splash ended, I was genuinely unsure as to whether or not I liked it. It’s been getting seriously mixed reviews, doubtless due to this uncertainty. I liked watching it, but felt empty when I left the theater. It was only later, having thought about it a bit, that I realized that I was meant to feel a little empty, because that’s the whole point of the movie. It’s a sad movie, but delivered in the guise of a happy movie, so it takes a bit of work on the viewer’s behalf. Even then, it might not be your cup of tea. If you disagree with that message or just find European movies about horny bohemians insufferable—which I have to admit I usually do…—then I can hardly recommend it. But, after some thought, I really liked A Bigger Splash.

One thought on “Second Breakfast: ‘A Bigger Splash’”