Baddie: Activists! Who do they even help, really?

I finally had a chance to see the long-awaited The Green Inferno in theaters, so enjoy this extra-special review in the midst of my 90’s Octoberween. The regularly scheduled programming will resume tomorrow as per usual.

I have a little bit of a love/hate thing for Eli Roth. Mostly the ‘hate’ thing, but it’s not for reasons you might think. Do I think he makes violently exploitative movies and calls them horror? Sure. Do I think he contributes to the horror genre in inventive ways? Not really, no. I think Eli Roth makes movies that are subversive, but not in the way that he thinks they are.

Most of his opus deals with people arrogantly positioning themselves where they shouldn’t, and The Green Inferno is no different as we follow a group of activists into the Amazon to stop a lumber company from destroying a previously untouched tribe. Naturally this backfires magnificently and their plane crashes on their return, leaving about six of them to get captured by that tribe and subsequently -gasp- discover the tribe is cannibalistic.

Let me be absolutely crystal clear here – portraying untouched (by Western culture) indigenous peoples as violent, uncivilized and otherwise ‘backwards’ is not okay. Making exploitative movies about them being cannibals is not okay. The Green Inferno is meant to evoke feelings of older Italian cannibal movies – which it does successfully – but I think it was intended to be more tongue-in-cheek than it came off. There are moments of humor as well as outlandish gore, but ultimately the film felt just as arrogant as its characters. This includes the title itself, as The Green Inferno is the name of the documentary being made during Cannibal Holocaust.

There was a lot of hype surrounding this movie, and at the risk of sounding like another jaded horror fan, I’ll say that I was not shocked by The Green Inferno. Most of the tension is introduced by the characters not wanting to be eaten, but when each character is dispatched, it is done quickly and mostly quietly. Foam body parts are systematically shoveled into an oven and then consumed. The grossest is probably Jonah’s death (the first), but then after that it was kinda meh. One character even dies off-screen completely. So if you were discouraged from seeing a movie of truly disgusting proportions, it is not The Green Inferno. Sorry to disappoint. 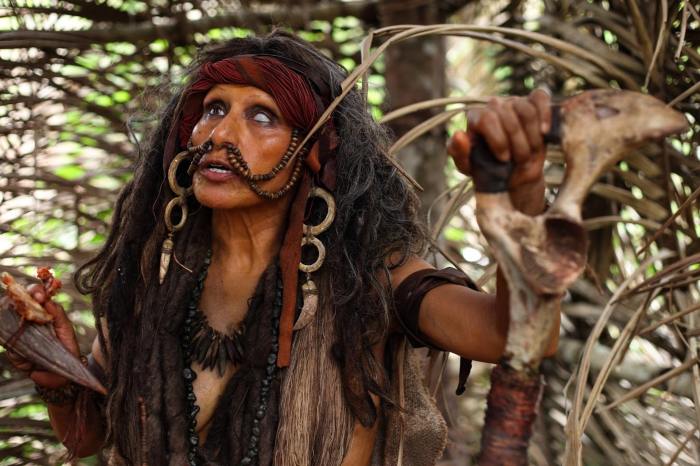 As mentioned, the title The Green Inferno is a reference to the movie-within-the movie Cannibal Holocaust, widely regarded as one of the most violent movies ever made, and had entirely convinced the public into believing they had actually watched people die. There are real animal deaths, and it’s still banned in some countries. Cannibal Holocaust is the most horrific movie I have ever seen. The Green Inferno barely holds a candle.

For a gory movie, I personally did not find the prop work entirely convincing. Everything seemed to have the wrong bounce and weight, and that leant itself to a certain goof factor that, again, may have been intentional, but was ultimately distracting. The special effects were solid, with the eating-alive scene the most effective. Limb separation was believable, if a little corny at times.

There are some redeeming factors in this movie, and I’ll begrudgingly credit Roth with his attention to…women. I’ve mentioned the scene in Cabin Fever once before, and I’ll say it again – Roth knows how to scare women without rape. There is no rape in The Green Inferno, a feat I consider pretty impressive considering the genre and the certain horror tropes. There is penetration, in the form of the tribal leader ‘finding the virgin’ via wooden finger implement, which aside from inaccurately portraying virginity (blood gushes down her leg) is not ideal or necessary, but is technically depicted as a ceremonial action. In the context of an already exploitative movie it’s not the height of feminist theater or anything, but I guess the compliment here is, “I expected much worse”.

Roth also had the decency to minimize genitalia and boobs in this movie, which was kind of nice. Most movies with tribes feature a lot of female nudity, which was not present in this film. Back to the scaring thing – I would venture that most horror movies target women’s fear of rape (loss of control) or maternal parenting. As per usual, Roth does something smart, but follows it up with something dumb. He introduces female circumcision early in the movie, and it’s clearly foreshadowing. I spent most of the movie waiting for it, internally horrified that I would be forced to watch someone be mutilated that way. This introduction of tension was smart. Actually following it up with two scenes that would lead up to said act was dumb. No one needed to know that only Justine was a virgin. No one needed to see her bound and struggling as they prepared for the ceremony only for a last minute cut off psych-out. The threat was there, the implication was intact, the act was shock horror poorly executed.

That being said, there’s also poop humor and pot jokes, so, y’know.

So, if you’re eager to see a mildly entertaining movie try really hard for almost two hours, find a theater willing to show it and go nuts. If you’re squeamish, I wouldn’t recommend it, but if you’ve seen a lot of other horror you’ll be fine. Also there’s the whole cultural insensitivity thing, so, I’ll conclude with this review with a heavy sigh.